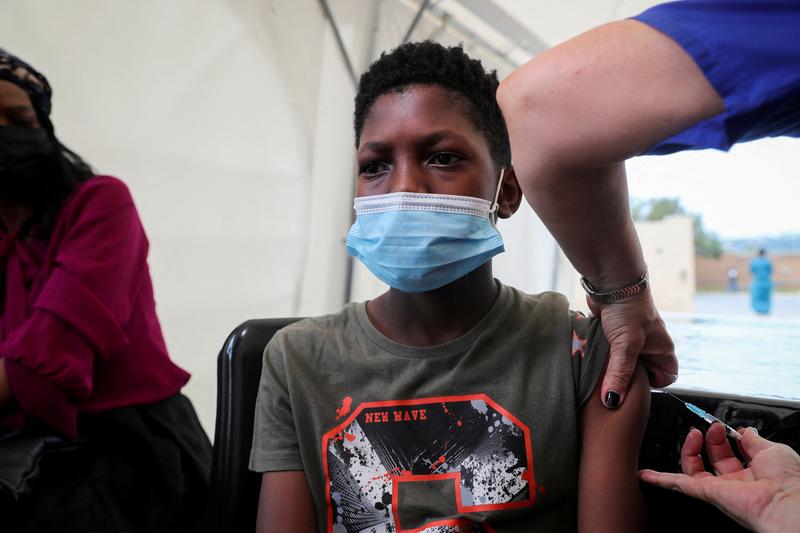 JOHANNESBURG (Reuters) – South Africa’s health department said on Monday that it was changing COVID-19 vaccination rules to try to increase uptake, as inoculations have slowed and the country has ample vaccine stocks.

The government is shortening the interval between the first and second doses of the Pfizer vaccine from 42 to 21 days and will allow people who have received two doses of Pfizer to get a booster dose three months after their second shot as opposed to six months previously.

It will also offer the option of “mixing and matching” booster jabs, with adults who were given one dose of Johnson & Johnson’s (J&J) vaccine being offered either a J&J or Pfizer booster two months after their J&J shot. Adults who received two doses of Pfizer will be allowed J&J as well as Pfizer as a third dose.

“The decision regarding which vaccine to administer as a booster should be guided by vaccine availability,” the health department said in a statement, adding that if both vaccines were available at a vaccination site, then using the same vaccine was preferred.

An exception could be made if the vaccinee requests a different booster dose or has a history of experiencing an adverse event following immunisation.

South Africa has recorded the most coronavirus infections and deaths on the African continent.

It has so far fully vaccinated 28% of its roughly 60 million population, or 42% of its 40 million adults. That is a far greater percentage than many other African countries but well short of government targets.

Its vaccination campaign, using the J&J and Pfizer vaccines, got off to a slow start due to difficulties securing early supplies, but more recently it has been dogged by hesitancy.