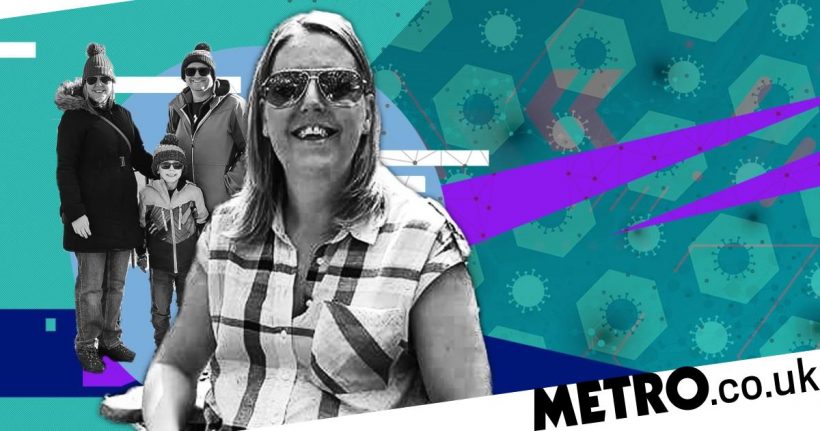 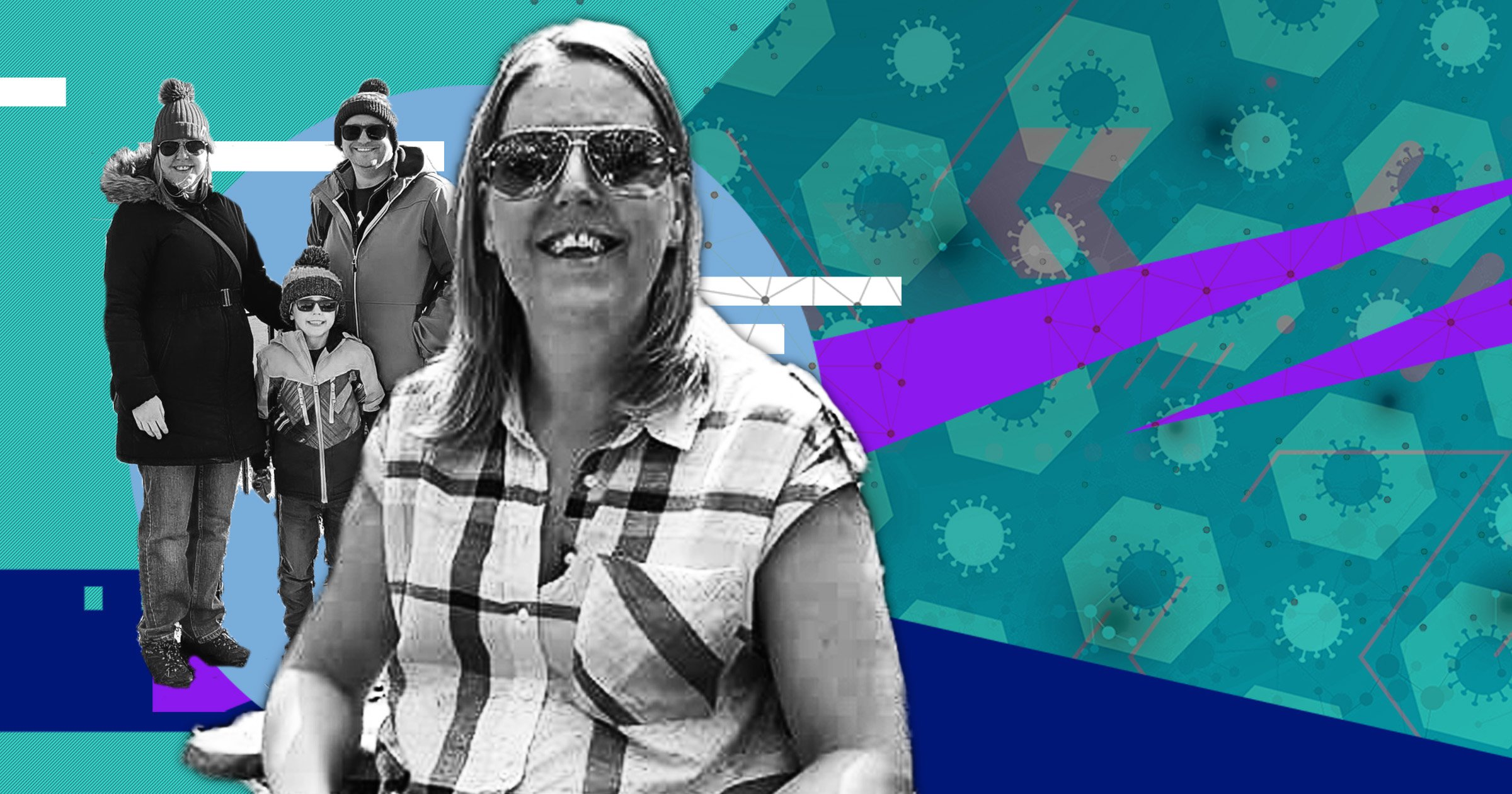 Helen Seabury was a happy, healthy and active mum to her lively little boy before Covid stole that life away from her.

The 46-year-old from County Durham now says her husband is effectively a ‘single parent’ as she only has the energy to look after her six-year-old son for 90-minutes a day, and that’s on a good day.

‘I did get really, really bad at one point where I thought, “well, what’s the point of being here?”,’ Helen tells Metro.co.uk.

‘I can’t do anything for my son. I can’t help my husband. I’m just putting more pressure on him. He’s having to look after two people. He is exhausted. He has been a single parent for two years. In a pandemic.’

Helen’s favourite activity with her son used to be taking him out to local National Trust parks, being in nature and exploring with him for hours. Now, she has to use a stool when she washes her hair in the shower because she can’t even stand for that long.

‘I loved going out for big walks with him, we would walk for miles,’ says Helen.

‘I used to be the one he was closest to, the parent he spent most of his time with. Now he is now closer to my husband. That has been really hard to see.

‘My husband is constantly telling him, “mummy’s too tired to go out for walks, mummy’s too tired to play with you.” I can have him for about an hour and a half, if he’s not running around like a lunatic – but he is very hyperactive and likes to get up at five in the morning. Which, obviously, I can’t do. So my husband has to do it every single morning. It’s extremely hard.’

Helen suspects she contracted Covid in March 2020, in the first lockdown. She describes it as mild, like having a bad flu. She wasn’t hospitalised and didn’t have any breathing difficulties.

She initially recovered and managed to get back to normal life, food shopping, working, looking after her son and taking him for days out. But she began to become more and more fatigued, and about three months after the infection she couldn’t even get out of bed.

Helen had to take three months off work to recover. Her energy returned and she managed to go back to her role as an HR business support analyst, but the fatigue soon returned and she found herself back at square one.

She needed more time off, and in February 2021 she lost her job at the company where she had worked for more than 15 years.

‘I used to work with spreadsheets and data,’ says Helen. ‘Now, I find it incredibly difficult to multitask. I just can’t do the job I used to be able to do.’

Helen’s symptoms fluctuate. She has experienced rashes, joint pain and frequent temperatures that come and go, but the constant symptoms she deals with daily are headaches, debilitating fatigue and alarming cognitive impairment.

‘I can only describe it as feeling as though there’s something that isn’t connected in my brain,’ says Helen.

‘My memory is absolutely atrocious. I’m watching films that I only saw a couple of months ago, because I can’t remember that I’ve watched them.

‘I haven’t driven for nearly 18 months. When I get what I call brain fog, I wouldn’t get in the car because I don’t feel like it’s safe to do so. On the days where I do have a clear head, the amount of mental energy it would take to drive the car will mean that I won’t have the energy to get myself home again.

‘When I last drove, I managed to get lost on my way to my dad’s – where he has lived my whole life. I couldn’t remember how to get there. So at that point, I knew I needed to stop driving.’

Helen was sent to a Long Covid clinic in February last year, where she has been impressed with the physical therapy that’s on offer, but incredibly disappointed at the lack of solid treatment options available.

‘You think you’re going to go there and get all these tests. I thought I would see a neurologist because of my brain problems, I would get my heart checked for information or have specific blood tests related to inflammation in my body. None of that has been done.’

Instead, Helen says there is a hyper-focus on mental health. While she admits her mental health has taken a hit because of her symptoms, her resulting anxiety or depression shouldn’t be treated as the root cause of her illness.

‘I had my one-year review at the end of January with a doctor at the clinic. I came out absolutely furious, and in tears,’ says Helen.

‘I asked him about the latest research I have read about the possible causes of Long Covid and he held his head in his hands and shook his head. He told me to stop reading the research papers. But he is the doctor in the clinic, he should know more than I do.

‘Instead of ordering more detailed tests because I wasn’t getting better, he just asked me about my mood. Obviously I was incredibly anxious at the time, and the only outcome of that one-year review was to say they needed to increase my antidepressants.

‘I came away absolutely devastated because I thought they were finally going to start doing something for me.’

Helen says her experience is not uncommon. She has been campaigning to raise awareness about Long Covid and as such has been speaking to many other patients in similar positions to her. She says it’s very rare that anybody is getting any actual, targeted treatment to cope with their symptoms or the possible cause of the condition.

‘I feel like we are being silenced,’ says Helen.

‘The government is telling us that schools are safe, but I’m terrified of my son getting sick. I feel like he may be predisposed to get Long Covid, because nobody can tell me why I got it.’

These days, the only thing that helps Helen have the energy to get out of bed and function even at a low level, is pacing. This means carefully monitoring her energy levels and stopping before she feels tired – in order to avoid a big crash and relapse of her symptoms.

‘My last relapse was on Boxing Day. Obviously, I overdid it on Christmas Day. I didn’t cook the dinner – my husband did everything. But I got up at half five with my son and did the whole unwrapping presents and then we had two of the grandparents over for lunch.

‘Even without doing any of the cooking, it was just too much and on Boxing Day I completely crashed and couldn’t get out of bed. That went on for three weeks.’

Helen wears a fitness tracker watch that warns her when her heart rate gets to high. This can happen in the shower, or simply standing up in a queue for too long. The watch also has a body battery function. While most people start their day with 90-100% energy, Helen typically wakes up with just 35-50% energy.

‘Pacing is all about managing your energy,’ Helen explains. ‘Both physical and mental.

‘So, having this conversation right now is mental energy, watching TV, or scrolling on Facebook, reading books, online shopping, anything where you’ve got to use your brain. Then the physical energy is doing housework, going out for walks if you’re able.’

It’s an incredibly fine balance, and Helen says that two years in, she is now learning to live with her new reality.

‘I have to have to do three slots a day of meditation – where I just listen to music and try not to think about anything. If you get your pacing wrong, you go back to the start again. We call it the roller-coaster, the Corona-coaster.

‘I know now that I’m going to have periods where I feel like I’m getting better – and then I will crash. Now I know that this is just what life is.

‘Whereas before there was hope that you would get better in six months, then 12 months, then 18 months. Then you hit the two year mark and you think – well I’m not better. So I’m not going to get better.

‘There must be something fundamentally wrong inside me that that needs fixing.’

Long Covid – what you need to know

Most infections with Covid resolve within the first four weeks. Long Covid is a term commonly used to describe symptoms that continue or develop after you’ve had the initial virus.

An estimated 1.5 million people in the UK (2.1% of the population) have reported experiencing Long Covid symptoms.

The recovery time is different for everyone. The length of your recovery is not necessarily related to the severity of your initial illness, or whether you were in hospital.

According to the latest reports, Long Covid is most common in people aged 35-69 years, women, people living in more deprived areas, those working in health care, social care, or teaching and education, and those with another activity-limiting health condition or disability.

If new or ongoing symptoms do occur and they are causing you concern, you should always seek medical advice and support.