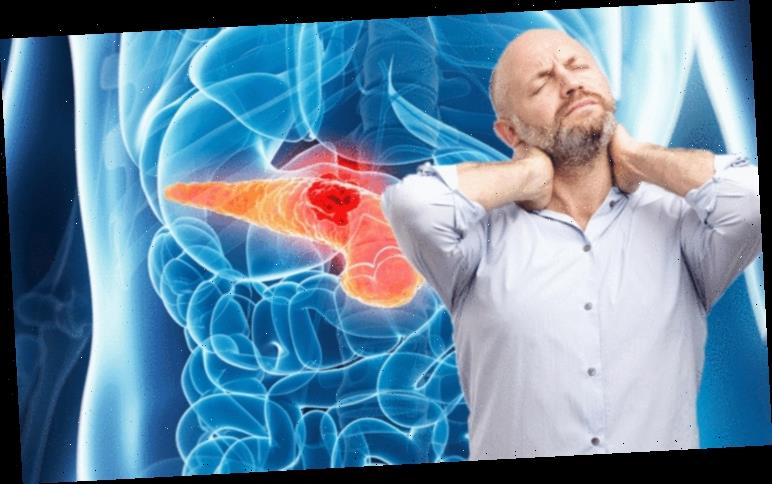 Pancreatic cancer mostly affects older men, with around half of all new cases diagnosed in people aged 75 or over. In the early stages, a tumour in the pancreas does not usually cause any symptoms, which can make it difficult to diagnose, and unfortunately, the condition is usually advanced by the time is picked up.

According to the NHS, one of the first spottable symptoms of pancreatic cancer is pain in the the back or stomach area, which may come and go at first and is often worse when lying down or after eating.

As Pancreatic Cancer UK explains, it often starts as general discomfort, tenderness or pain in the tummy area that can spread to the back.

In addition to pain in the stomach or back area, losing a lot of weight for no particular reason can be a symptom of pancreatic cancer. As the charity explained: “This is because the pancreas plays an important role in digesting food. Pancreatic cancer can affect this, causing weight loss.”

Pancreatic Cancer UK said: “Jaundice develops when there is a build-up of a substance called bilirubin in the blood.”

Bilibrubin, a yellow substance found in bile, is the waste product of the normal break down of old red blood cells.

According to the NHS, other possible symptoms of pancreatic cancer include:

The health body said: “It’s important to remember that these symptoms can be caused by many different conditions and are not usually the result of cancer.”

You may also develop symptoms of diabetes if you have pancreatic cancer, explains the health site, because the tumour can stop the pancreas producing insulin as it normally would.

You should contact a GP if you’re concerned or these symptoms start suddenly, warned the health site.

How to reduce the risk

It is not fully understood what causes pancreatic cancer but certain lifestyle factors may increase a person’s risk of developing the deadly condition, so it is imperative to lead a healthy lifestyle to minimise the risk.

Losing weight can also reduce the risk, with expert opinion suggesting that in the UK around one in six pancreatic cancer cases could be prevented if people all kept to a healthy weight.

Research has also suggested poor dietary dietary decisions may also influence a person’s risk, with one study in particular suggesting that eating an extra 50g of processed meat, which is equivalent to one sausage, every day would increase a person’s risk by 19 percent.

Researchers in Sweden, who analysed data from 11 trials and 6,643 patients with pancreatic cancer, also found having an extra 100g would increase the risk by 38 percent.

While the risk of developing pancreatic cancer remains relatively low, the World Cancer Research Fund has advised people to completely avoid processed meat in a bid to reduce the risk.