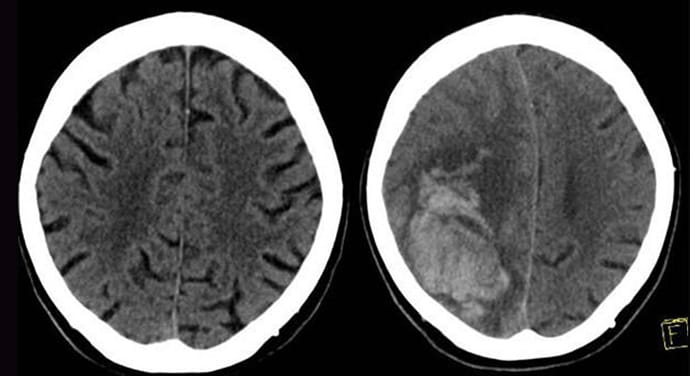 He noted that estimates of DH risk after head trauma reported in the literature vary widely from less than 1% to 10%.

The team reviewed records for 1046 patients (547 women and 499 men) with an average age of 77.5 years who were taking antiplatelet and anticoagulant medications, including older classes and newer direct oral anticoagulants (DOACs). Patients were included if they had a repeat CT to look for delayed hemorrhage after an initial negative CT scan.

They found a 1.7% incidence of DH (22 patients) and 0.3% overall mortality from DH (four patients). Patients taking warfarin and clopidogrel had a higher rate of DH (3.2%), compared with 0.9% in the group taking DOACs (P < .01). All four deaths were in the clopidogrel/warfarin group.

The average time to DH was 22 hours and all 22 patients with DH required admission, Chang said.

In another finding, patients taking any blood thinners along with aspirin had a significantly increased risk of delayed hemorrhage. About a third of the patients were taking aspirin in addition to anticoagulants and “of the bleeds, nearly two thirds were in patients with concurrent aspirin therapy,” Chang said.

“We recommend repeat imaging should be obtained with every patient with anticoagulant or antiplatelet medicines who [is] also taking aspirin,” Chang said.

Benton R. Hunter, MD, professor of clinical emergency medicine at Indiana University School of Medicine in Indianapolis, who was not involved in the study, told Medscape Medical News that the study’s findings are consistent with previous findings, but he’s not convinced patients taking the older medications should be routinely considered for repeat CT scans.

“The risk of meaningful or important delayed hemorrhage is extremely low, regardless of what anticoagulant or antiplatelet is used,” he said. “I will say that there’s less data on patients taking multiple agents, such as aspirin plus another anticoagulant, and while I would not advocate for routine observation or repeat scans in those patients either — and basically never do it — it is probably reasonable to have a little lower threshold to either observe or rescan them if the clinical scenario seemed higher risk.”

He noted study participants were older and said social factors, such as whether a person is elderly and lives alone, might determine whether a repeat scan is necessary.

He said hospitals vary greatly in their practices in terms of repeat CT scans after head injuries, but routine repeats are more common in Europe.

He also said he doesn’t think warfarin and clopidogrel should be lumped together as having similar effects in the older medicine group. “In general,” Hunter said, “clopidogrel has not shown a very high rate of delayed hemorrhage.”

Hunter said though the authors found a slightly higher incidence of delayed hemorrhage and mortality in this patient group than previous research has shown, “The totality of data would still suggest that routine observation and/or repeat head scanning is very low yield and unnecessary in most patients.”

Chang and Hunter have declared no relevant financial relationships.

Marcia Frellick is a freelance journalist based in Chicago. She has previously written for the Chicago Tribune, Science News, and Nurse.com, and was an editor at the Chicago Sun-Times, the Cincinnati Enquirer, and the St. Cloud (Minnesota) Times. Follow her on Twitter at @mfrellick.