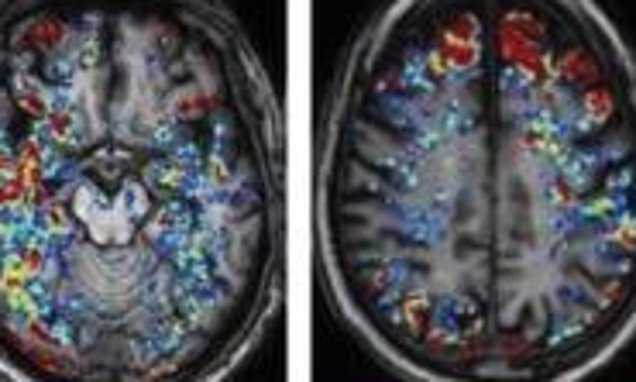 Scientists have a new theory for what may cause dementia as the brain ages – and a way to reverse it, a new pair of studies suggest.

Scientists have been unable to work out the exact cause of Alzheimer’s, the most common form of dementia, and without knowing exactly whats driving the disease, it’s even harder to treat.

Scientists have long known that, with age, the blood-brain barrier – a wall of dense cells and blood vessels that protects the brain from any invaders in the blood that don’t belong there and could damage the fragile, crucial neurons.

Previously, it was believed that aging itself caused brain cells to die, but University of California, Berkeley researchers found that it may be the leakiness of the blood-brain barrier that allows in harmful substances that then, in turn trigger cell death and ‘inflammatory fog.’

And researchers at Isreal-based Ben-Gurion University of the Negev found that that inflammatory fog disrupts brain waves in mice in a similar fashion to what’s seen in EEGs scans of people who have Alzheimer’s.

As it happened, a California chemist was able to create a drug that can pass through the dense blood-brain barrier, restoring brainwaves in mice to look like those of healthy younger animals – suggesting a potential treatment for dementia.

The barrier protection the brains of both humans (top) and mice (bottom) become more permeable with age (left to right) allowing harmful molecules ((colors, in human brains) from the blood to seep in – a pattern scientist now think may trigger inflammation and dementia

In the US 5.8 million people have Alzheimer’s, and as the population ages, the number of sufferers will only grow.

Currently, there’s little hope for these people, whose memories and cognitive functions decline steadily and heartbreakingly until the disease eventually kills them.

For decades now, plaques of abnormal, damaging proteins called amyloid beta, have been the prime suspect in Alzheimer’s disease.

But attempts to address the plaques have led only to failed clinical trials and disheartened families, patients and scientists.

While some researchers are pressing on to find deeper layers of the amyloid story, others have begun to suggest other causes or pathways to treatment.

The latest alternative being investigated is the seep of out-of-place substances into the brain.

Nearly 60 percent of people over the age of 70 have leaky blood-brain barriers, discovered Dr Alon Friedman of Ben-Gurion University of the Negev in Israel.

Neurons are highly sensitive types of nerves, and contact with any foreign substance can trigger devastating inflammation and cell death.

‘We tend to think about the aged brain in the same way we think about neurodegeneration: Age involves loss of function and dead cells,’ said Dr Kaufer.

‘But our new data tell a different story about why the aged brain is not functioning well: It is because of this “fog” of inflammatory load.’

After this discovery, she, Dr Friedman and Dr Dan Milkovsky – also of Ben-Gurion – used MRI and EEG brain scans to show that the brain leaks triggered brain wave disruptions in animals that mimic those seen in humans with Alzheimer’s and other cognitive problems.

Using these, they could pinpoint just where the leaks were happpening.

‘We now have two biomarkers that tell you exactly where the blood-brain barrier is leaking, so you can select patients for treatment and make decisions about how long you give the drug,’ said Dr Kaufer.

‘You can follow them, and when the blood-brain barrier is healed, you no longer need the drug.’

In their prior research, Drs Friedman and Kaufer had discovered that one particular substance that leaks into the brain effectively poisons a particular receptor there, making a young mouse’s brain rapidly turn old and demented.

But if they blocked the receptor, called TGF-β, the blood molecule, albumin, couldn’t do anything to the nerves.

Meanwhile, a chemist in Palo Alto, California, has developed a drug so tiny that it can slip through the usually impenetrable blood-brain barrier to mute the receptor in crucial parts of brain cells.

The effects in mice were astounding.

The old animals’ brains appeared like those of young animals, and they completed tasks as if they’d never had dementia or similar brain damage.

‘We got to this through this back door; we started with questions about plasticity having to do with the blood-brain barrier, traumatic brain injury and how epilepsy develops,’ Dr Kaufer said.

‘But after we’d learned a lot about the mechanisms, we started thinking that maybe in aging it is the same story.

‘This is new biology, a completely new angle on why neurological function deteriorates as the brain ages.’

On the heels of their discovery, the group of scientists have teamed up and formed a company to try to create a drug that will have the same effects for the millions of humans suffering dementia.