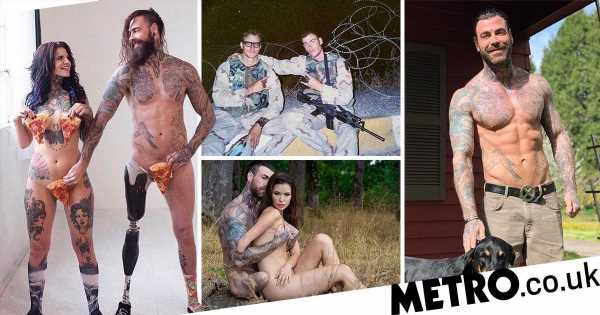 American soldier James Marshall Ramsey bravely fought in the war in Iraq and Afghanistan after 9/11.

The 38-year-old from Portland, Oregon, was in the military for over six years.

Managing to avoid serious injury on the battlefield, he finished his tour and was excited to head home to his family and begin the next chapter of his life.

The day after enjoying the reunion, James decided to go for a bike ride. But it ended in disaster as James’ bike lost control and hit a corner.

James ended up losing a leg and had to wear a prosthetic limb.

But during his tumultuous life, James had a constant love of tattoos, having gotten inked during his first few years in the military.

And now, he has found a new purpose in life as a tattoo model.

Rising to the rank of Sergeant, he was initially stationed at Fort Hood, a giant US Army base in Texas.

Then he was deployed to the Gulf region with the U.S Army. His dad and granddad had also been in the army so re-enlisting after the September 11 attacks was a no-brainer.

Later, he was sent to Iraq where we served for a year before being deployed to Afghanistan.

When he finished that tour, he headed home but he day after he landed, tragedy struck.

‘I decided to take my bike for a spin. And in hindsight, it probably wasn’t a good idea,’ he said.

‘I didn’t realize that last ride was going to cost me so much. I was taking a corner a bit too fast and lost control.

‘After that, it went dark for me.’

When he eventually came around, James was dazed and disoriented, with distraught family members at his bedside.

‘My mum told me I kept grabbing at my leg and mumbling “what the hell happened?”‘

‘They told me I had been in a very bad accident and my stomach dropped when I realised what that meant.’

And part of that involved showing off his sweet collection of tats.

He now has two full sleeves, arm, coverings, a full back piece, his throat and the sides of his neck and almost an entire torso covering.

‘My favourite tattoo is definitely my back,’ he added.

He has now been modelling for five years and makes money off advertising.

The amputated leg has definitely helped, he said: ‘I’ve gained more exposure from being an amputee.’

When asked what he misses the most about his time in the military, James joked: ‘My leg, I miss that sweet-ass leg.’