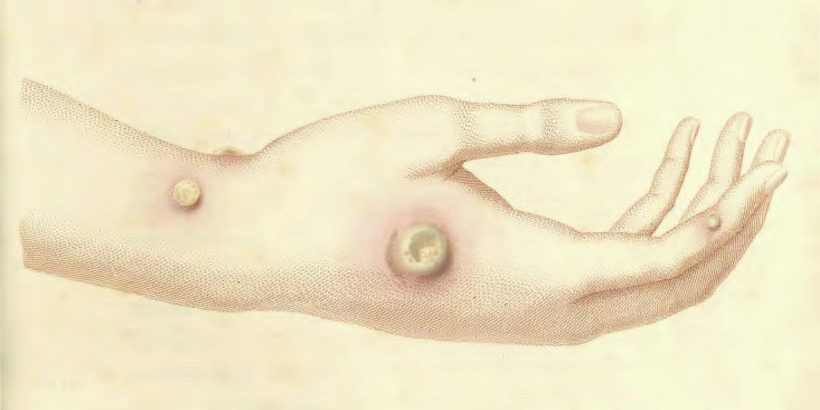 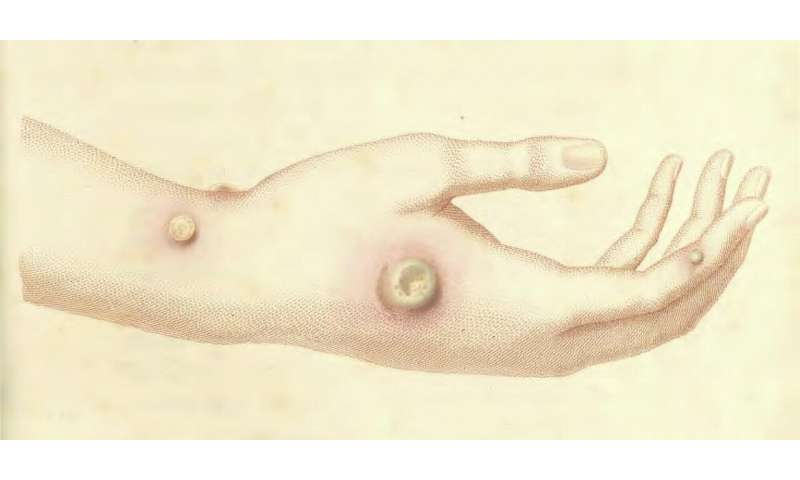 With the ongoing speculation around the development of a viable COVID-19 vaccine, there’s no better time to revisit the history of vaccination.

One foundational text of modern immunology and vaccination, housed in the University Libraries’ Special Collections, offers a window into both the history of inoculation and anti-vaccination sentiment. Published in 1798, this first-edition copy of Edward Jenner’s “An Inquiry into the Causes and Effects of the Variolae Vaccinae, a Disease Discovered in Some of the Western Counties of England,” describes how smallpox, one of the deadliest diseases in history, was cured by unexpected means.

“Vaccinations are a more recent development than many realize, and its early success was far from guaranteed,” Lemley said. “By examining this text, we can revisit history and remind ourselves that progress usually comes sooner rather than later and that effective treatments often come from the least expected places.”

In the following Q&A, Lemley discusses the importance of Jenner’s book, it’s significance in medical history, and how it connects to our current experience with the coronavirus pandemic.

Q: Can you tell us about Jenner’s book?

A: Published in 1798, Edward Jenner’s “An Inquiry into the Causes and Effects of the Variolae Vaccinae,” announced a new method of inoculating against smallpox. This book, of which CMU’s Special Collections holds a beautiful first-edition copy, records the invention of modern vaccination. Jenner’s method involved injecting what he calls “morbid matter” (or, pus) from festering cowpox sores under the skin of his patients. Jenner’s experiments proved that infecting patients with cowpox immunized them against the far deadlier smallpox virus. Before Jenner’s “vaccine,” a dangerous alternative existed that involved injecting the smallpox virus itself. This was dangerous because it wasn’t always successful and sometimes resulted in the death of the patient. Jenner’s innovation was to use a less lethal, related disease as an inoculant. This discovery would lead to the development of modern attenuated vaccines.

Q: What can history teach us about vaccinations?

A: Science and medicine thrive on progress, innovation, and forward thinking. So what does Jenner’s book, printed more than 200 years ago, have to offer us, particularly at this moment of mass quarantine and medical crisis? For one thing, Jenner’s book gives a certain kind of reassurance—hope, even. In Jenner’s rural practice, which brought him in contact with farmers and farm laborers, Jenner heard rumors that milkmaids who contracted cowpox from cattle were thereafter immune from the far deadlier smallpox, a terrifying scourge of the early modern world that killed about 30% of those it infected, and far more among the native populations of the Americas. Those that survived infection were marked for life by disfiguring scars—the pocks that give “poxes” their name. In other words, smallpox had been a harrowing fact of life for centuries, and then Jenner’s book announced a cure that had been hiding in plain sight in the pastoral economy of provincial England. Point being: cures and treatments come from unexpected places, and human ingenuity is often the most effective instrument in ferreting these out. In fact, I’ve just read, with some welcome amusement, that one promising source for an effective COVID-19 therapy is a llama named Winter. The New York Times says that, “antibodies from Winter, a 4-year-old llama with great eyelashes, have neutralized coronavirus and other infections in lab experiments.” Jenner’s legacy of pastoral therapeutics has evidently led us from a bovine to a camelid deliverance. 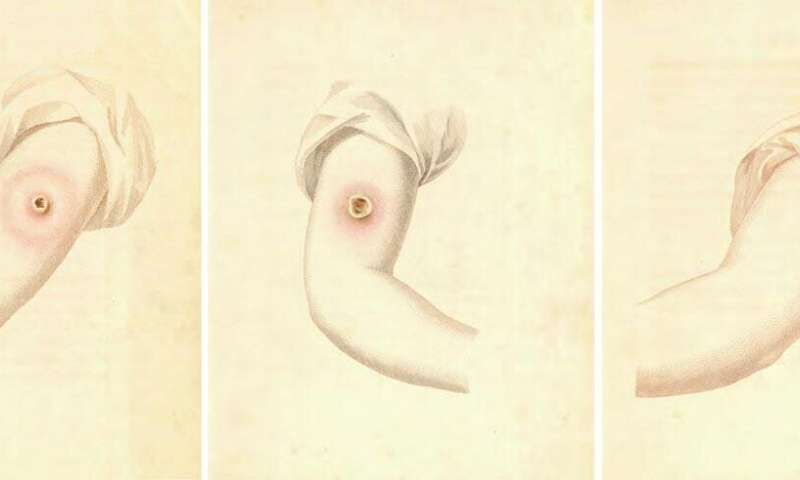 Q: Is there anything about modern vaccination that we still have from Jenner? And where does the term vaccine come from?

A: As a literary scholar enamored of language’s startling afterlives, I’m fascinated by the dead or fossilized metaphors that populate the lexicon of modern medicine. The words and images used to describe vaccination are no exception. We borrow the term vaccine from Jenner, for instance, which derives from the Latin word for “cow” (vacca)—the Latinate name for cowpox that Jenner coined to fill out the title of his treatise, “Variola vaccinae,” simply means smallpox of the cow. While the phrase “herd immunity” is of a later date, potentially coined in the 1930s, there’s something of Jenner there, too: modern immunology originated in a herd of cattle.

We also borrow conceptually from Jenner in thinking through, and debating, the ethics of vaccination. Vaccines were controversial from the beginning. Jenner had difficulty publishing his findings and failed to convince even one well-to-do Londoner to undergo the new procedure. Of course, Jenner had none of it. On the “Inquiry’s” title page appears a short epigraph from Lucretius, the radical Roman poet who defended atheism and atomism in the first century BCE. In paraphrase, the line reads, “what better test is there than the senses?” The evidence for vaccination’s benefits, Jenner’s epigraph suggests, was plain to see; and those that failed to acknowledge its life-saving potential were luddites rejecting nature’s bounty. If there’s one thing we’ve lost since Jenner, it’s his belief that vaccination offered a natural, even wholesome intervention that could restore humankind’s preordained immunity. In the preface to the Inquiry, Jenner blames the 18th century’s proliferation of disease to “[t]he deviation of Man from the state in which he was originally placed by Nature.” Jenner believed that vaccination offered an antidote for the depredations of modern life. Current disinformation promoted by antivax groups inverts this view.

Q: Why is this particular book significant in the history of medicine?

A: The history of medicine has always been bound up with the history of books, in part because books were (and remain) one of the most efficient technologies for conveying specialized knowledge across reaches of space and time. Early anatomy books were massive, copiously illustrated things, as beautiful in appearance as they were futuristic in content. Jenner’s book operated in this established mode, but there are few works in the history of medicine that can claim such a transformative impact. Another book in CMU’s Special Collections, William Harvey’s “Anatomical Exercises” (1653), was the first to accurately describe the systole and diastole phases of the cardiac cycle—a more important discovery, perhaps, than Jenner’s. However, it’s difficult to draw a direct line from Harvey’s discovery to the preservation of millions of lives. The opposite is true in Jenner’s case. That’s not to say that Jenner invented immunization—earlier forms of the procedure, known as insufflation and variolation, had been practiced as early as the 16th century in China, and perhaps even earlier in Africa and the Middle East. But from Jenner onward, you can trace successive refinements that would lead to the final eradication of smallpox in 1980 and the work of Jonas Salk in the 1940s and 1950s on a safe polio vaccine in our very own city of Pittsburgh.

Q: The book contains highly vivid illustrations of cowpox: What did these contribute to medical illustration?

A: Having failed to publish his findings in the Royal Society’s “Philosophical Transactions,” England’s leading scientific journal at the time, Jenner self-published the “Inquiry.” Because of this, Jenner was able to oversee the printing of the book and to work closely with the artists and engravers responsible for the illustrations of pox-infected skin that accompany his text. Medical advancements have always relied on accurate depictions of disease, visual symptoms and disfigurements. This presented a challenge in the early modern world before the availability of photography. The illustrations that accompany Jenner’s text are nevertheless hyper-realistic, each one printed from an engraved copperplate and finished by hand in watercolors to show the hues and contours of the dermic sores caused by a successful vaccination. Jenner’s “Inquiry” is as much a piece of art, then, as it is a scientific document. I, for one, find the illustrations in Jenner’s work to be startlingly beautiful, even if a bit stomach-turning.

Q: How did CMU acquire this book?