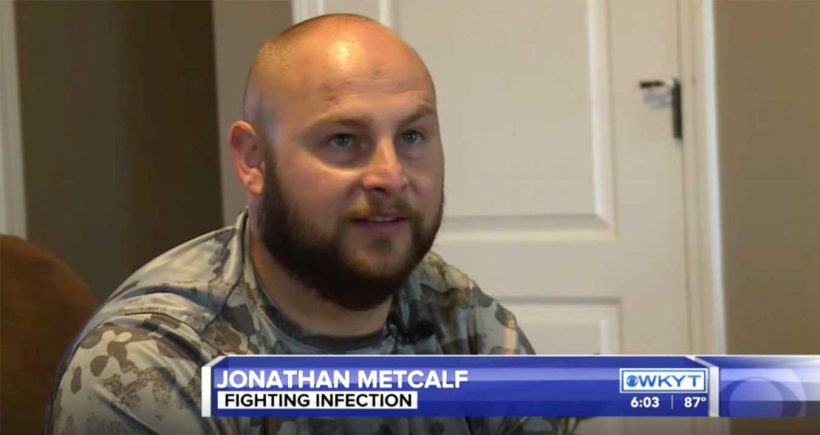 Jonathan Metcalf went for a swim in Kentucky’s Green River while on a camping trip with his family over Memorial Day weekend.

He never imagined that his attempt to cool off would expose him to a flesh-eating bacteria, leaving him ill and unable to work for several weeks.

“I’ve been in mudholes, creeks, four-wheels my whole life, probably every body of water there is. Most of them I was fine in,” Metcalf added. “This never would have crossed my mind something like this could have hit me. It’s something you see on Facebook that you never think could be in your house.”

RELATED: What to Know About Necrotizing Fasciitis — the Flesh-Eating Bacteria Showing Up at Beaches

He told the outlet that after taking a dip in the river, he started to experience pain near his groin as if someone had kicked him. The next morning he knew something was wrong when the pain got worse and he began to feel dizzy and feverish.

“It got to where I couldn’t walk,” Metcalf told WKYT.

That’s when he noticed something forming on his upper left thigh, and he and his family decided to cut their trip short. He went to the doctor, who diagnosed him with necrotizing fasciitis, a rare but sometimes deadly disease in which bacteria attacks the skin and soft tissue, causing decay — and potential organ shut-down. Metcalf spent two weeks in the hospital where doctors removed a six-inch portion of his thigh.

The electrician is now waiting for a skin graft, and hopes to be able to return to work next month.

At least nine other people have contracting flesh-eating bacteria this year. In all cases, after spending time in or near the water in places like Florida, Texas and Maryland, the victims fell ill and had to be hospitalized, some requiring surgery. Three people died after contracting the the disease.

While cases of necrotizing fasciitis increase in the summer because the parasite thrives in warmer waters, it is actually a very rare disease, with just 20,000 cases a year. Chances of contracting it are slim, especially if you’re healthy and have a strong immune system, according to the Centers for Disease Control and Prevention.