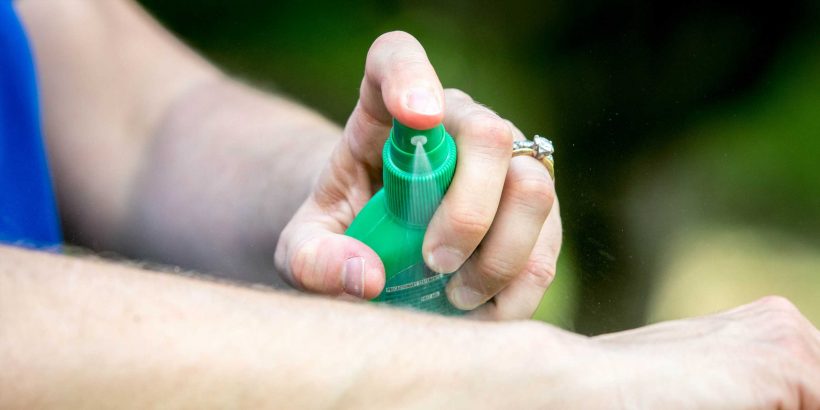 With the pros of the outdoors—hiking, camping, bonfires, you name it—come the cons: bug bites. And this year, those itchy, blotchy, and uncomfortable bites may be more dangerous than ever. More than triple the amount of people have gotten sick from mosquito, flea, and tick bites from 2004 to 2016, according to a report by the CDC.

They speculate that climate change has something to do with this. Because winters have been shorter, and summers are hotter and longer, the climate is more inviting for these “vectors” (the disease-carrying bugs). Oy.

All of this potential for sickness calls for a heavy-duty bug spray. The pesticide DEET, studies have shown, is an insect-repelling powerhouse. iI’s known to be stronger in repelling and longer-lasting than any other ingredient—but many people have questions and concerns about putting the chemical on their skin.

Here’s what medical and environmental experts have to say about using DEET to ward off the bugs.

What is DEET, exactly?

DEET (its official chemical name is N, N-diethyl-m-toluamide) is the active insecticide ingredient in many bug sprays and repellents, explains Ashish Sharma, MD, a board-certified internal medicine physician at Yuma Regional Medical Center in Arizona. But it doesn’t necessarily kill bugs on contact.

What it essentially does is weakens the insects’ sense of smell, so that they can’t detect human’s breath and sweat odors. “In some cases, it actually does repel the insects right when they come in contact with the chemical,” Dr. Sharma says. So with DEET, you’re better protected against the bugs biting you and causing mosquito-borne illnesses, such as malaria, West Nile virus, or Zika, or tick-borne illnesses, such as Rocky Mountain spotted fever and Lyme disease, Dr. Sharma adds.

How safe is DEET?

The panic about DEET as an ingredient started in the 1980s, when it was thought to be associated with brain damage or seizures, especially in children. But a concrete connection wasn’t proven, according to research. That same research notes that the risk of getting a severe illness like Zika, malaria, or dengue from an insect when you don’t apply bug repellent is greater than the potential for the repellent to cause any harm.

Skin irritation is also a concern for some people. But the general safety of DEET as a chemical has to do mostly with how much of it you’re exposed to. “If overexposed, then some people can develop skin reactions such as rashes, blisters, and skin irritation,” Dr. Sharma says. Make sure you consult a dermatologist if you have an adverse skin reaction to insect repellent. If ingested, it can cause seizures or confusion, but dangerous symptoms from skin contact are highly unlikely.

And DEET is even safe for children, says Dr. Sharma. But because it’s not safe to ingest, you’ll want to use a natural alternative for babies under six months, says Dr. Salas-Whalen, and make sure older kids aren’t applying it themselves so they don’t get any in their mouths.

Is DEET safe for pregnant women to use?

Yep. As for pregnant women, there isn’t sufficient evidence that using bug spray with DEET can harm the fetus. Actually, Dr. Sharma points out, the CDC recommends DEET for prevention of the Zika virus, which can be deadly for pregnant women.

It just may be wiser to use a product that contains slightly less DEET to cut back on the chemicals. “Limited study evidence suggests insect repellent containing 30 percent DEET or less is generally safe in the second and third trimesters,” Dr. Sharma says.

Is there any link between DEET and cancer?

There’s been concern about DEET as a potential cancer-causing chemical, mainly because it is a pesticide, but there hasn’t been a definite link in research. “Currently DEET is not classified as a carcinogen,” says.Rocio Salas-Whalen, MD, a New York City-based endocrinologist. 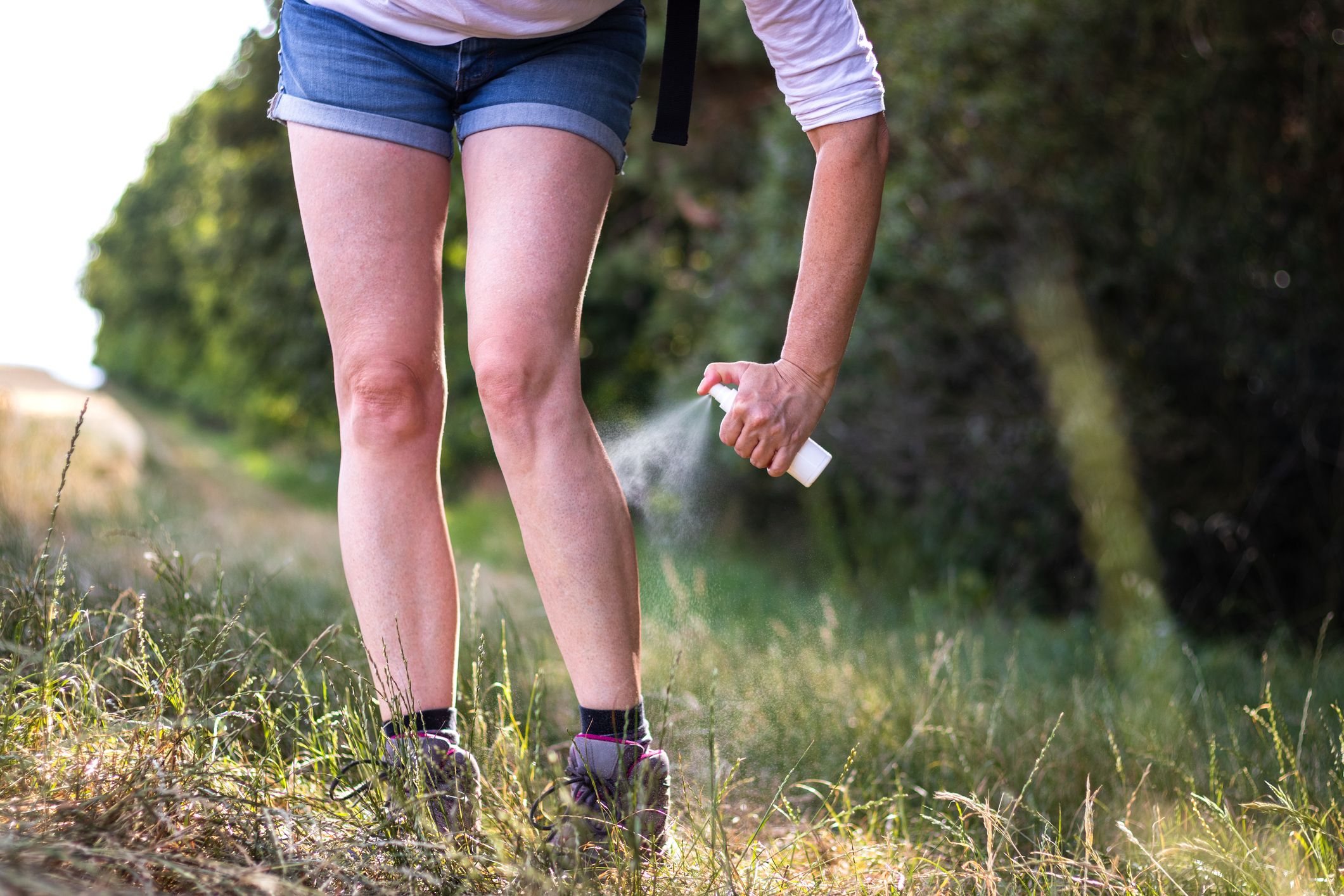 “According to the CDC, animal studies have not found an increase in tumors in research subjects who were given oral DEET tablets or who had it applied to their skin,” Dr. Salas-Whalen adds.

How does DEET affect the environment?

In short, DEET can’t do major damage to the environment, according to the EPA.EPA documents explain that DEET doesn’t hang around in the air for even a full day, as it’s sensitive to light and tends to dissolve in the atmosphere. Whether you’re swimming at the beach or working in your yard, the DEET from your bug spray isn’t likely to affect fish, aquatic plants, or wildlife in any major way, the EPA states.

In water, there’s not a huge level of concern, and on land, it’s highly unlikely that the spray applied directly to your skin can cause damage to any creatures or plants in the ecosystem around you.

What’s the best way to use bug spray with DEET in it?

First and foremost, only apply bug spray to your clothes and any skin that’s exposed to the air. And it should be a given, but never spray it directly on your face (spray it on your hands first, says Dr. Sharma), to avoid risk of ingesting it.

DEET bug spray up to a concentration of 30 percent is safe and effective to use.

DEET also can interact with sunscreen if you apply at the same time—the chemicals can be more easily absorbed by your system, says Dr. Sharma.He recommends waiting 30 minutes after applying sunscreen to apply bug spray.

How much DEET do you need to be protected?

You definitely have to check packaging for the exact percentage of ingredients in a bug spray product—an insect repellent may have anywhere from 4 to 100 percent DEET. The higher the concentration of DEET, the longer you’re protected, and the less frequently you’ll have to reapply, Dr. Sharma says (so for a weekend camping trip, you may want to go slightly higher).

But 100 percent DEET may be too much of the chemical for your body if it causes skin irritation. Generally speaking, “DEET bug spray up to 30-percent concentration is safe and effective to use,” he says.

What other alternatives to DEET are there?

For people who can’t stand the smell of DEET, find that it irritates their skin, or are still apprehensive about putting the chemical near their skin, there are other options.Picaridin is a compound that’s basically an imitation of the plant that produces black pepper. It’s not completely natural, but may be an alternative with less of an odor and greasy feel on the skin than DEET. It works in a similar way to DEET, sending insects away from your scent to keep them from biting you.

Citronella oil is also considered one of the EPA’s minimum risk pesticides for human health and the environment. Or, if you want to go completely plant-based, you can. In that case, go for an essential oil like lemon eucalyptus, peppermint, geraniol, or soybean oil. You’ll have to reapply more frequently—about once an hour—for the plant-based sprays to be equally as effective as DEET. And remember to take other precautions against ticks and mosquitoes when you’re outside on a summer night, like wearing long sleeves and long pants.

The bottom line: DEET is safe for use for most children and adults, and it’s the best defense against mosquito and tick-borne illnesses.