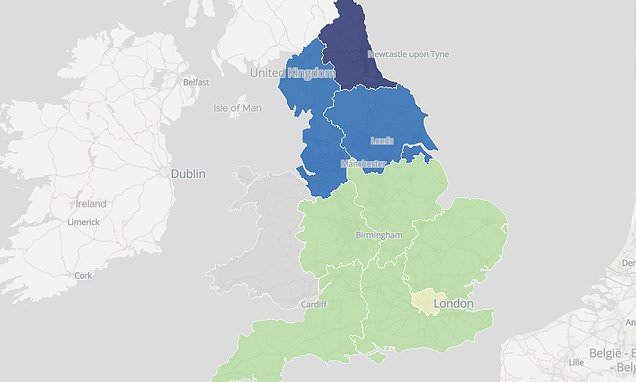 Interactive map reveals how many people get cancer in your region: Official data shows a clear geographical divide in England with diagnosis rates the highest in the North East

The number of people diagnosed with cancer rose by more than two-and-a-half thousand between 2016 and 2017 – but survival rates are on the up as well.

People in the North East are worst affected, with one case for every 154 people, while cancer is less common in London, with a diagnosis for every 176 people.

The north-south divide is shown clearly on an interactive map revealing where different types of cancer are most common.

While most forms of cancer are found most often in the north, the rift is reversed for certain diseases – notably pancreatic, prostate and breast cancer – which are more common in the south. 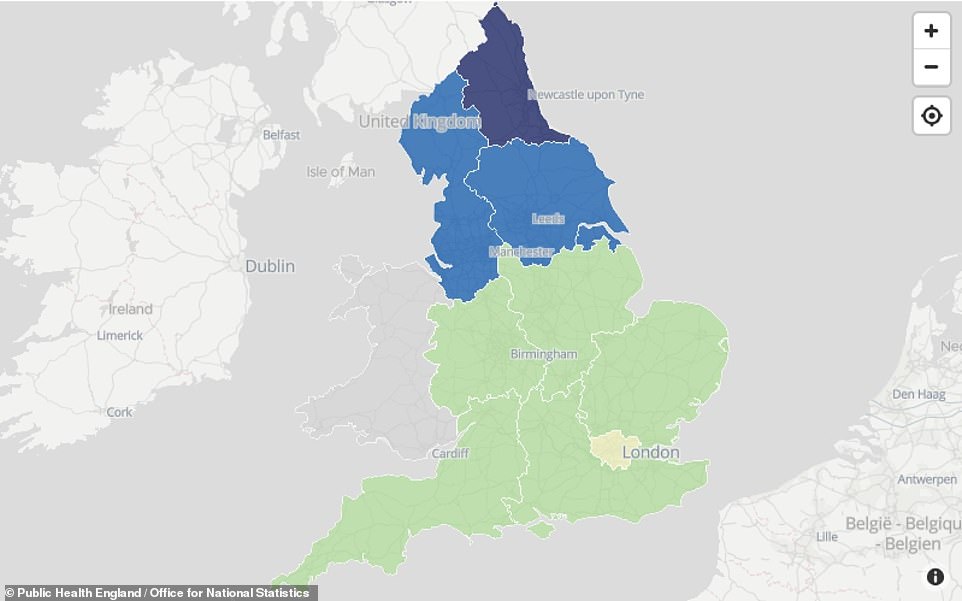 Cancer rates in the North East are the highest in England, with one cancer case being diagnosed for every 154 people in 2017. They are lowest in London where the rate is one for every 176 people and, generally, the south fares better than the north 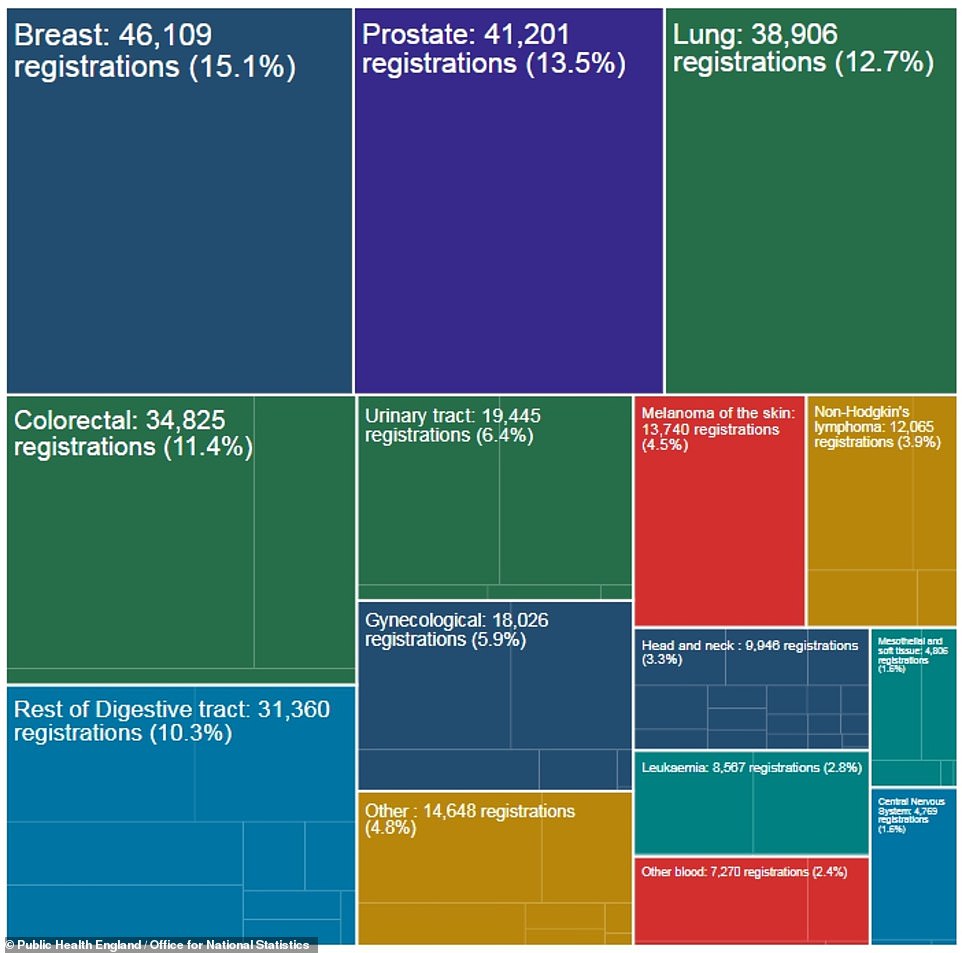 Breast, prostate, lung and bowel cancers made up more than half (52.6 per cent) of all diagnoses of the disease in England

An annual report by the Office for National Statistics showed there were 270 cancer deaths per 100,000 people in England in 2017.

But while survival improved, the number of people being diagnosed rose by approximately 0.8 per cent.

Breast cancer is the most common form of the disease in England, making up 15 per cent of all diagnoses.

It goes against the general trend of rates being worse in the north, with women in the South East and South West, with rates lowest in Yorkshire and the Humber.

For both sexes more than half of cases were accounted for by just three types of the disease. For men, this was prostate, lung and bowel cancer, and for women it was breast, lung and bowel.

The frequency of different forms of the disease also varied between different age groups.

Of the 1,459 cancers diagnosed in under-14s, the most common were leukaemia, brain tumours, non-Hodgkin lymphoma and kidney cancer.

Among 15 to 44-year-old males, testicular cancer was the most common, and females in the same age group were worst affected by breast cancer – breast cancer remained the worst for women in the 45 years and older.

For men over 45, prostate cancer became the biggest concern, making up a third of all cancer in men aged 65 to 74.

WHAT IS BREAST CANCER, HOW MANY PEOPLE DOES IT STRIKE AND WHAT ARE THE SYMPTOMS?

What is breast cancer?

Breast cancer develops from a cancerous cell which develops in the lining of a duct or lobule in one of the breasts.

When the breast cancer has spread into surrounding breast tissue it is called an ‘invasive’ breast cancer. Some people are diagnosed with ‘carcinoma in situ’, where no cancer cells have grown beyond the duct or lobule.

Most cases develop in women over the age of 50 but younger women are sometimes affected. Breast cancer can develop in men though this is rare.

The cancerous cells are graded from stage one, which means a slow growth, up to stage four, which is the most aggressive.

A cancerous tumour starts from one abnormal cell. The exact reason why a cell becomes cancerous is unclear. It is thought that something damages or alters certain genes in the cell. This makes the cell abnormal and multiply ‘out of control’.

Although breast cancer can develop for no apparent reason, there are some risk factors that can increase the chance of developing breast cancer, such as genetics.

What are the symptoms of breast cancer?

The usual first symptom is a painless lump in the breast, although most breast lumps are not cancerous and are fluid filled cysts, which are benign.

The first place that breast cancer usually spreads to is the lymph nodes in the armpit. If this occurs you will develop a swelling or lump in an armpit.

How is breast cancer diagnosed?

If you are confirmed to have breast cancer, further tests may be needed to assess if it has spread. For example, blood tests, an ultrasound scan of the liver or a chest x-ray.

How is breast cancer treated?

Treatment options which may be considered include surgery, chemotherapy, radiotherapy and hormone treatment. Often a combination of two or more of these treatments are used.

How successful is treatment?

The outlook is best in those who are diagnosed when the cancer is still small, and has not spread. Surgical removal of a tumour in an early stage may then give a good chance of cure.

The routine mammography offered to women between the ages of 50 and 70 mean more breast cancers are being diagnosed and treated at an early stage.