Two and a half years ago, former professional cricketer and tech entrepreneur Matt Berriman attempted to take his own life. 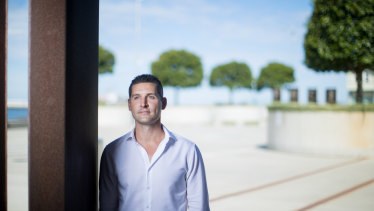 Mental Health Australia chair Matt Berriman, a suicide-attempt survivor, is calling for a target to reduce suicide deaths by 25 per cent by 2025.Credit:Simon Schluter

“I just got one night to my wit’s end and I attempted and luckily I woke up,” he said.

Mr Berriman still remembers a mental health nurse at the hospital telling him that survivors often went on to make a difference they would never have thought possible.

Today the 37-year-old – who in December was appointed chair of Mental Health Australia, the peak non-government body representing the sector – will launch a campaign calling on the federal government to set a national target to reduce suicide by 25 per cent by 2025.

However, the federal government and the peak body for suicide prevention in Australia oppose that target, saying zero deaths is the only acceptable number.

In 2020, there were 3139 deaths by suicide in Australia, about nine lives each day. It is the leading cause of death for Australians aged 15 to 44.

The target comes as The Age and the Herald release the second episode of the podcast about youth mental health, Enough. This episode discusses suicide and suicidal thoughts.

A Resolve poll found one-in-four 16 to 24-year-old Australians had thought about suicide over the past two years and 15 per cent had attempted self-harm.

Mr Berriman said the federal government lacked accountability on mental health and a suicide reduction target would determine whether preventative strategies were working.

“I come from a business background where you have KPIs, but with mental health my view is there is very little accountability,” he said.

He pointed to Scotland, where in 2002 the government set a target to reduce the suicide rate by 20 per cent over a decade to 2013. It achieved an overall 19 per cent reduction.

“A target is a first pillar of saying mental health needs a change, it needs accountability: 3139 lives is way too many.”

But Health Minister Greg Hunt said every single life lost to suicide was one too many.

“Our government recognises the devastating impact it has on individuals, families and communities, and is committed to working towards zero suicides,” he said.

“Zero is the only acceptable target as it recognises the value of each and every life.”

Suicide Prevention Australia chief executive Nieves Murray said the peak body did not support targets as they distracted from the real issue.

“We need action, not accounting. It’s time to implement the reforms we know save lives not to go back to the drawing board on a figure,” Ms Murray said.

“There is a risk that targets may simplify a very complex issue such as suicide prevention.”

But Mr Berriman said a target of zero was an “unrealistic motherhood statement”, akin to a zero road toll.

“Towards zero is where the government goes because they want to avoid accountability,” he said.

Beyond Blue would not comment on a target, but chief executive Georgie Harman welcomed Mental Health Australia’s “rallying cry for stronger accountability and transparency”.

A Lifeline spokesperson said: “Our vision is of an Australia free of suicide, and we remain committed to working towards zero suicides.”

Alongside a suicide prevention target, Mental Health Australia is calling for key actions to drive suicide numbers down.

Mr Hunt said the government had funded several key initiatives in suicide prevention, including funding universal aftercare for people discharged after self-harm or a suicide attempt.

He said that in 2020 there was a 5.4 per cent reduction in suicides compared with 2019. However over the previous 10 years the suicide death rate had increased by 15.2 per cent.

Mr Berriman said telling his story would take a personal toll, but he believed it was critical to challenge the stigma surrounding mental health and suicide.

“The amount of people who have told me about personal experiences but are too ashamed or fearful to talk about it to anyone else is astounding,” he said.

“I thought: ‘Well if I am the chair of Mental Health Australia and I can’t be authentic and tell my story, how do I expect anyone else to be honest’?”

He celebrated his father’s 75th birthday a couple of months ago, is about to announce a venture capital fund and is back doing the things he loves.

“I have a lot of joy in my life, where back then I didn’t. I’m one of the lucky ones that got a second chance at it.

“What I’m trying to instil is that there is a better life on the other side if you get through it, so stay with us.”

The Morning Edition newsletter is our guide to the day’s most important and interesting stories, analysis and insights. Sign up here.

Most Viewed in Lifestyle