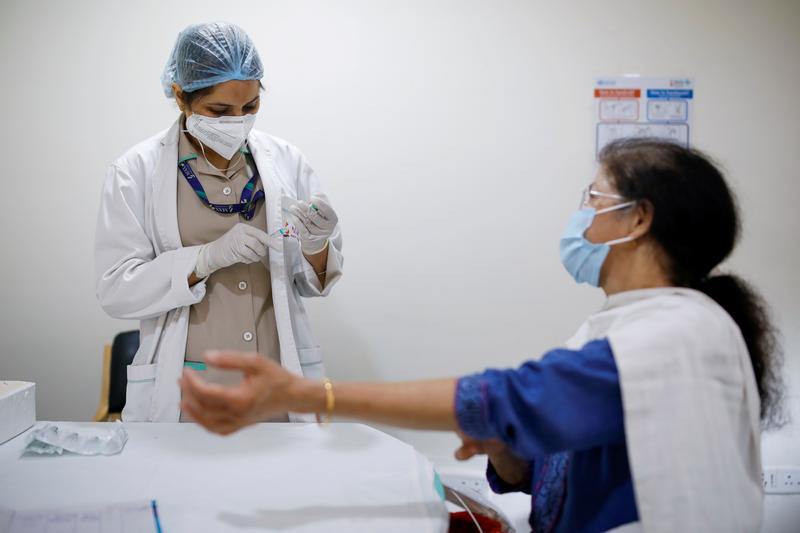 NEW DELHI (Reuters) -News that India will delay deliveries of AstraZeneca’s COVID-19 vaccine to the global programme to inoculating poor countries triggered alarm on Thursday, with the head of Africa’s disease control agency describing the continent as “helpless”.

UNICEF, a U.N. agency responsible for distributing vaccines through the global COVAX programme, confirmed to Reuters overnight that it expects deliveries of the vaccines to be delayed this month and next.

AstraZeneca doses produced under licence in India form the overwhelming bulk of vaccines that COVAX has been anticipating for the initial months of its rollout, which aims to vaccinate vulnerable people in the world’s poorest countries for free.

“We understand that deliveries of COVID-19 vaccines to lower-income economies participating in the COVAX Facility will likely face delays following a setback in securing export licenses for further doses of COVID-19 vaccines produced by the Serum Institute of India (SII), expected to be shipped in March and April,” UNICEF said in an email.

“COVAX is in talks with the Government of India with a view to ensuring deliveries as quickly as possible.”

India’s foreign ministry and the SII did not respond to requests for comment.

COVAX countries had also been told about lower-than-expected supplies of AstraZeneca doses from South Korea, another country that makes them under license, for March, UNICEF said.

“In line with the challenges of the current global supply environment, this is due to challenges the company faces in rapidly scaling up supply and optimising production processes for these early deliveries,” UNICEF said.

The director of the Africa Centres for Disease Control, a continent-wide disease-fighting body, told an online news conference on Thursday: “As a continent I truly feel helpless.”

“Without rapid access to vaccines we will continue to be challenged, lives will be lost, our economies will continue to struggle…” John Nkengasong said in response to questions about the COVAX delay, and about separate discussion of potential curbs on COVID-19 vaccine exports from the EU.

The COVAX programme was set up by the World Health Organization and Gavi, an alliance of countries, companies and charities that promote vaccination. Its aim is to provide 2 billion doses of COVID-19 vaccines by the end of this year, enough to vaccinate frontline healthcare workers and the most vulnerable people in poor countries around the world.

COVAX said in early March it aimed to deliver 237 million doses of AstraZeneca’s shot to 142 countries by the end of May.

Richard Mihigo, immunization programme coordinator for the World Health Organization in Africa, said on Thursday the WHO and Gavi were negotiating with India to try to resolve the delay.

“We hope that a quick solution will be found on the situation,” he said.

African countries are relying overwhelmingly on free doses expected from COVAX for vaccination programmes that in most cases are only just getting under way, months after rich countries began their rollouts.

As of Thursday, 28 African nations had received initial consignments of vaccines from COVAX, with the continent of 1.3 billion people having so far received around 16 million doses in total, according to the Africa CDC.