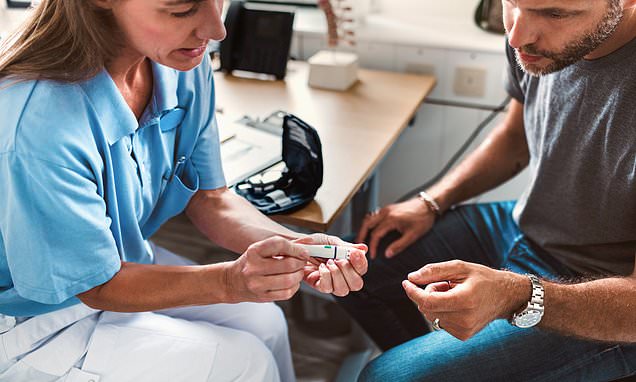 Having high blood sugar and cholesterol levels in your THIRTIES raise risk of dementia, experts say

Having high blood sugar in your thirties could raise your risk of Alzheimer’s later in life, a study suggests.

Those with the highest levels of ‘good’ cholesterol in their 30s and 40s were 15 per cent less likely to develop Alzheimer’s by the age of 70.

And high levels in middle-age were linked to even greater risk of suffering the cruel disease later in life.

Similar results were seen with higher resting blood sugar levels, but only for adults in their fifties.

Researchers said while other studies have linked dementia to cholesterol and blood sugar, the findings illustrate that ‘these associations extend much earlier in life than previously thought’. 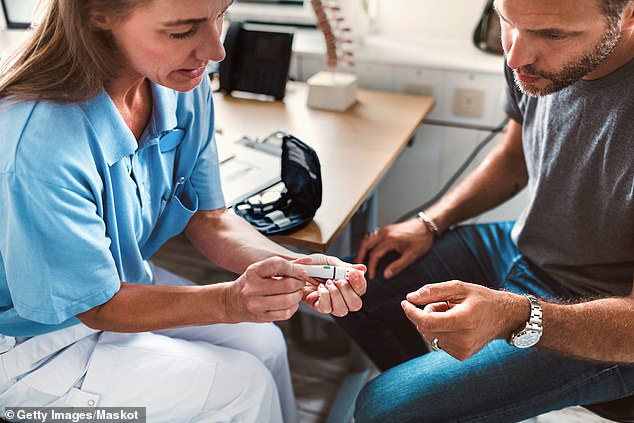 Those with the lowest levels of ‘good’ cholesterol in their 30s and 40s were 15 per cent more likely to develop Alzheimer’s by the age of 70. (Stock picture)

Alzheimer’s — the most common type of dementia — affects 850,000 people in the UK, charities say.

Around 5.8million suffer with the memory-robbing disorder in the US.

There is currently no way to cure Alzheimer’s. Drugs can only temporarily reduce the worst symptoms.

The disorder, which primarily affects elderly people, is thought to be caused by a build-up of abnormal plaque in the brain.

Dozens of studies over the past few decades have linked unhealthy arteries and poor heart health to the condition.

In the new research, published in the journal Alzheimer’s and Dementia, experts looked at health records of 4,932 people between 1979 and 2016.

They took measurements of blood sugar, cholesterol and fat levels as well as blood pressure readings once every four years.

The results were compared to dementia diagnosis rates among the same participants.

For people aged 35 to 50, a 15mg/dl increase in HDL — which experts say can keep blood-sugar levels in check — lowered the risk of Alzheimer’s by the age of 70 by 15 per cent.

For those aged 51 to 60, a 15mg/dl increase in good cholesterol was linked to a 18 per cent decreased risk of dementia later in life.

Doctors say a healthy HDL level is above 60mg/dl. Anything below 40mg/dl is considered low.

Among people in their 50s, a 15mg/dl increase in blood sugar was linked to a 14.5 per cent increased risk of dementia.

A blood sugar level less than 140mg/dL is considered normal, with anything above 200mg/dl considered diabetic.

Previous research has shown having too much sugar in the blood can over time damage organs, including the brain.

Dr Farrer added: ‘Our findings confirm other studies that linked cholesterol and glucose levels measured in blood with future risk of Alzheimer’s disease.

‘We have shown for the first time that these associations extend much earlier in life than previously thought.’

OBESITY: ADULTS WITH A BMI OVER 30 ARE SEEN AS OBESE

Obesity is defined as an adult having a BMI of 30 or over.

A healthy person’s BMI – calculated by dividing weight in kg by height in metres, and the answer by the height again – is between 18.5 and 24.9.

Among children, obesity is defined as being in the 95th percentile.

Percentiles compare youngsters to others their same age.

For example, if a three-month-old is in the 40th percentile for weight, that means that 40 per cent of three-month-olds weigh the same or less than that baby.

The condition costs the NHS around £6.1billion, out of its approximate £124.7 billion budget, every year.

This is due to obesity increasing a person’s risk of a number of life-threatening conditions.

Such conditions include type 2 diabetes, which can cause kidney disease, blindness and even limb amputations.

Research suggests that at least one in six hospital beds in the UK are taken up by a diabetes patient.

Obesity also raises the risk of heart disease, which kills 315,000 people every year in the UK – making it the number one cause of death.

Carrying dangerous amounts of weight has also been linked to 12 different cancers.

This includes breast, which affects one in eight women at some point in their lives.

Among children, research suggests that 70 per cent of obese youngsters have high blood pressure or raised cholesterol, which puts them at risk of heart disease.

And if children are overweight, their obesity in adulthood is often more severe.

As many as one in five children start school in the UK being overweight or obese, which rises to one in three by the time they turn 10.