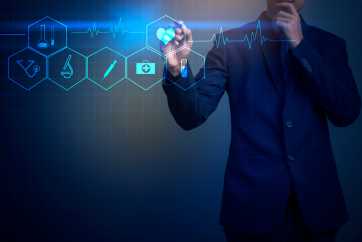 With the latest population survey in the context of the eHealth Barometer 2019, new insights into the acceptance and dissemination of digital health services in the Swiss society were gathered.

Since 2009, the eHealth Barometer has regularly polled Swiss residents, as well as representative health professionals from seven areas, on the state of digitalisation in healthcare, and provides insight into personal attitudes, current usage and needs in the electronic health record, eHealth and digital healthcare services in general.

More than 1,800 health professionals, including doctors, pharmacists, caregivers and others, as well as 1200 Swiss citizens were questioned by telephone.

Looking at the survey results, there is a positive picture with regards to the acceptance of eHealth services.

Two-thirds of the Swiss residents polled agree with the electronic storage of their personal health data, especially the emergency data, and about 70 percent agree with the exchange of data.

At 78 percent, the acceptance of the electronic health record among Swiss citizens is generally high, and only around one third of Swiss people seem to continue to reject the digital storage of their patient data.

Nonetheless, the national survey shows that the potential of eHealth, particularly in the communication channels, can be further exploited.

Currently only about one in four Swiss residents is in contact with their health care providers by email, and messenger services are in use at nine percent.

Telephone consultations are still preferred to online communications, with 71 percent, while video appointments and chatbots remain of marginal use, with only two percent.

However, the availability of digital services is important for the Swiss: for more than two-thirds, it is vital that patients are able to make appointments online, and nearly a third of Swiss citizens would be interested in using online consultations as an alternative to a doctor’s visit.

The most sought-after eHealth services in Switzerland

Smartphone apps for fitness and exercise as well as emergency apps are among the best-known eHealth offerings to almost two-thirds of the Swiss population.

Other eHealth services, such as digital vaccination cards and organ donor cards, as well as apps to remember drug revenues and early detection of allergies and diseases, are still relatively unknown.

Notoriety versus degree of utilisation

Although many online services are already well-known and most Swiss people would welcome them, the corresponding services are actually not yet being used consistently: fitness apps are at the top of the list with 41 percent usage, followed by emergency apps with 34 percent.

Just 11 percent of Swiss people currently use the electronic health record. Applications such as medication reminder, digital patient decrees, vaccination certificates and organ donation cards are only used by just under one fifth of the Swiss. Overall, however, the trend indicates an increase in the utilisation rate of the individual eHealth services, as older patients are increasingly interested in innovative services.

Overall, the recent eHealth Barometer showed that the electronic health record in Switzerland is increasingly gaining in popularity and most privacy concerns have been addressed. The willingness of patients to digitally store their own health data has generally increased – in both the digital natives and those aged over 65.

In addition, the willingness to pay for digital health services was examined in the 2019 eHealth Barometer, but only one third of the Swiss population would consider paying for access to the electronic health record.

Anna Engberg is a Wiesbaden-based freelance journalist specialising in health and technology.