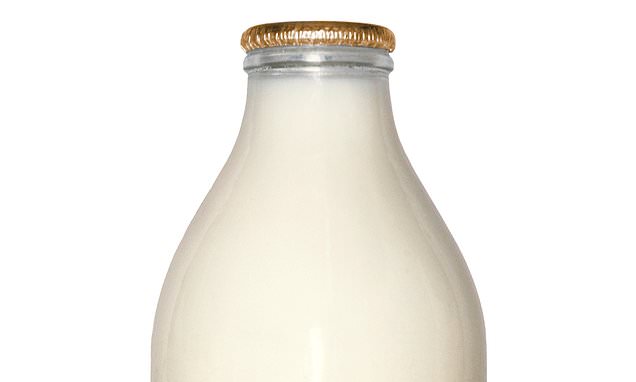 DR MICHAEL MOSLEY: Why full fat milk is the best thing you drink… and the reason the skinny stuff makes you fat 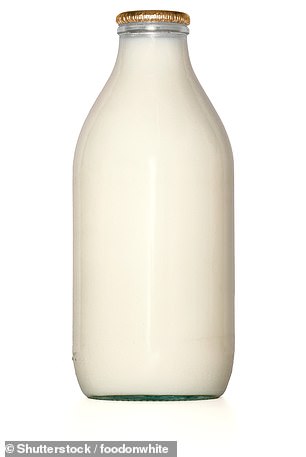 Britons are drinking a third less milk than they were 30 years ago, and consumption rates continue to fall

When I was a child almost everyone drank full-fat fat milk. Then, in the 1970s, we were warned saturated fats found in dairy would block our arteries and make us fat.

Concerned about our health, many made the switch to foul-tasting skimmed milk, or gave up cow’s milk altogether. Me included.

As a result, Britons are drinking a third less milk than they were 30 years ago, and consumption rates continue to fall. A recent survey found a third of people under 35 are now considering cutting back on dairy, citing health or moral reasons. Instead, they opt for plant-based alternatives such as soya, almond or coconut ‘milk’.

My 18-year-old daughter Kate is one of them. Cow’s milk makes her uncomfortable and bloated, so in a bid to reduce her symptoms, she made the switch to almond milk.

Kate’s problem is surprisingly common. About 60 per cent of the global population lack the enzyme lactase that helps us digest the sugars in cow’s milk, called lactose. For these people, guzzling milk can lead to unpleasant symptoms such as stomach irritation, gas and bloating. However, the vast majority have minor symptoms and even those with severe lactose intolerance can usually tolerate a tiny splash in their tea.

But for some people, even the odd builder’s tea can cause crippling stomach cramps, not to mention embarrassing wind. So I understand why the alternative milk market is booming. But I also have concerns.

If you are thinking of switching away from dairy, for health reasons, then there are a few things to know, because unless you really understand what it is you are doing, switching from dairy could actually be bad for your bones, heart and brain. And, rather ironically, opting for skinny versions could even make you fatter. After weighing up the evidence, I’ve recently switched to the full-fat variety again – and after reading this you may want to do the same.

Cow’s milk contains lots of essential nutrients that nut or oat milks don’t; high levels of protein and Vitamin B12, for instance.

Everyone knows dairy is an excellent, natural source of calcium, essential for healthy bones, but not many are aware of another, equally important nutrient, called iodine. One small glass of cow’s milk (full-fat, semi-skimmed or skimmed) contains almost 70 per cent of our recommended daily intake of iodine – essential for brain development in babies and regulating mood and metabolism in adults.

Studies have shown ‘milk’ derived from plants contains just two per cent of the amount found in cow’s milk. You can also get your iodine ‘fix’ from eating seaweed and it’s abundant in shellfish and other white fish. But cow’s milk remains by far the main source of iodine in the average British diet. 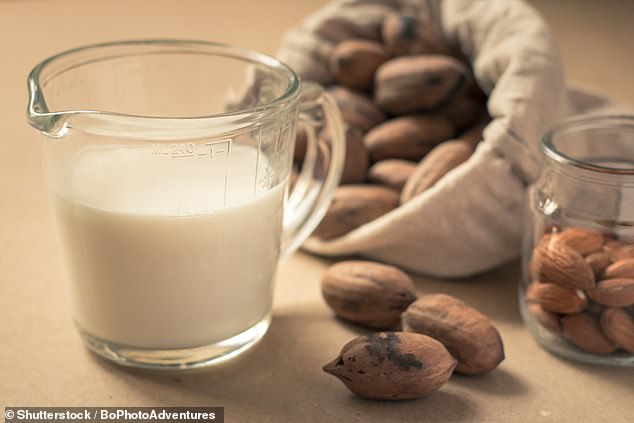 One small glass of cow’s milk contains 70 per cent of our recommended daily intake of iodine, whereas plant based ‘milk’ contains only two per cent of the vital ingredient

Given the fact that we are one of the most iodine-deficient countries in the world, many of us need every scrap we can get.

Sadly, young women tend to have the lowest levels – and this is the same demographic most likely to shun animal foods in favour of plant-based alternatives. A 2011 study of British teenage girls found nearly 70 per cent had iodine levels well below the acceptable minimum. Iodine is needed to make thyroxine, a hormone released by the thyroid g land that controls how effective your body is at converting food into energy, also known as metabolic rate.

Persistently low levels of iodine lead to depletion of this hormone and the slowing down of vital bodily functions, including burning energy. It is what is known as a ‘hypothyroid’ state, which leads to weight gain and mood swings. More worryingly, iodine deficiency in a pregnant woman can impact the brain of her foetus – a 20-year study of 14,000 pregnant and post-pregnant women discovered that if an expectant mother was mild to moderately iodine-deficient, this had a significant effect on her child’s reading ability and IQ scores.

Another study, looking at almost 50,000 babies, found both maternal and new-born iodine intake to have a significant impact on the child’s neuro-development at three years of age. Low levels of the mineral were associated with delayed language development, behavioural problems and reduced motor skills in children. This happens because a lack of thyroid hormones dramatically halts the brain development of the foetus.

The extra fat can curb your hunger pangs

I witched from full-fat milk to skimmed in the 1980s, amid fears that saturated fat could impact my heart health and my waistline. The trouble was, I found skimmed milk (which is about 0.3 per cent fat) so watery I couldn’t stomach it, so chose semi-skimmed (1.6 per cent fat) instead. This green-top milk remained my go-to for many years until last year. I returned to blue-top after reading a number of recent studies which showed the sorts of saturated fat you find in milk and dairy seems to be protective rather than harmful.

One of the reasons we’ve been told to go for low-fat options, like skimmed milk, is because consuming saturated fats raises level in the blood of LDL, often thought of as ‘bad cholesterol’. High levels of LDL are associated with a greater chance of heart disease.

It was also assumed that because skimmed milk has less than two-thirds of the amount of calories, per glass, of full-fat milk, it would be less fattening.

But we now know it is more complicated than that.

The saturated fat in milk does indeed boost LDL but it also boosts levels of ‘good cholesterol’ known as HDL, and this appears to balance out the damage done by higher LDL.

HDL picks up excess cholesterol in the blood and takes it back to your liver, where it’s broken down and removed from the body.

To many people’s great surprise (including me), there have been a large number of recent studies demonstrating that full-fat milk drinkers not only tend to be slimmer than those on lower-fat varieties, but also have a lower risk of metabolic syndrome – or raised blood pressure, elevated blood sugars and raised levels of fats in the blood that can increase your risk of heart disease.

A recent study of 1,600 healthy middle-aged Swedish men found those who ate butter and drank full-fat milk were half as likely, over the 11-year study period, to become obese than those who went for skimmed milk and low-fat spreads.

And a study of 18,438 American women found those eating the highest amount of full-fat dairy were the least likely to gain a lot of weight over 11 years.

The likely explanation, according to studies, is that consuming high-fat dairy products keeps you fuller for longer, reducing the lure of sugary snacks.

So why not just go one step up to semi-skimmed? Well, you certainly could but it has lower levels of some essential fatty acids, like omega-3, which is linked to slowing cognitive decline and reducing anxiety and depression.

Full-fat milk may have three times the fat content but it also contains 90 times the amount of omega-3 fats as found in skimmed milk, and about twice as much as semi-skimmed, not to mention that the fat-removal process rids the finished product of a host of vitamins, such as Vitamin A and Vitamin D. Some of these vitamins are added back in afterwards, but by no means all.

I like the flavour of full-fat milk and those extra few grams of fat curb my hunger pangs.

I believe my brain, bones, heart – and taste buds – will thank me for it.

I am a coeliac and must avoid all gluten – which makes shopping for your recipes challenging. I’m desperate to lose a stone before my summer holiday. Can coeliacs do your diet too?

Those with coeliac disease can do the 5:2 diet – although it may be trickier when buying ingredients.

Unfortunately, many are expensive and include lots of added sugar. Read the labels very carefully and opt for low-sugar versions if possible.

Most packaged foods highlight ingredients that may cause intolerances.