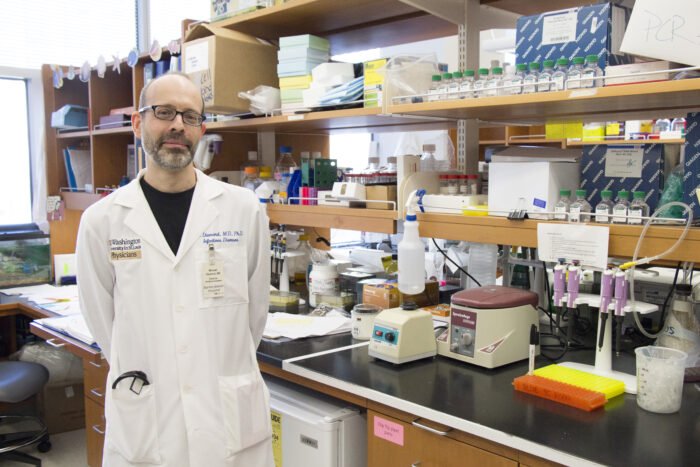 Michael S. Diamond, MD, PhD, an infectious diseases specialist at Washington University School of Medicine in St. Louis, has been chosen as the recipient of the American Society for Clinical Investigation’s 2019 Stanley J. Korsmeyer Award. He is being honored for his contributions to understanding the molecular basis of disease caused by globally emerging RNA viruses such as the Zika, West Nile and chikungunya viruses.

Diamond, the Herbert S. Gasser Professor of Medicine, is noted for leading groundbreaking studies into Zika, including why and how it causes devastating neurological damage to the developing fetus. Further, Diamond has been at the forefront of research into West Nile virus, which began causing brain infections in the United States in the early 2000s. He identified the immune cells and molecules involved in controlling West Nile infection.

The award is named after Stanley J. Korsmeyer, MD, an internationally known cancer researcher and beloved former Washington University medical oncologist whose groundbreaking discoveries opened new doors to understanding and treating cancer. At age 54, Korsmeyer died of lung cancer, though he had never smoked. Today, he remains one of the most widely cited researchers in the world.

Diamond’s research has focused on a subset of RNA viruses known as flaviviruses — which include Zika, West Nile and dengue — and alphaviruses, which include chikungunya. His laboratory has identified many of the key immune system components that define host protection against these virus types and the viral genes that work against this response.

Diamond — also a professor of molecular microbiology, and of pathology and immunology — joined the School of Medicine faculty in 2001. He is an associate director of the university’s Andrew M. and Jane M. Bursky Center for Human Immunology and Immunotherapy Programs, and is an active mentor to several doctoral students and postdocs.

Over the years, he has received numerous honors and awards. Most recently, he was elected to the National Academy of Medicine and named an American Association for the Advancement of Science fellow.