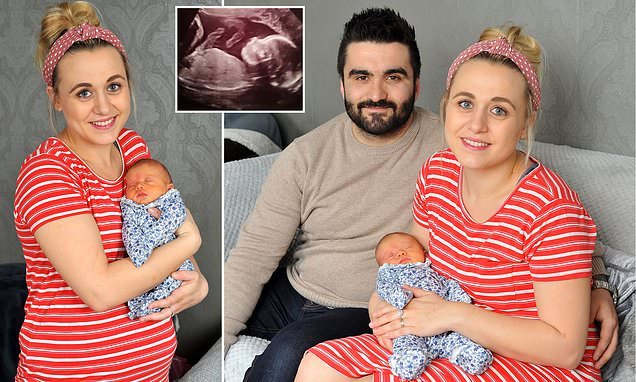 Back home with her mother, the healthy baby girl who had a pioneering spine operation INSIDE the womb to treat condition that threatened a lifetime of disability

It is a moment she feared would never happen. Beaming with motherly pride, Bethan Simpson holds her healthy daughter just weeks after the unborn baby had groundbreaking surgery in the womb to treat spina bifida.

She was discharged from hospital last week with baby Elouise who is now kicking and gurgling – showing no signs of the condition that could have left her with lifelong disabilities.

Despite enduring 20 hospital visits, Mrs Simpson, 26, and her husband Kieron, 28, are so in love with their baby that they are determined to have more children.

Looking adoringly at 14-day-old Elouise, Mrs Simpson, a nurse, said: ‘Her legs kick, her toes curl. Bless her, she doesn’t even know the impact she has had. It’s a miracle, that’s the only way I can describe it. We may have been through a lot, but I’d do it for Elouise all over again in a heartbeat.’ 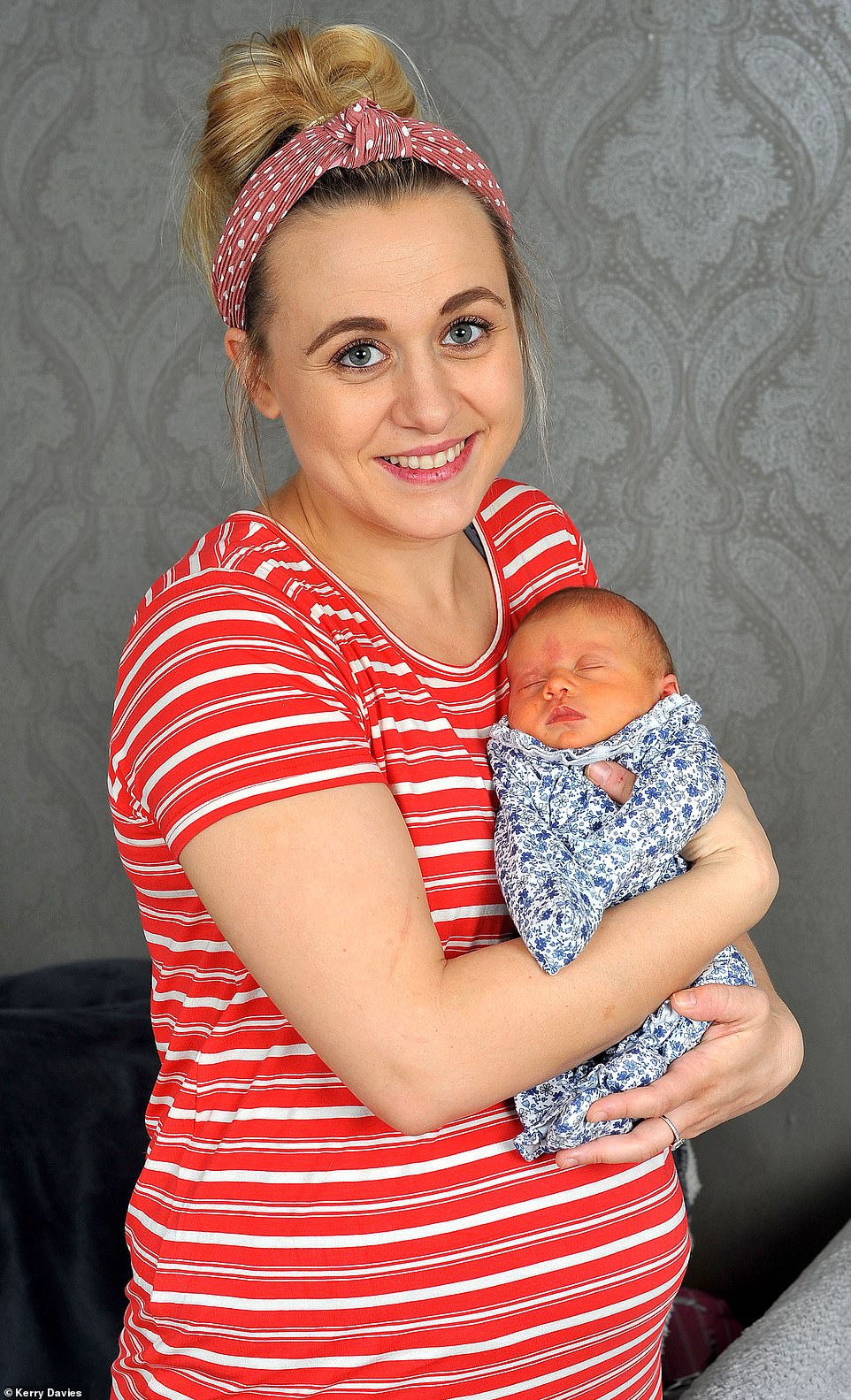 Elated: Bethan Simpson (pictured) was discharged from hospital last week with baby Elouise who is now kicking and gurgling

The Simpsons began IVF treatment in 2018 after three years trying for a baby. It worked on the second attempt and, overjoyed, they began planning for the new arrival. But a midwife at St Peter’s Hospital in Maldon, Essex, spotted an abnormality during the 20-week scan and said the baby might have spina bifida because the head was not the right size.

‘I was hysterical as soon as she said something was wrong,’ Mrs Simpson said. ‘I could see it in her face and then she said, “I’m sorry guys, I’m finding something that’s not right”.’

The unborn baby was diagnosed with myelomeningocele spina bifida at Broomfield Hospital in Chelmsford later that day. This occurs when the spine and spinal cord do not develop normally. Instead, the spinal canal remains open along several vertebrae. It leads to nerve damage that can cause paralysis in the legs, loss of bowel or bladder control, and in some cases brain damage. In the UK, about one in 1,000 babies have the condition.

The Simpsons, from Burnham-on-Crouch in Essex, were given the option to terminate the pregnancy that day. Mrs Simpson said: ‘They did say it would be a pretty bleak outcome… very bleak. It was such a raw time.’

Her husband, an engineer, said: ‘It was a pretty stark choice. How could we bring a child into this world with such a poor quality of life? She may not have had the use of her lower limbs as well as dysfunctional bladder and kidneys.’ 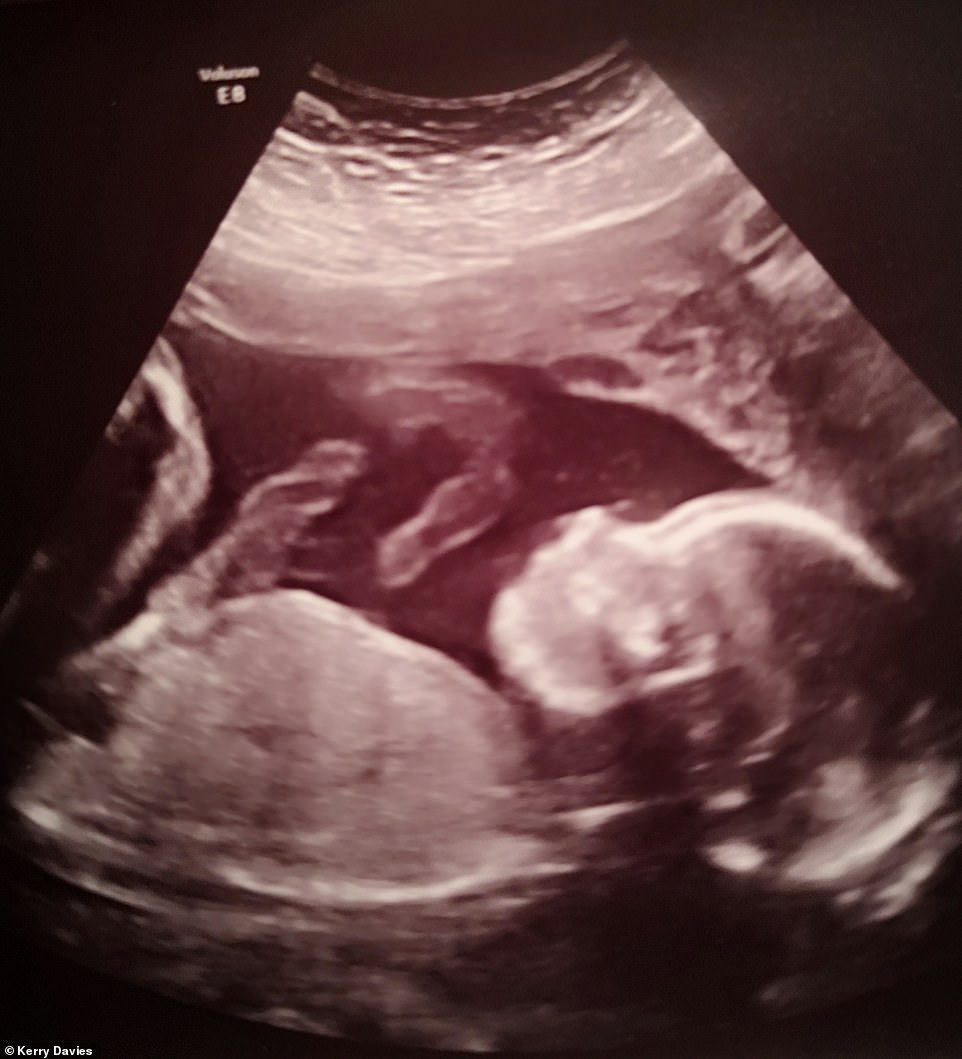 The unborn baby was diagnosed with myelomeningocele spina bifida at Broomfield Hospital in Chelmsford (pictured: Eloise in the womb) 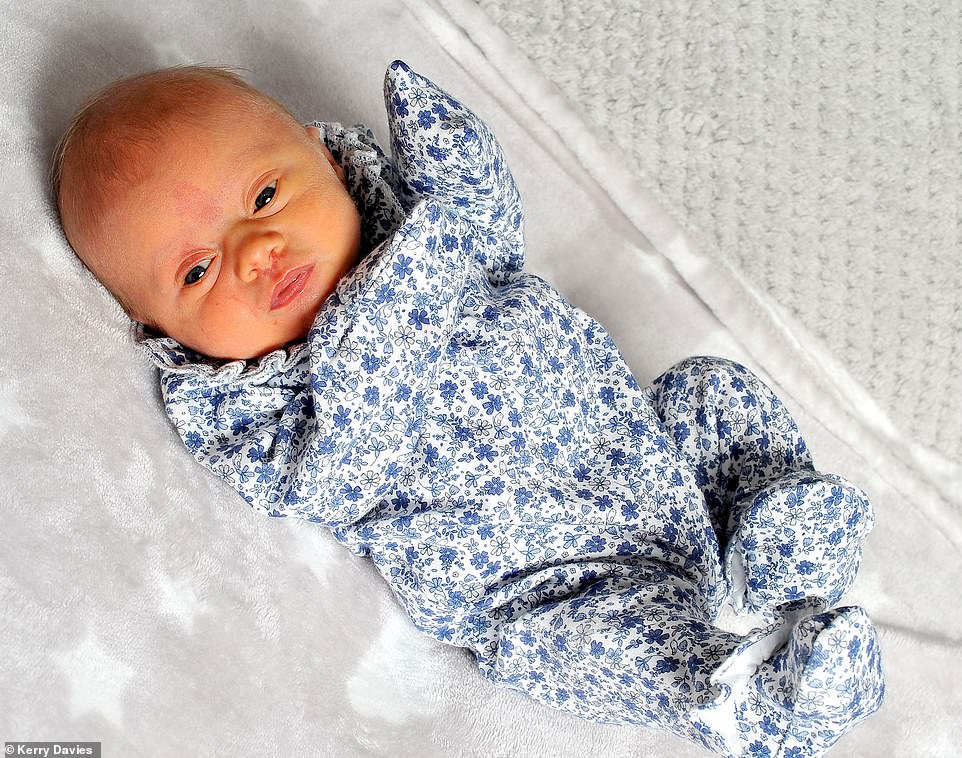 It is possible that Elouise could suffer some effects of the spina bifida, but if she does, they are expected to be minimal

Two days later they visited a specialist at University College Hospital in London who told them about possibility of groundbreaking surgery.

‘There was a bit of hope in that darkness,’ Mrs Simpson said.

She and Elouise passed a strict set of criteria to be eligible for surgery and the operation took place in January, 25 weeks into her pregnancy.

Over five hours a team of 20 medics cut open her womb to reach Elouise’s spinal cord to help protect it from damage during pregnancy.

Mr Simpson said: ‘It didn’t sink in that we were going to have a healthy baby until she arrived. Just because she was kicking in the womb didn’t mean it would happen outside.’

She gave birth on April 1 and was told the baby was healthy.

‘I was so elated,’ she said. ‘We were crying happy tears for about ten minutes. After the birth Elouise went through a series of tests. Each time she passed one it was momentous.’

Mother and baby were discharged after a week. It is possible that Elouise could suffer some effects of the spina bifida, but if she does, they are expected to be minimal.

Some 80 per cent of parents whose unborn babies receive a diagnosis of spina bifida choose to have a termination.

But Mrs Simpson’s determination has encouraged women around the world to seek alternative options.

‘I received a message from a woman in Italy saying I had given her hope for her own child’s diagnosis and that she was no longer going to terminate it,’ she said.

The procedure, which was paid for by charitable funding, is due to become available on the NHS later this year. Mrs Simpson is the fourth British woman to undergo the procedure.