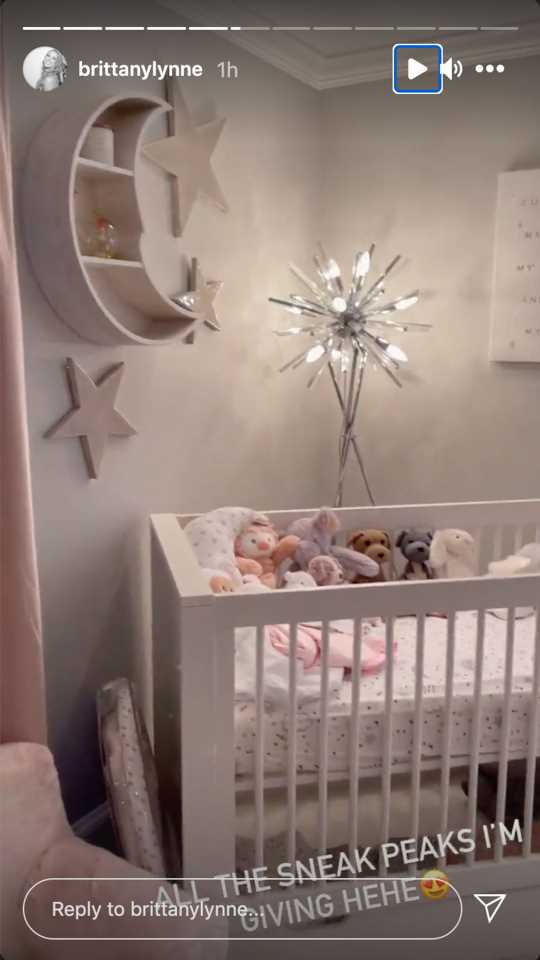 Brittany Matthews is in nesting mode!

The mom-to-be, 25, showed off her nearly-done nursery for her baby girl, her first child whom she is expecting with fiancé Patrick Mahomes. In footage documented on her Instagram Story, Matthews gives a 360-degree view of the baby's room, highlighting the stuffed animal–filled crib and the new wallpaper.

"The previous wallpaper was not working or sticking to the walls," she explains while pointing the camera to the accent wall, adorned with a pink-and-white design.

The nursery also has pink curtains and starry-night wall installations, plus a sign that reads "You are my sun, my moon, and all my stars."

While quickly panning the camera around the walls, Matthews is careful not to show one portion of the room where she teases that her daughter's name is incorporated into a design. "Her name is back up but ya can't see it!" she says in the video, over which she wrote, "All the sneak peeks I'm giving here 😍." "Now we're just cleaning and organizing," she says later in the video, showing boxes waiting to be unpacked and other elements to assemble. "A mess. It's a mess."

Matthews — who previously gave a tour of her work-in-progress nursery back in November — joked that her new addition's room is a favorite of her dogs.

"It's their favorite room, they love it in here," she says while laughing at how the pets cuddled up with her in the nursery. Last month, Matthews shared what she has learned while carrying her daughter. Matthews has previously kept her Instagram followers updated about continuing to work out while pregnant, so she offered tips and advice she's picked up along the way.

"One of the most important things I have taken from pregnancy is, GIVE YOURSELF SOME GRACE!!!" she wrote, sharing a series of videos in which she demonstrates leg and shoulder routines. "Understand your body is changing, you're growing a whole human inside of you, so do not be so hard on yourself!"

"The amount of times I workout in a week fluctuates every week, and sometimes I don't get a workout in at all, and that's okay!" she said. Matthews added that her top three "priorities" are to "just move, drink your water [and] eat appropriate amount of cals."