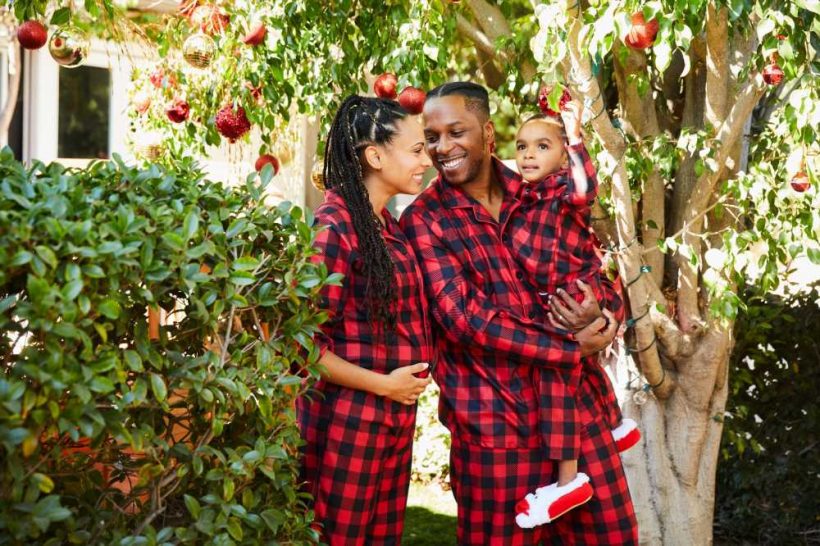 The holiday season just got a little more exciting for Leslie Odom Jr. and his wife, Nicolette Robinson!

With the holidays fast approaching, Odom and Robinson are prepping for the festivities and for their new baby on the way — at the same time.

On Monday, the Broadway pair announced they're expecting their second child together, a baby boy. Now, the two (who are already parents to 3½-year-old Lucille "Lucy" Ruby) are sharing more details on the joyous news and how their daughter is adjusting to the idea of becoming a big sister.

"She's so protective of Mama. She speaks to Mama's tummy and says, 'Good morning, little baby.' It's great to see," Odom, 39, tells PEOPLE. "It's a very useful thing as a parent; when she's not being the most mature version of herself, we remind her that there's a baby coming and she's got to be a big sister … she's got to show him the way."

"She's starting to wrap her head around the concept of pregnancy. Now one of her main questions, when we are talking about other people, is, 'What tummy did they come from? Whose tummy did they come from?' And I was explaining to her about her aunts and uncles, what tummies they were born in," Robinson, 32, says with a laugh. "She's very interested in that."

And amid the new normal of the COVID-19 pandemic, with the family quarantining at home, the father says he often sees that his daughter is "a little lonely" and missing her school friends, explaining that he's excited for Lucy to have "another little person around."

"It's been a longing for some more company with little people. She's got plenty of adults around giving, but she is really excited to have another little person around," Odom says.

How Hamilton Star Leslie Odom Jr. and His Family Celebrated the Movie's Release

A new baby is just one of the exciting things turning a tumultuous 2020 around. The Hamilton original cast member and his wife are working to spread cheer a little this year, getting a jump start on holiday festivities.

"It's a few weeks earlier this year — usually it happens around Thanksgiving — but I was happy to welcome it a little early. The decorations go up and one thing that we do right at the top of the holiday season to really let us know it's turning over is we make some hot apple cider; we did last week," Odom says. "It's a three-hour process but it's very, very worth it. I've perfected the recipe over the last few years. Every batch that I make just gets a little bit better."

The Waitress star also goes on to share with PEOPLE how being pregnant during the holiday season has enhanced her nesting routine.

"The nesting mode for me has been really starting to get more intense," she says. "For me, I think after the year that we've all had and on top of this year's challenges, I'm in the nesting mode with pregnancy — and I've already started decorating the house for Christmas. I just feel like it's time. It's time for the holiday cheer to begin." And to further kick off the holiday season, the soon-to-be family of four has teamed up with children apparel store Carter's to help spread happiness to families across the country. Carter's Wonderful Weeks of Giveaways, which launched on Wednesday, is a festive countdown to the holidays featuring ways for families to win special holiday giveaways and experiences, including a virtual pajama party and book reading with Odom and Robinson.

"When Carter's told us about their Wonderful Weeks of Giveaways, it just felt really in line with what the holidays mean to us. For me, the holidays are about family, love and joy. And I think, [now] more than ever, we all deserve to find that joy during this time," Robinson explains.

"Obviously we can't gather in the way that we usually do [over] the holidays, so it's just finding different ways to be creative this year. We're having a little party over Zoom hosted by Carter's, which is exciting," she adds.

Odom says that he also saw the good of the campaign, adding that it lined up with the same ideals of his new holiday album, This Christmas.

"The holiday album, much like this partnership with Carter's, was really imagining [what] people might be most in need of this particular holiday season," Odom says. "When Carter's wanted to offer this very special opportunity to fans of the brand and people who happen to be fans of Nicolette and me, we jumped at it. A chance to host a little party for families where we welcome and invite them into our homes and invite them into a family tradition of ours." In addition to the Carter's campaign, the holiday-loving parents have one other thing to look forward to this season: their new movie, One Night in Miami. The film, which marks Regina King's directorial debut, features Odom and Robinson taking on the roles of Sam and Barbara Cooke, respectively, as the story follows the one-night meeting of Muhammad Ali, Malcolm X and Jim Brown amid the civil rights movement.

"More than ever, we are focused on creating work that is meaningful to us, that is speaking to authenticity in what you're feeling and putting your time into things that really feel worth it," Robinson says of starring in the film, which opens on Christmas Day.

"Exactly. Things that'll stand the test of time," Odom adds. "Whether it's holiday albums or movies or whatever — especially in this phase of our lives, having these kids, we're trying to do things that make not only ourselves proud but one day hopefully make them proud of what Mommy and Daddy did."

And like the spirit of Christmas, the parents are also teaching their daughter how to share the gift of kindness, especially amid a heightened time of polarization in the country.

"We really make it about decency and kindness and how we're on the side of people that are kind and decent," Odom says.