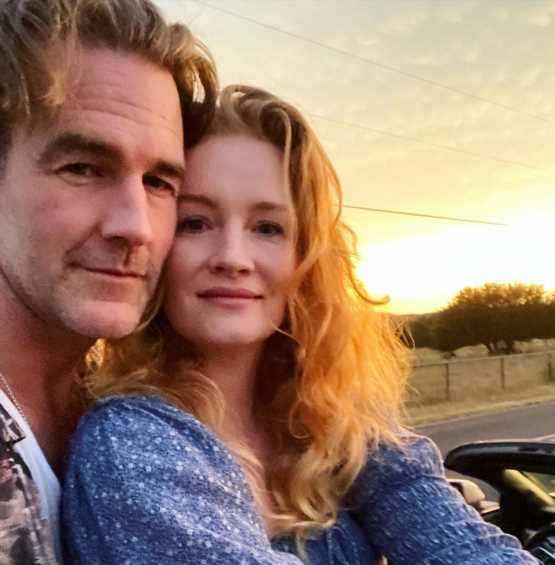 Kimberly Van Der Beek is reflecting on her five miscarriages, as well as the possibility of expanding her family in the future.

During a new installment of The Make Down podcast, the mom of five and wife of Dawson's Creek alum James Van Der Beek opened up about her past pregnancy losses, which she said were "really harsh experiences."

"I understand that I am very blessed to be able to birth five children. I've also had five miscarriages, two of which were really harsh experiences," said Kimberly, 38. "… It has changed my day-to-day quite a bit, because I'm in very much a healing mode right now."

In June, James, 43, revealed that his wife suffered a miscarriage at 17 weeks pregnant, the second within a seven-month span. Kimberly — who is mom to Gwendolyn, 2, Emilia, 4, Annabel Leah, 6, Joshua, 8, and Olivia, 9½ — said she is being kind to herself as she recovers from the recent losses.

"My body is really needing the nourishment and the care right now, and I've actually been more hands-off with parenting than I have in the past," she said.

Kimberly explained that she had miscarriages between her second and third babies, another between her third and fourth, again between fourth and fifth, and two after her youngest. She said the last two miscarriages were "really extreme."

"It was a really spiritual experience," she said of feeling near-death during pregnancy complications that led to a November 2019 miscarriage. "Now I'm really learning what it's like to have a relationship with my body and put myself first."

"… I'm really being tender with myself," she added, "and tender with coming back into my body and giving myself all the nourishment that I need."

Never miss a story — sign up for PEOPLE's free daily newsletter to stay up-to-date on the best of what PEOPLE has to offer, from juicy celebrity news to compelling human interest stories

James Van Der Beek and His Family Are Moving from Los Angeles to Texas: 'Onto the Next Big Adventure!'

Kimberly explained that societal pressures to quickly move on after having a baby or suffering a pregnancy loss is not conducive to the mother and her mental health.

"It's really interesting what we do to ourselves and to other women sometimes," she said of society's expectations. "What I've really learned is to let all of that go. So right now I wake up with the kids, but then I go back to sleep. I have a little extra help, I'm taking time."

When asked later in the interview if she's open to having more children in the future, Kimberly said the "possibility is there" since she has decided not to use birth control.

"Listen, the possibility is there, if my body agrees to it. I do not take birth control — big surprise! And, in fact, I will not take birth control. It really took me years to rebalance my system after birth control," the mom of five explained, adding, "You know, there are other ways to go about calculating dates and things to not get pregnant. We're not great at that."

"But I need to feel really good in my body if I'm going to explore that option," she continued. "And right now I'm not there."

31 Celebrities Who've Bravely Opened Up About Their Miscarriages, in the Hopes of Helping Others

James announced the heartbreaking loss in June, writing on Instagram that they were "overjoyed" to learn of the pregnancy after the "brutal" miscarriage in November. "… the soul we'd been excited to welcome into the world had lessons for our family that did not include joining us in a living physical body," he wrote at the time.

Speaking of the heartbreaking experience, Van Der Beek said that he felt "helpless" and recalled "rush[ing] [Kimberly] to the hospital by ambulance for another harrowing night of blood transfusions."

"And as I stood by, grateful for the good people who navigated the maze of regulations to save her life — but helpless to do much for the woman I loved other than massage her feet and try to keep her warm (with my #DWTS robe, ironically) — something kept running through my head, again and again, which I now feel compelled to share: We've got to take better care of each other," he added.