REVEALED: The 17-year-old vaper who was the first patient receive a double lung transplant after using e-cigarettes linked to 40 deaths and more than 2,000 illnesses in the US

A 17-year-old male has becoming the first vaping patient in the US to undergo a double lung transplant.

Doctors at Henry Ford Health System in Detroit said in a press conference on Tuesday that the unnamed teenager was first admitted to a local hospital on September 5 with what was thought to be pneumonia.

Within a week, he was intubated before being transferred to Children’s Hospital of Michigan, where he was placed on life support.

His medical team called Henry Ford Health and asked if he would be a candidate for a double lung transplant.

The teen was transferred on October 3, where scans showed that virtually all of his lung had turned into scar tissue and, according to doctors, he was just days away from death.

A team successfully completed the six-hour transplant on October 15, but his doctors say he has a long road to recovery.

It comes amid the slew of vaping-related lung illnesses that have sickened 2,051 Americans since March and have killed at least 40 in 24 states and the nation’s capitol. 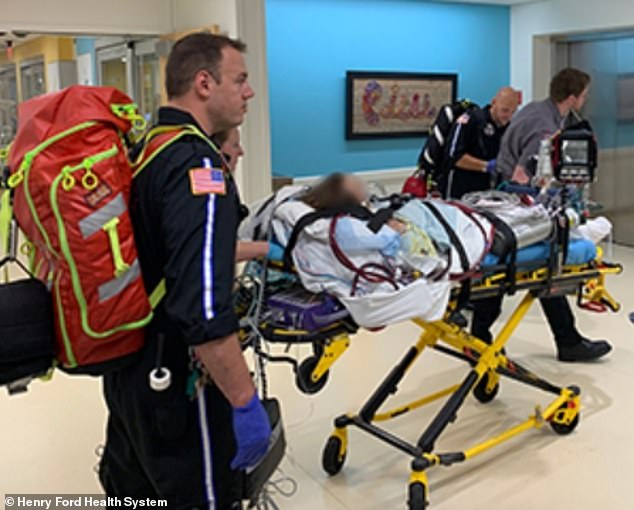 A 17-year-old male has been revealed to be the first US patient to undergo a double lung transplant in the due to vaping, which he did on October 15 at Henry Ford Health System in Detroit, Michigan. Pictured: The teenager arriving at Henry Ford on October 3 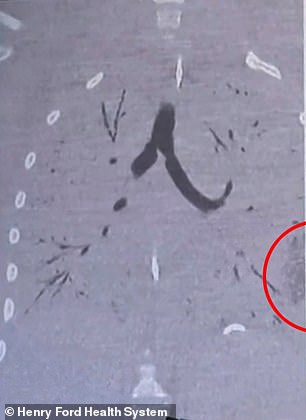 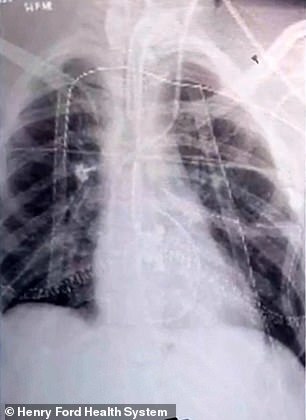 His lungs were so irreparably damaged with scarring and inflammation (grey, left) from vaping that he only was getting a tiny bit of air (circled, left) . The unnamed teen is now recovering with his new lungs (right)

‘We want to bring the case to public attention because of epidemic of e-cigarettes and vaping-induced injuries,’ said Dr Hassan Nemeh, the surgical director of thoracic organ transplant at Henry Ford Hospital, and one of the surgeons who performed the transplant.

‘It’s a senseless disease that’s totally preventable. Our teen patient would have face certain death without the transplant.’

On September 5, the teen – described as a then-perfectly healthy 16-year old athlete – was admitted to Ascension St John Hospital in Detroit with what doctors thought was pneumonia.

His ability to breathe quickly worsened and he was intubated on September 12.

He was transferred on September 17 to Children’s Hospital of Michigan, where he was hooked up to an ECMO (Extracorporeal membrane oxygenation) machine.

The doctors said the teen would have died within a few days had he not received the double lung transplant. Pictured, from left to right: Dr Hassan Nemeh, Dr Victor Coba, Mike Reed, Dr Nicholas Yeldo and Dr Lisa Allenspach 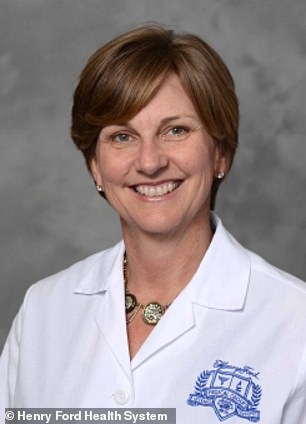 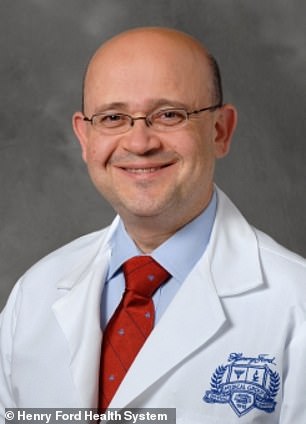 Dr Allenspach (left) received the call from Children’s Hospital of Michigan asking if the teen was a candidate for a double lung transplant. Dr Nemeh was one of the surgeons who performed the six-hour transplant on the teen

The machine pumps and oxygenates a patient’s blood outside the body, which allows the heart and lungs to rest.

Henry Ford received a call on October 1 asking if the teen was a candidate for a double lung transplant.

Two days later, the team traveled to Children’s Hospital with their own portable ECMO machine, switched the patient and had him transferred over.

Scans showed that the majority of his lung had turned to scar tissue and that he was getting very little air.

‘We evaluated that irreversible lung damage had occurred and, noticing lungs would not recover, we worked to get him on the lung transplant list, said Dr Victor Coba, a critical care medicine and emergency medicine specialist at Henry Ford.

Because of the severe damage to his lungs and the fact the he was ‘close to death’, the teen was put at the top of the transplant list.

On October 15, he received the lungs of an undisclosed healthy donor from the tri-state area (Michigan, Ohio and Indiana).

The transplant was successful and the teen is now very close to being transferred to rehab, but faces a long and intense road of recovery ahead.

‘But because he was on the ECMO machine for almost month with total sedation, he’s very weak so the next part is rehab to regain strength.’

In the slew of lung-related illnesses, most of the victims are male and under the age of 35, with the ages of those who died ranging from 17 to 75.

There have been three deaths each confirmed in California, Georgia, Illinois, Indiana, Massachusetts and Minnesota and two deaths each in Kansas, Oregon and Tennessee.

Last week, the Centers for Disease Control and Prevention (CDC) announced a breakthrough into the cause of a vaping illness outbreak, identifying a chemical compound as a ‘very strong culprit.’

Vitamin E acetate previously was found in liquid from electronic cigarettes and other vaping devices used by many who got sick and only recently has been used as a vaping fluid thickener.

According to the CDC, about 86 percent of people who’ve fallen ill reported vaping liquids containing THC, the main psychoactive component in marijuana.

By comparison, a mere 11 percent have reported exclusive use of nicotine-containing products.

Most of the illnesses have resulted from people vaping a combination of THC and nicotine, health officials say.

They add that teens and young people make up the majority of illnesses because flavored e-cigarettes were marketed towards them.

Massachusetts outdid them all when Governor Charlie Baker declared a public health emergency and enacted a ban all vaping products, flavored or non-flavored.

However, on Tuesday, a Superior Court judge ruled that the ban had to be lifted by next week for medical marijuana users