Christopher Richmond keeps a running tab on how many workers at the ManorCare skilled nursing facility he manages in western Pennsylvania have rolled up their sleeves for a covid-19 vaccine.

Although residents were eager for the shots this year, he’s counted only about 3 in 4 workers vaccinated at any one time. The excuses, among its staff of roughly 100, had a familiar ring: Because covid vaccines were authorized only for emergency use, some staffers worried about safety. Convenience mattered. In winter, shots were administered at work through a federal rollout. By spring, though, workers had to sign up online through a state program — a time-sucking task.

ManorCare urges every worker to be immunized against covid but turnover has vexed that effort. Managers at ProMedica, a nonprofit health system that operates ManorCare and senior care facilities in 26 states, faced a workforce conundrum familiar to all manner of providers during the pandemic: how to persuade essential workers to get vaccinated — and in a way that didn’t drive them away. Raises and bonuses, costing millions of dollars, did not move the needle to 100%.

Animus toward the vaccine created turmoil for some providers. Dr. Eric Berger, a pediatrician in Philadelphia who opened his practice more than a dozen years ago, enforced mandatory shots in May and saw six of his 47 staff members walk out. Berger said he worked for months to educate resistant workers. In April, he learned that several, women in their 20s and 30s, had attended a private karaoke party. Within days, four staffers were infected with covid.

Berger, who had seen in-office costs for protective equipment soar, then set a deadline for shots. He looks back with steely resolve over the last-minute “I quit” texts he received — and the hassle of finding a new receptionist and billing and medical assistants.

“Fortunately, we had some wonderful people who put in extra time,” he said. “It’s been stressful, but I think we did the right thing.”

Brittany Kissling, 33 and a mother of four, was one of the hesitant workers at Berger’s practice who decided — largely for financial reasons — to get vaccinated. The clinic manager couldn’t afford to lose her job. But she said she was nervous and that most of the workers who left recoiled at being told vaccinations were not negotiable. “I was a no-show my first time,” Kissling said about her first vaccine appointment. “I was scared. There were a lot of unknowns.”

But Kissling said Berger’s practice has spent “thousands and thousands and thousands of dollars” on masks and even paid workers for five days a week when they worked only two during the pandemic’s worst months. She said she understood how and why the karaoke episode prompted a mandate. “I get it from the business side,” said Kissling, about the requirement. “I do think it’s fair. I do think it is tough.”

Berger saw no other choice. “Vaccines are fundamental to our practices. That’s what we do,” he said. “Some got it in their heads that it could cause infertility; some had other reasons. It’s frustrating … [and] I don’t think it was political. If anything, most of these people are apolitical.”

At ManorCare, managers decided money could make a difference. Bonuses — up to $200 per employee — were added as an incentive, which in Pennsylvania alone cost ProMedica $3 million, said Luke Pile, vice president and general manager for ProMedica Senior Care skilled nursing centers.

Richmond, at ManorCare, said the resident council has been pivotal in keeping the focus on the risks of covid to the elderly — and no one there needs a reminder about the stress of the past year. According to Medicare records, the facility had 107 cases of covid among staffers and residents — and 14 deaths among residents beginning in March 2020.

Richmond and other administrators admit it can be a struggle to understand why some health workers are unmoved by the science.

“Everything has been so polarized this past year. I don’t know that there is a single reason that individuals don’t get the vaccine,” Pile said. “In trying to educate people, personally and professionally, we talk about the history and science. Unfortunately, individual opinions don’t always align with that.” 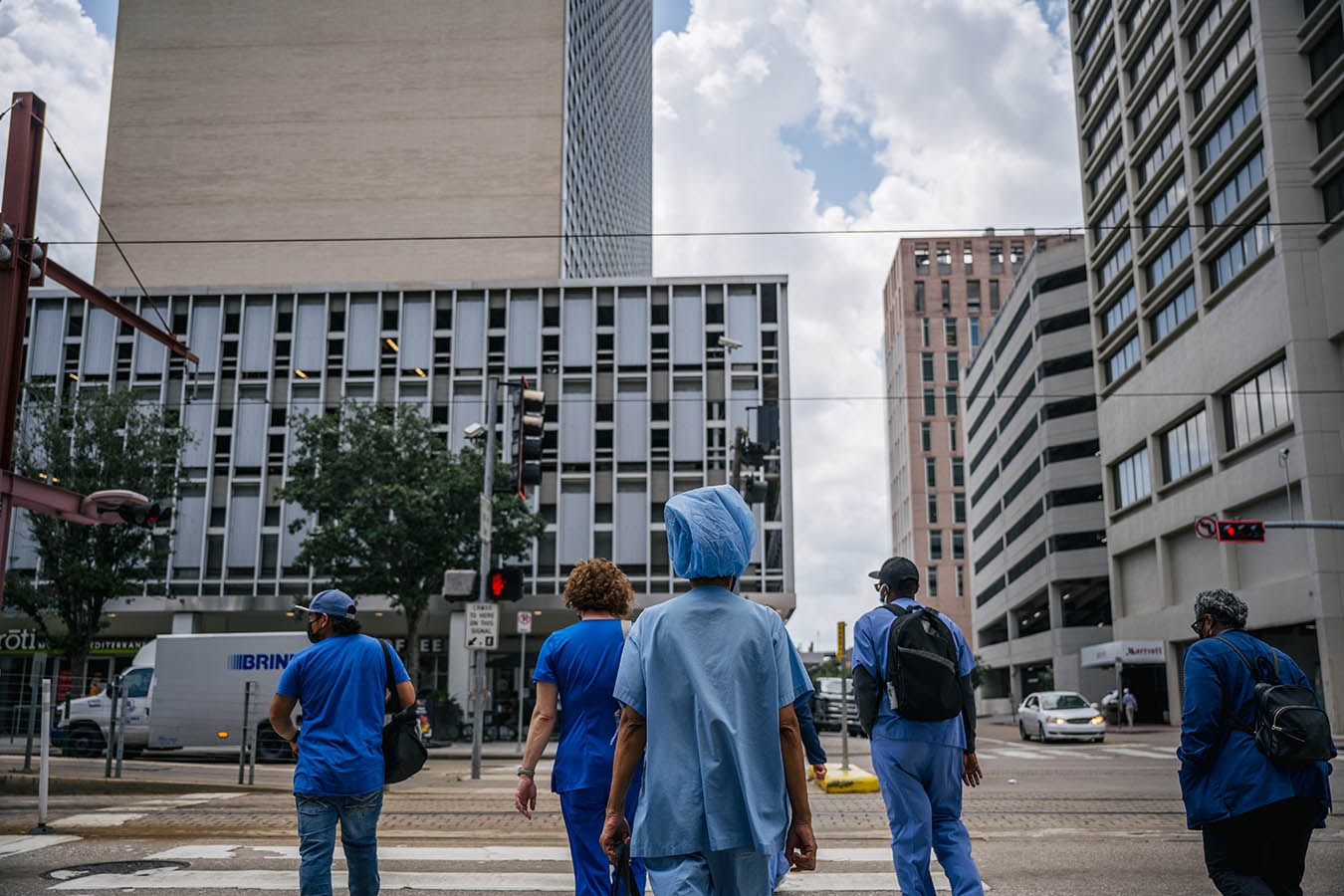 Mandating vaccines is a step that ProMedica has yet to take, even as more businesses, universities and health care providers do so. A few long-term care operators, such as Atria Senior Living, operating in the United and Canada, and Juniper Communities, announced mandates. Some have been met with lawsuits from workers aligned with conservative groups. In May, more than 100 staffers at Houston Methodist Hospital filed suit to dispute and derail the hospital system’s compulsory vaccination. A judge dismissed the challenge this month on the grounds that the hospital’s requirement did not violate state or federal law or public policy.

Last week, the U.S. Labor Department issued a temporary emergency standard for health care workers, saying they face “grave danger” in the workplace when “less than 100 percent of the workforce is fully vaccinated.”

In Pennsylvania, whose population ranks among the oldest according to 2019 census data, statistical snapshots published in April underscored the need for vigilance. Two state agencies overseeing skilled nursing care and personal care homes reported that only half of their workers were vaccinated. Covid was notably devastating to long-term care facilities nationwide in 2020; some of Pennsylvania’s deadliest outbreaks were reported by local media in places shown later to have low staff vaccination rates.

A survey by the Delphi Group, begun in March 2020 with over 700,000 Facebook respondents ages 18 to 64, recently was analyzed by researchers from Carnegie Mellon and the University of Pittsburgh, who found that health care workers were largely leading the vaccine uptake. But there were notable differences over the winter among people working, side by side, in health care settings.

Pharmacists, physicians and registered nurses were the least hesitant to get vaccinated. Home health care aides, EMTs and nursing assistants showed the highest hesitancy among front-line health workers. Overall hesitancy across professions decreased from January to March 2021, as much as 5 percentage points, as vaccinations expanded, according to the analysis by the university researchers.

University of Pittsburgh researcher Wendy King said people indicated they were receptive to the vaccine if they were familiar with its science. Educators, overall, displayed the least hesitancy; workers in construction, mining and oil/gas extraction showed the greatest. Half of those who were hesitant cited possible side effects — a fear that could be eased by education, King said. A third among the hesitant gave other reasons: They didn’t believe they needed the vaccine. They didn’t trust the government. Or they didn’t trust the covid-19 vaccines.

“We expected hesitancy to vary by group, but how much they varied was surprising,” King said. “These were not people who were anti-vaccine, but they were worried about the effect of the vaccine.”

Still, King said the percentage who didn’t trust the government was alarming. “If somebody doesn’t understand the vaccine, that’s one thing. If you don’t trust that government, that is a much more difficult issue to address.”

That may change as two prominent vaccine makers approach full approval by the Food and Drug Administration. Pfizer and BioNTech applied for approval in May; Moderna applied in early June. A recent KFF poll found nearly a third of unvaccinated adults said they would be more likely to get a vaccine once it was fully approved by the FDA.

At ProMedica, Pile described a multipronged approach in such states as Florida and Pennsylvania, home to large elderly populations. On-site counseling in groups, with familiar doctors and staff, helped persuade some who were reluctant, he said. Short videos on why and how the vaccine worked were readied. ProMedica senior medical staff flew to Florida to advise as the National Guard arrived at its facility in Pinellas County, the health system’s first to receive the vaccine.

Falon Blessing, a nurse, manages other practitioners at ManorCare Health Services Center throughout the Tampa region. She recounted how employees had wondered aloud how such newly created vaccines could be safe.

During three vaccinations sessions ended in January, though, the facility reached about the same rate as Pennsylvania overall — about 76% of its workers were vaccinated. That rate has fallen to 62% this month because of attrition. An education effort continues, a ProMedica spokesperson said.

“My takeaway was it mattered to have one-on-one discussions,” Pile said. “If you talk to 10 people, why they wouldn’t get the vaccine, you’d get 10 different reasons.”

“And there were political opinions — what they heard on Facebook — and then they’d say: I want to see how it goes,” he said.

The questions and qualms about vaccines came at the end of a deeply distressing pandemic year for health care workers, and facilities are now finding fewer applicants for essential care.

By spring, ProMedica had 1,500 job postings in Pennsylvania alone, compared with a typical 400 openings. Pile said ProMedica raised wages in dozens of locations, though he declined to provide wage ranges or rates. It spent $4.5 million in Pennsylvania from March through last week — and still supplemented its workforce across the U.S. by hiring through staffing agencies.

“I have less employees than ever before,” he said. “I have never seen anything like it.”

The Pennsylvania Health Care Association, an advocacy group, surveyed members in April to better understand vaccine reluctance. Zachary Shamberg, the group’s president, said it found that defining “hesitancy is not that simple.”

Shamberg said PHCA focused on why people had yet to be immunized and the characteristics of the workforce were telling: About 92% of all its workers are women; 65% are between ages 16 and 44. Among them, some worried early on about possible infertility from the new vaccine, he said, and some wanted to wait for the single-shot Johnson & Johnson vaccine. Others were sick with covid and were advised, once recovered, not to get a vaccine for 90 days.

Shamberg was also critical of the state data. Those surveys, taken in March and released in April, reflected a time when the vaccine was new to many people.

Pennsylvania, a battleground state in recent presidential elections, remains politically charged, and Shamberg noted that politics likely plays a role among holdouts. In recent months, PHCA enlisted churches and doctors’ consortiums to change minds. Keeping residents and workers safe should be a priority in a state that, in a few years, will face a “silver tsunami” of residents in their 80s, Shamberg said.

In recent weeks, there has been clear momentum among the general population for shots in Pennsylvania. The state now ranks among the top 10 states in the nation to administer first doses of vaccines, according to data from the Centers for Disease Control and Prevention.

“Pennsylvania is a big and diverse state,” Shamberg said. “And it’s interesting why some of our staff in western Pennsylvania were hesitant versus workers in the city of Philadelphia.”