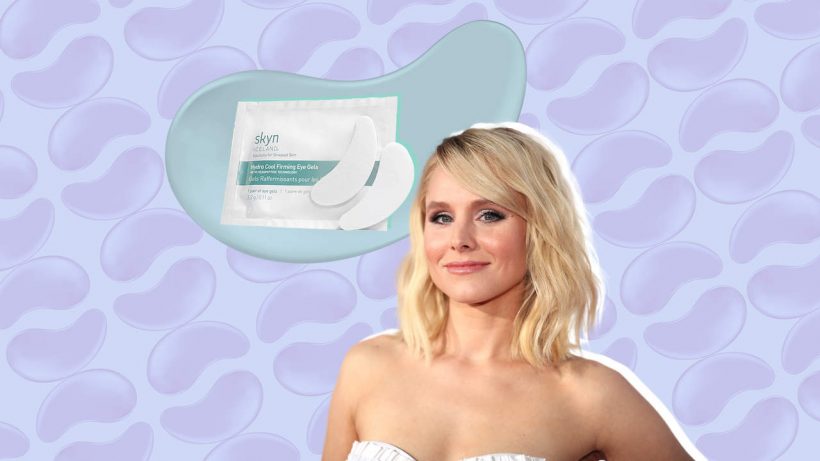 There’s nothing worse than waking up with puffy, tired eyes on the day of a big event (as if you weren’t already stressed enough!). Luckily, one of Hollywood’s most relatable (and most admired) celebrity couples has a hack for that. The Good Place star Kristen Bell posed with husband Dax Shepard for an Instagram photo sporting Skyn Iceland’s Hydro Cool Firming Eye Gels ($13, was $17; dermstore.com) on the way to a photo shoot this year.

In the caption, posted on her personal account in January, she wrote that they were “de-puffing” on the way to a photo shoot for “something really special, we've been working on for over a year.” We’ll take that as a sign that she trusts these undereye masks to work in high-pressure situations—and after looking at the ingredients, we can totally see why.

Your mom and dad are heading to a photo shoot for something really special we have been working on for over a year that we hope you LOVE. Dad is driving safely and we are de-puffing on the way! Xoxo

A great pick for anyone on-the-go, the 10-minute treatment is packed with powerful Ginkgo Biloba Leaf extract—which has anti-inflammatory properties—to reduce swelling on the thin skin of the undereye area. That means you can say bye-bye to puffy eyes for good—even if your night consisted of tears or minimal sleep.

But while the de-puffing properties make these perfect for event prep (just ask Amy Schumer), there’s more to these gel masks than meets the (under) eye. Hexapeptides (nicknamed “botox in a jar”), included in the anti-aging formula, can reduce the appearance of fine lines and wrinkles by calming the muscles under your skin.

But the high-tech science doesn’t end there. The vegan, all-natural eye masks also contain Coenzyme Q10 (CoQ10), which is an antioxidant naturally produced by our bodies. The enzyme, like other antioxidants, can even neutralize free radicals (which have been linked to aging).

Unlike many other patches that tend to be slimy and prone to slipping, reviewers say these undereye gels stay in place and don’t leave behind unwanted residue. The fabric exterior also means glasses-wearers can wear them underneath their glasses—so they can finally partake in the undereye mask trend without losing their 20/20 vision.

Celebrities aren’t the only ones raving about Skyn’s eye treatments. One five-star reviewer on Dermstore revealed: “I've always thought that I didn't have puffy undereyes until after I used these! After wearing for 10 minutes, my undereyes look incredibly smooth and even flatter! They do wonders for making you look more refreshed and awake.”

Whether you’re looking to prepare for a special event or simply want to add a weekly de-puffing eye treatment into your routine, these eye gels are the perfect addition. The best part?  They’re currently 25% off as part of Dermstore’s 20th Anniversary Sale, so not only can you score the four-pack for just $13, but the eight-pack of firming eye gels is also on sale for $24 (was $32). Just be sure to enter the promo code CELEBRATE at checkout, and act fast—the sale ends August 25.