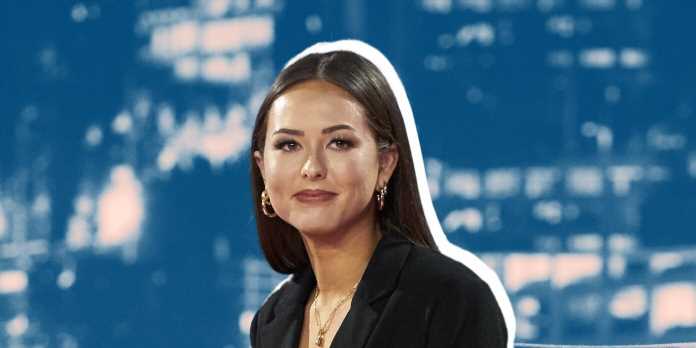 Last night during "The Women Tell All" episode of "The Bachelor," fan favorite Abigail Heringer talked about repesenting the hearing loss community, what it was like being the first deaf contestant, and how being deaf differs from being Deaf (with a capital D).

"I was really scared when I decided to come on just because I think people view the hearing community and then the Deaf community—with a capital 'D'—as black and white," Heringer said. "And I'm kind of that gray space in the middle that hasn't had a lot of light shown on."

She went on to explain that while she was born "profoundly deaf" and can't hear without her cochlear implant, she hasn't been accepted as part of the Deaf community because she communicates vocally rather than with sign language.

"I had no idea how people were going to receive me," the 25-year-old said of her time on the reality show. "The response has been incredible. I've had so many people reach out and say, 'Thank you for sharing your story, I have a very similar one.'"

When it comes to the difference between "deaf" and "Deaf" (or "little d" and "big D," as it's commonly referred to in the hearing loss community) that Heringer spoke of, it basically boils down to this: To be deaf, means to have the audiological condition of not hearing, while being Deaf refers to being part of a specific group of deaf people who who a language (American Sign Language, or ASL) and a culture, according to the National Association of the Deaf (NAD).

That being said, big D and small d are simply reference points—there's no right or wrong choice, and some people change their identity over time. Another term, "hard of hearing," is often used by people with a mild-to-moderate hearing loss, but it may also be used by a deaf person who doesn't have or want any cultural affiliation with the deaf community. As the NAD says, it comes down to choices, comfort level, mode of communication, and acceptance.

In addition to explaining that to the audience, Heringer also shared that fans told her how much they appreciated her showed hearing loss in a romantic light. "Because disability isn't always romanticized," she explained.

That meant also talking about the potential tough stuff that may have come up during the course of their relationship. During her time on the show, Heringer told "Bachelor" Matt James that if she was to have a family, there's a "really strong possibility" that her kids would be deaf. On the February 1 epsiode, Heringer opened up to real estate broker James, telling him, "I think there's just something about you, I'm super excited. I literally get the biggest smile on my face when I'm around you."

Then things got serious, with Herninger revealing, "But I'm also going to be as open with you, obviously, through this process. You want a wife and you want a family and you know I want those things too. But if I were to have a family, there's a really strong possibility that my kids would be deaf."

Though Heringer was eliminated on the February 15 episode of the 'Bachelor,' she shared in a recent Instagram post that she definitely didn't come away from the show empty-handed. "From the amazing friendships I made with such a strong group of women to my new sense of confidence with myself and my hearing loss, my heart is so full!" she wrote. "It was a pleasure to share my story and to raise awareness of the deaf & HoH community."