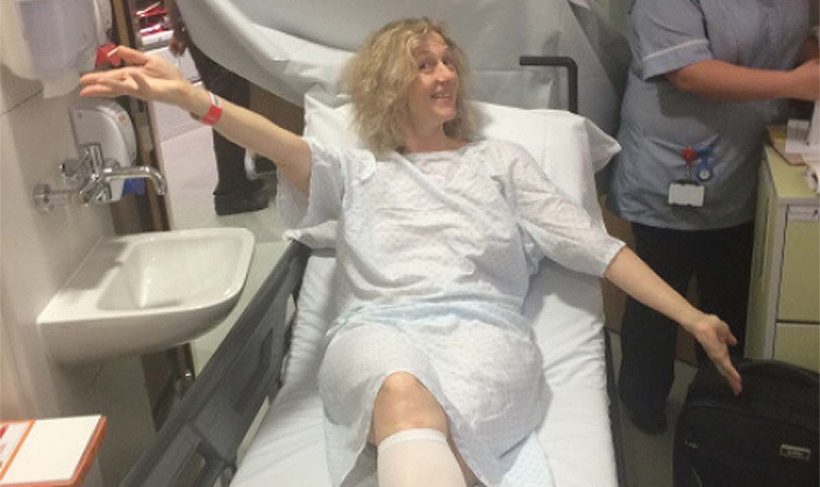 Short of a cure, the greatest weapon in the fight against cancer is early detection. Identifying the warning signs can help pick up the condition promptly, improving your prognosis. A former bowel cancer patient has shared the first symptoms that “made” her go to a GP.

The position of bowel cancer tumours means that symptoms often appear in your tummy or when you visit the loo.

While stomach problems like diarrhoea and tummy pain can also signal a variety of non-cancerous conditions such as food intolerances, Jackie Kaines Lang experienced symptoms in this area that turned out to be bowel cancer.

Jackie from Northumberland told Bowel Cancer UK: “My symptoms started with loose stools which I had consistently for many months.

“I also had two occurrences of rectal bleeds a year apart. I was tired (I now realise very tired) – but aren’t we all!

“Mainly, it was the fact that I had not done a solid poo for ages and ages that made me go to the GP.

“I had checked out bowel cancer on the NHS website a couple of times – so it was on my mind when thinking about symptoms.

“However, I had been reassured by the suggestion that in most cases my symptoms would not lead to a diagnosis of bowel cancer – also that most people with bowel cancer are older than me.”

Jackie was diagnosed with stage 3 bowel cancer in October 2015 when she was 53 years old.

Symptoms like loose stools and rectal bleeds are some of the tell-tale signs of bowel cancer.

The NHS explains that persistent blood in your poo that happens “for no obvious reason” or is linked to a change in bowel habits could be a red flag.

You might also experience an increased urge to go for a number two more, with your poo becoming runnier and looser.

Other warning signs of bowel cancer can include:

The NHS advises seeing a GP if you have any bowel cancer symptoms for three weeks or more.

Following a procedure in which a trained medical professional examines the lower colon and rectum using a narrow tube with a camera, Jackie had bowel resection in December 2015.

She said: “It was open abdominal surgery and recovery took some time. I wasn’t worried about my physical appearance, but it took a long time to get over the operation and rebuild strength particularly as I then went onto chemotherapy.”

The chemotherapy started in February 2016 and ended in August 2016. Jackie is now living “in the moment” and “actively” engages in things she enjoys.

“I do think that once you’ve had a disease such as bowel cancer it lives alongside you always in some shape or form.

“For me, the possibility of it coming back is always just there on the perimeter of my mind.

“As time passes, this has diminished – or perhaps I’ve become more adept at managing and balancing that anxiety.

“I turn 60 this year and, as a way of celebrating this personal landmark and my own good health, I’ve signed up to run the Edinburgh 10k. I’ve never run this far before and it feels daunting and exciting.”

You can support Jackie by visiting and donating to her JustGiving page.