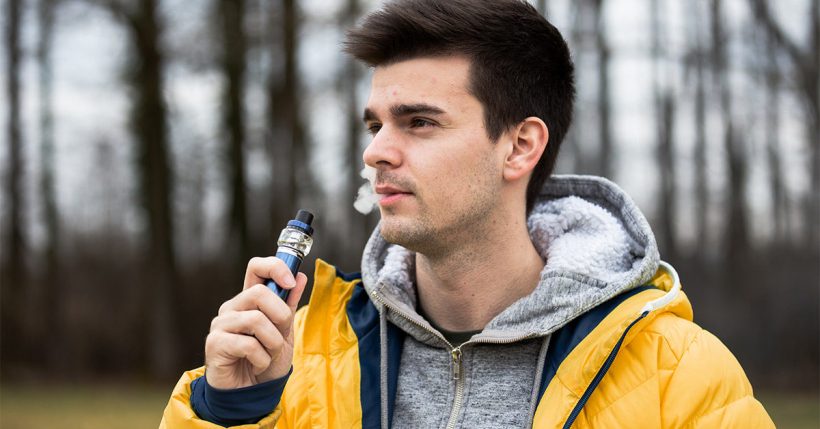 Vaping e-cigarettes could induce changes to the composition of the mouth’s microbiome, leading to increased risks of inflammation, gum disease, and infection.

That’s the conclusion of a study published today from the New York University College of Dentistry.

Researchers looked at a group of more than 100 cigarette smokers, e-cigarette users, and nonsmokers.

They found that smokers and e-cigarette users had significantly higher rates of gum disease and infection — 73 percent and 43 percent, respectively —than nonsmokers, who had a 28 percent rate of disease.

The researchers then used saliva samples from study participants to investigate what was driving these rates of disease and infection.

They found that smoking and e-cigarette use led to bacterial changes in the mouth, including increased levels of two different types of bacteria in e-cigarette users known to cause periodontal disease.

The oral microbiome and health

Just like in the gut, the composition of the microbiome in your mouth affects your propensity for infection and other diseases.

The bacterial changes among vapers indicate that “there will be a favorable environment for opportunistic pathogens to grow more in the mouth much faster, as compared to the good bacteria [normally there] and change the whole microenvironment, which may be which may further lead to other complications,” Deepak Saxena, PhD, MS, a study co-author and a professor of basic science and craniofacial biology at the NYU College of Dentistry, told Healthline.

Nadia Armentrout, DDS, a Virginia-based dentist and a fellow at the Academy of General Dentistry, agreed.

“The pathogens that are known to be the most aggressive are all anaerobic, which means they thrive in an oral environment without the presence of oxygen,” she told Healthline. “The dry oral environment and presence of nicotine, which reduces blood supply and oxygen levels, help create an environment that allows these bacteria to proliferate at an increased rate.”

Armentrout pointed to previous research indicating that mouth health is a leading indicator of other health complications.

“Essentially, vaping creates and promotes an environment that allows the impact of these bacteria to be exacerbated and further promote complications associated with poor periodontal health such as increased risk for cardiovascular disease, Alzheimer’s, dementia, stroke, heart attacks, respiratory infections that can lead to pneumonia, osteopenia, rheumatoid arthritis, uncontrolled diabetes, and even preterm or low birth weight babies as well as exposing the fetus to infections,” she said.

Better than cigarettes, but…

According to the new study, traditional cigarette smokers still had significantly higher levels of infection and inflammation than vapers, but nothing beats stopping smoking altogether for oral health.

While some people vape as a way to smoke less frequently or smoke “healthier,” that assumption of lower health risks has been thrown into contention as more studies into the health effects of vaping surface.

In addition, most of those studies pre-date the appearance of a mysterious vaping-related respiratory illness that emerged last year.

Part of this is simply because e-cigarettes have not been on the market long, so scientists don’t have a full understanding of all their effects, Saxena said.

“Because it’s a new product, we are seeing less changes right now, but the changes we are seeing are moving toward dangers of the combustible cigarette,” he added.

Research has shown how interconnected the mouth and the rest of the body are.

“The oral bacteria that cause gum disease have been found in the clots of both stroke and heart attack victims, showing they enter the bloodstream from diseased gum tissue and cause damage elsewhere in the body,” Ryan M. Jones, DDS, FAGD, a dentist in Nashville, Tennessee, told Healthline.

“Because it is so common, the infection and inflammation from untreated gum disease is one of the most studied connections between poor oral and overall health risks,” he said.

Experts say if you want to have a healthier oral microbiome and better overall health, there is a simple solution: Stop smoking, whether that’s vaping or cigarettes.

“The microbiome is reversible,” Saxena said. “So, if they stop now and the cells are not in stress and there is a good saliva production, the oral ecology will become normal again.”