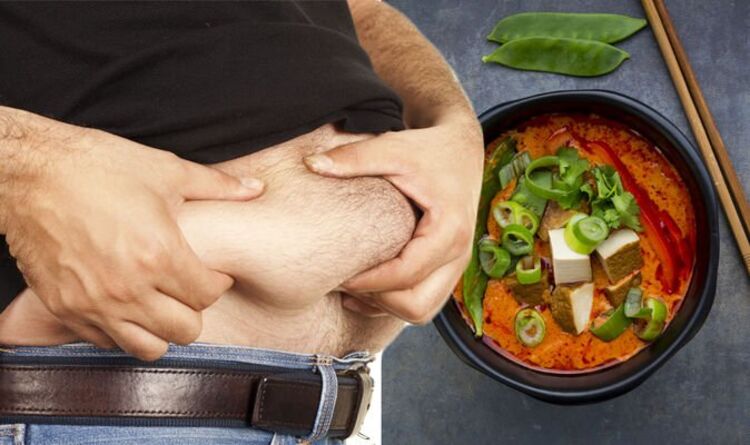 The main danger of visceral fat lies in the harmful chemicals it releases into the bloodstream, which has been linked to a higher risk of a heart attack. As with different types of weight loss, the most logical approach to reducing fat storage involves exercise and restricting food intake. Adding certain foods to one’s diet, however, may be equally beneficial for losing visceral fat. Some plant-based products, such as tofu, may help reduce cravings by a staggering 60 percent.

Those seeking to reduce abdominal fat are strongly advised to avoid products that encourage fat deposition.

Past studies have shown that a higher intake of protein reduces cravings by 60 percent.

It’s also been established that protein consumption can boost metabolism by 80-100 calories per day.

READ MORE: Visceral fat: The fruit you can eat every day shown to reduce the perilous belly fat

In one body of research published in the journal Obesity in 2011, researchers set out to determine the effects of dietary protein on perceived appetite during weight loss.

They experimented on a sample of 27 overweight and obese men.

The sample was split up into three groups, two of which consumed high-protein as three or six meals a day, while a third consumed three meals of a traditional intake.

The study determined that increasing protein intake to make up 25 percent of calories could reduce cravings by 60 percent.

The findings also revealed this could reduce the desire to snack at night in half.

But protein intake has also been found directly associated with a reduced abdominal circumference.

Research published in the journal Nutrition and Metabolism in 2012 confirmed this, stating that people who eat more protein had less abdominal fat.

The findings reinforce separate research published in the American Journal of Clinical Nutrition, which highlighted the prolonged effects of protein intake.

The authors of the 2006 paper established that protein intake was associated with a significantly reduced chance of abdominal fat gain in women over five years.

They also linked fruits and vegetables to reduced fat storage.

One finding consistent in most aforementioned bodies of research is that lowering effects of protein intake can be observed after consuming between 25 and 30 percent of calories from protein.

Plant protein can be found in sour, or nuts and seeds such as almond, pecans and sunflower seeds, states the health body.

But one protein source known to help reduce visceral fat is tofu, thanks to its high content of soy isoflavones.

The plant-based food, which comprises soy protein, is low in calories but high in protein and fat.

Other effective measures for reducing visceral fat include exercise, which can help reduce visceral fat even if signs of weight loss aren’t apparent.

Health bodies recommend undertaking at least 30 minutes of moderate-intensity activity most days, which can include brisk walks or bicycling.