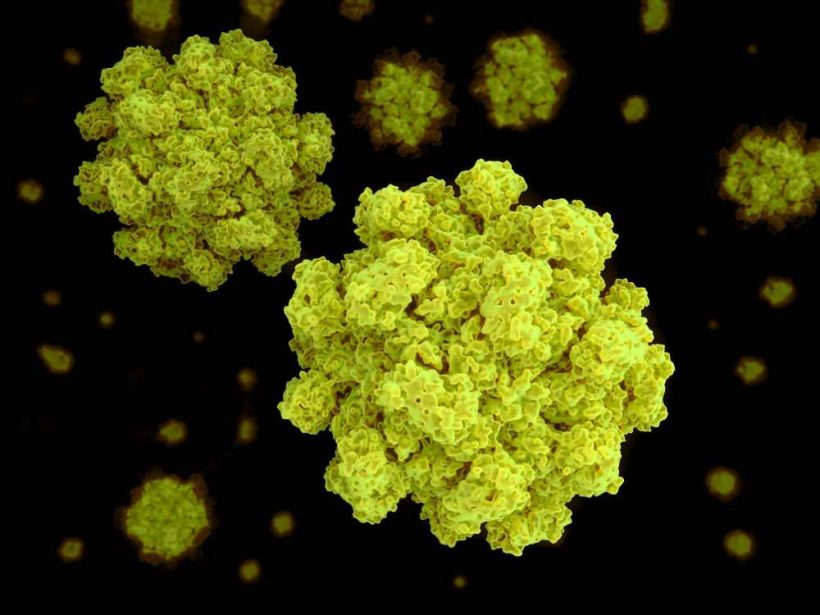 In a recent study posted to the bioRxiv* preprint server, researchers elucidated the underlying mechanisms of tripartite motif containing 7 (TRIM7) activity against coxsackievirus and norovirus.

TRIM7 is a protein that accelerates substrate ubiquitination and has antiviral properties; however, the mechanism of viral inhibition is not well-characterized i.e., whether TRIM7 directly binds to and degrades viral proteins or has indirect antiviral effects by activating immunological pathways is not known. 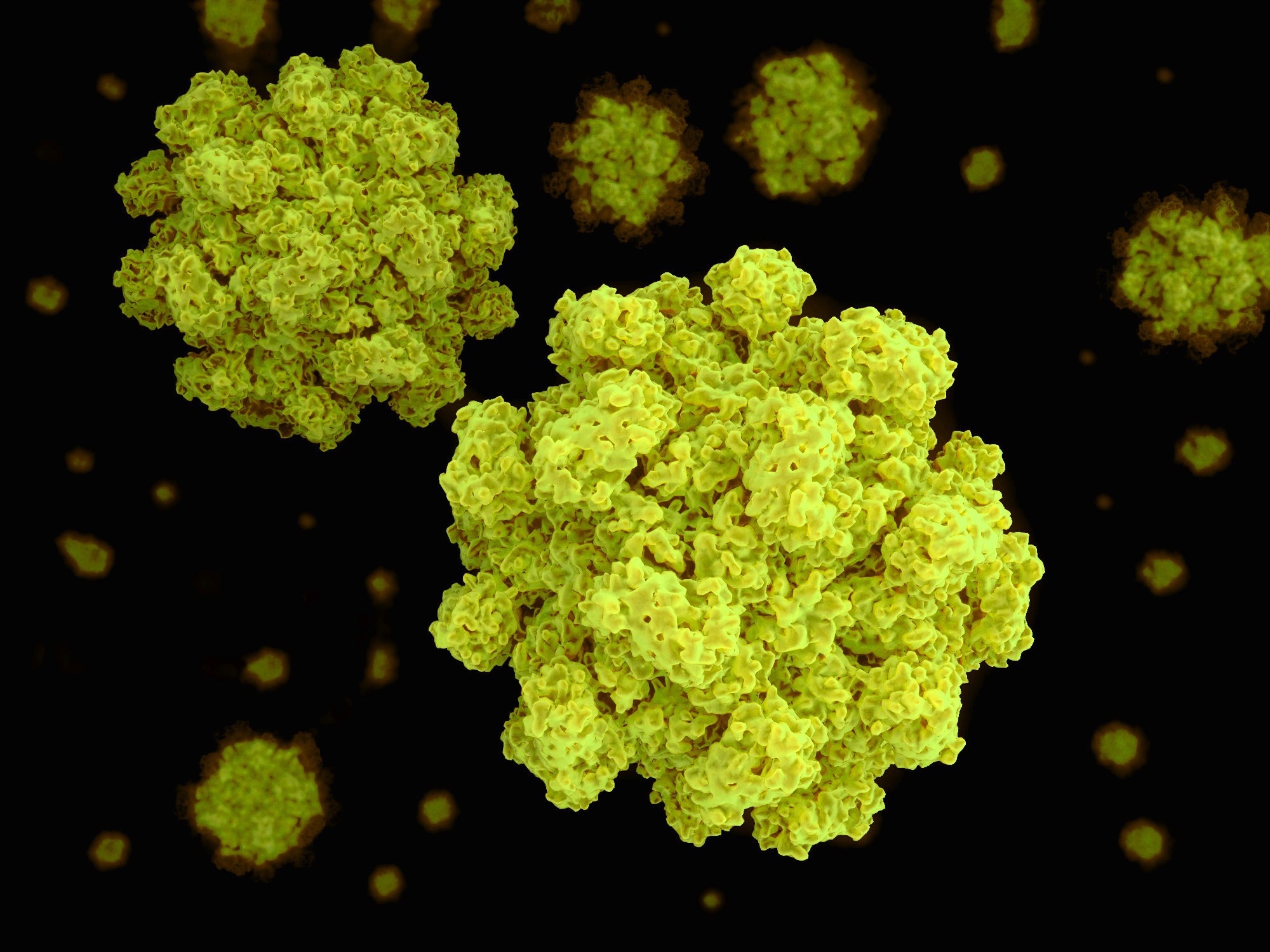 In the present study, researchers at the MRC Laboratory of Molecular Biology, University of Cambridge, and The Francis Crick Institute described the mechanisms used by TRIM7 to interact with multiple substrates and limit coxsackie and norovirus infections by degrading their proteins.

Isothermal titration calorimetry (ITC) binding experiments were performed using recombinant proteins to probe TRIM7-PRYSPRY interactions with rabbit glycogenin-1 (rbGYG1), a TRIM7 ligand. Peptides corresponding to glycogenin helices were synthesized. GYG epitope bound to TRIM7 was identified (GYG322-333 epitope), following which the team searched for an identical sequence in other ligands of TRIM7. To investigate if the C-terminal glutamine (Q) motif is recognized by TRIM7, which could explain unselective TRIM7 binding, peptides corresponding to the C-terminals of CVB3 2BC, RACO-1, calicivirus murine norovirus (MNV) nonstructural proteins (NS)3,6 were synthesized.

In addition, a peptide corresponding to human GYG1 (hGYG1) was synthesized for comparative assessments. The authors investigated if TRIM7 accommodates the R385 residue and differential scanning fluorimetry analyses were performed to assess TRIM7 interactions with 2BC peptides. To investigate if FQ and LQ peptide residues were adequate for binding, LQ was compared with ac-LLQ and ac-LQ, following which polyA peptide binding with LQ residues was evaluated.

Furthermore, several HA-TRIM7 constructs were overexpressed in 293T cells to assess the activeness of RING in cells and full-length proteins. The team investigated if TRIM7 binding to helix-FQ substrates would lead to cellular degradation, for which cells were co-transfected with plasmids encoding for EGFP-GYG1 constructs (Q333A and WT) and mCherry-Trim7 (mCh-T7) constructs (R385A and WT). Cellular proteins were quantified using immunoblotting and fluorescence microscopy.

To investigate if the antiviral effects were due to 3C protease (3Cpro)-mediated binding and degradation of viral proteins having the helix-FQ C-terminals or due to activated immunological signaling in TRIM7-overexpressed cells. Experiments were performed with increasing TRIM7 expressions with antiviral proteins such as TRIM5 and 21. HeLa cells expressing CD300lf (MNV1 receptor) and TRIM7 were used for infection analyses using WT MNV1 and CVB3-GFP. HeLa cells that restricted CVB3 and MNV1 were transduced with human angiotensin-converting enzyme 2 (hACE2) to investigate if TRIM7 could inhibit SARS-CoV-2 Omicron BA.1 activity.

3C-pro-mediated cleavage of proteins of positive-strand RNA viruses (Coronaviridae, Picornaviridae, and Caliciviridae families) led to the generation of C-terminal glutamines, which were substrates for TRIM7 activity. Therefore, TRIM7 could inhibit norovirus and coxsackievirus activities. Proteins such as RACO-1, CVB3 2BC, and GYG1 and the PRYSPRY domain were bound to TRIM7 since all of them contained C terminals terminating in helix-FQ degron motifs. CVB3 and MNV1 contained eight and two proteins, respectively, that ended in glutamine (Q) residues.

Therefore, the helix-FQ motif was a structural necessity to enable TRIM7-mediated inhibition of noroviruses and coxsackie viruses. In addition, TRIM7 would lose its viral inhibition activity if it is not bound to the glutamine motifs created by 3Cpro-mediated protein cleavage. However, TRIM7 could not restrict SARS-CoV-2.

Further, the inconsistent tissue expression and gene regulation of TRIM7 with TRIM5 and 21 indicated that TRIM7-mediated viral restriction could be considered an overexpression artifact. The CIV region of GYG was required for TRIM7-GYG binding. Mutants R385A, N383A, Q436A, and F426 abolished TRIM7-peptide binding; however, the T384A mutant showed binding with lesser affinity.

Bidentate salt bridges formed with the R385 residue by the peptides’ carboxylic acids were necessary for TRIM7 binding, and the interactions between glutamine side-chains and Q436 residues of TRIM7 were essential for positioning carboxy terminals for R385 binding. The T323A mutant did not alter binding, indicating that T323A could alter viral fitness irrespective of TRIM7.

TRIM7 could interact with proteins with terminal FQ or LQ residues. The ac-LQ and ac-LLQ residues were bound to TRIM7, whereas polyA did not demonstrate binding. In the ubiquitination experiments, TRIM5,7 and 21 showed similar behavior, indicating that K63-polyubiquitin could modify TRIM7. Puncta formation was observed in mCh-T7 and EGFP-GYG1, consistent with TRIM-formed cytoplasmic bodies. EGFP-GYG1 levels were three-fold times greater in the absence of TRIM7 binding. TRIM7 antiviral effects depended on the binding and degradation of viral proteins.

Overall, the study findings showed that TRIM7 targets C-terminal helix-FQ motifs to directly bind to and degrade viral proteins, and the viral inhibition was enabled by the detection of glutamine residues created by 3Cpro-mediated protein cleavage.

Dr. based clinical-radiological diagnosis and management of oral lesions and conditions and associated maxillofacial disorders.