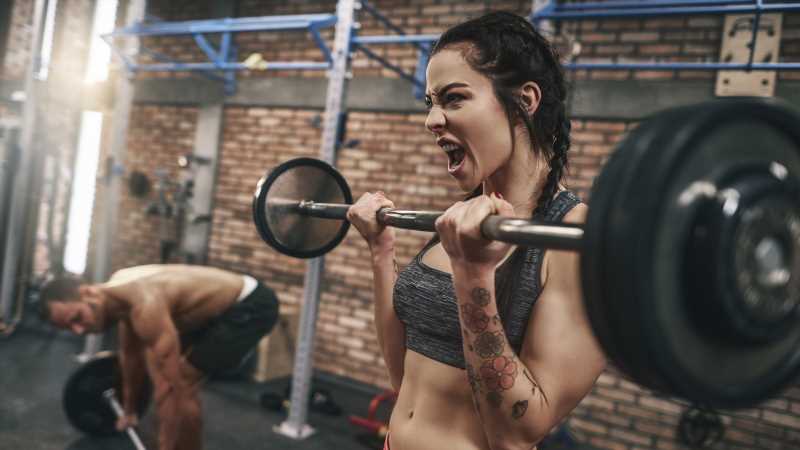 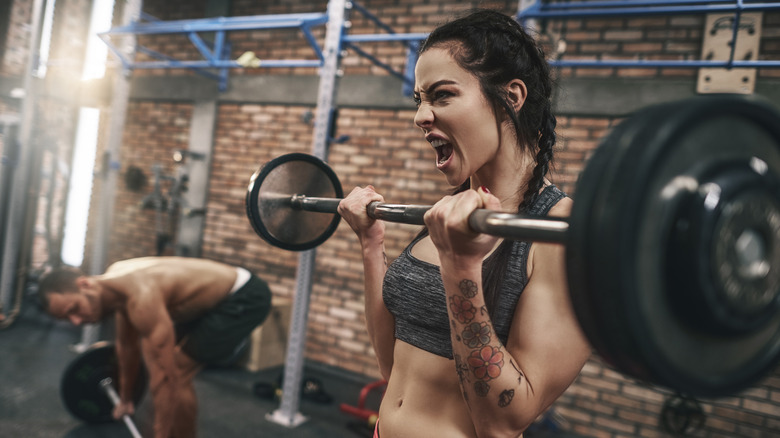 Instagram star Jen Selter, cover model Michelle Lewin, and Brazilian fitness model Eva Andressa have one thing in common: They lift heavy weights. That’s actually the reason why they look lean and fit year-round. Contrary to what you might have heard, women don’t get bulky from lifting weights. If building muscle was that easy, athletes wouldn’t spend countless hours in the gym and count their macros.

The American Heart Association recommends at least two strength-training sessions per week. Strength training isn’t limited to weight lifting, but you get the point: you need to build and preserve lean mass for optimum health. Muscle mass decreases by 3-8% per decade in sedentary adults, according to a 2012 review featured in Current Sports Medicine Reports.

As the researchers note, strength training can increase mass by three pounds and reduce fat mass by nearly four pounds in just 10 weeks. On top of that, it can boost your metabolism by a whopping 7% (per Current Sports Medicine Reports). Over time, such strength training may lower your risk of diabetes, heart disease, bone loss, and insulin resistance (via Everyday Health). But how does heavy lifting benefit women? Let’s find out! 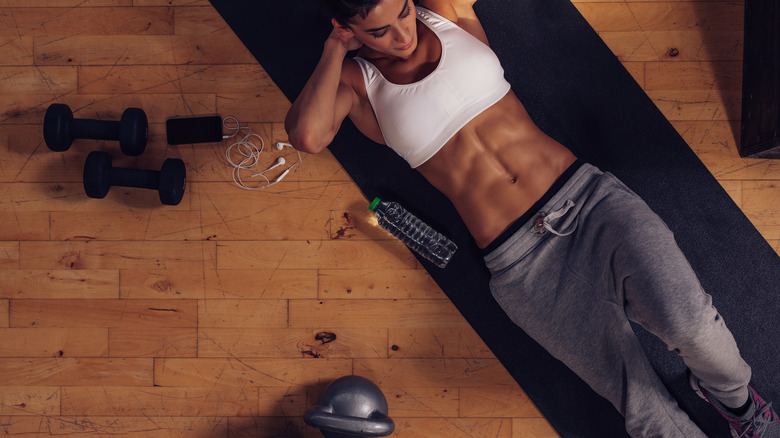 Weight training promotes hypertrophy, or muscle growth. Lean mass is more metabolically active than fat, meaning that it requires more energy to sustain itself. Most people burn about 4.5 to 7 calories per day for each pound of muscle, depending on their activity level and body weight. Researchers say that muscle tissue accounts for approximately 20% of total daily energy expenditure, according to the University of New Mexico. Fat mass, by comparison, accounts for just 5% of the calories burned throughout the day.

The more lean mass you have, the higher your metabolic rate. Individuals with a fast metabolism find it easier to maintain a healthy weight. As exercise physiologist Neal Pire told Everyday Health, “[Strength training] keeps your metabolism active after exercising, much longer than after an aerobic workout.”

For example, a cohort study conducted on 10,500 men found that weight training was more effective than cardiovascular exercise at preventing abdominal obesity in the long run (via Obesity). These findings apply to women, too. In another study, young women who lifted weights for one hour and 40 minutes experienced a 4.2% increase in resting metabolic rate for 16 hours after exercise (per the International Journal of Sport Nutrition and Exercise Metabolism). 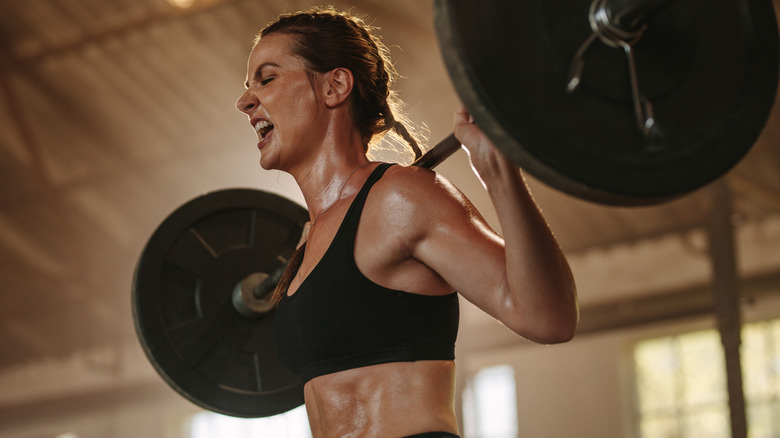 Compound exercises, such as barbell back squats and deadlifts, are particularly effective at building strength. That’s why powerlifters and other strength athletes perform these movements every time they train. A 150-pound woman who’s just getting started with weight training should be able to bench press 44 to 73 pounds and squat 74 to 115 pounds, according to Strength Level. Tia-Clair Toomey and other female CrossFit athletes can squat up to 335 pounds and deadlift more than 400 pounds (per CrossFit).

Weight training can increase your power, strength, and endurance while keeping you lean and trim. “Can it make you bulky? Sure, but you have to put in a ton of time in the weight room,” says competitive weightlifter Sara Carr (via Insider). “It’s a really slow process. If you’re doing it three times a week, the increase in muscle is not going to be noticeable for most people,” she added.

Women have 15-20% lower testosterone levels than men, which limits their ability to gain mass, notes the International Sports Sciences Association. Simply put, heavy lifting won’t make you look bulky or masculine. Instead, you’ll become stronger and last longer in the gym. Wouldn’t it be nice to be able to carry your luggage or grocery bags without taking a break every few minutes?

When you lift heavy weights, your bones become stronger 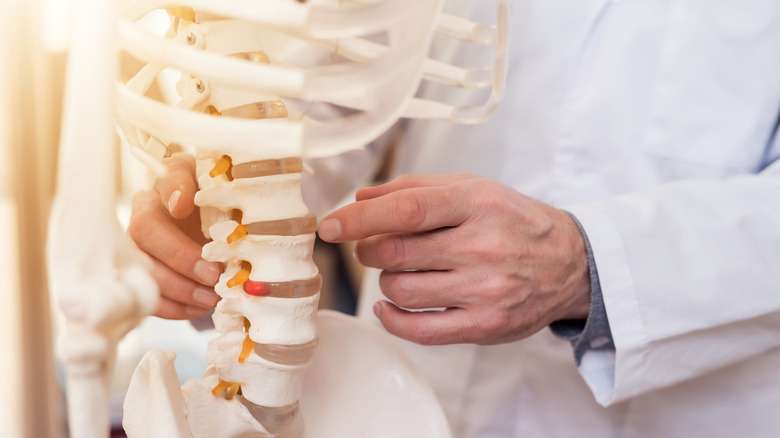 This form of exercise does more than just keep you fit. It also promotes bone growth and slows age-related bone loss, leading to a lower risk of osteoporosis. The experts at Harvard Medical School say that it’s particularly beneficial for the bones of the spine, hips, and wrists. The same source reports that bone mass decreases by about 1% per year after age 40. Therefore, it’s even more important to stay active and lift heavy lifts as you get older.

Clinical evidence shows that strength training preserves lean mass and increases bone strength. Over time, it may help maintain bone mass density, lowering your risk of falls and fractures (via BioMed Research International). “If we place the bones under stress, the body will respond by sending the material that it needs to make those bones stronger,” John C. Garner, Ph.D., C.S.C.S. told Self.

When you lift heavy weights, the muscles surrounding your spine and joints become stronger. This can lead to greater mobility and prevent or reduce back pain, explains Spine Universe. Weight lifting may also help you lose the extra weight, taking some of the pressure off your bones. Just make sure you increase training volume, intensity, and duration gradually to prevent injuries.

You will feel more confident and enjoy better mental health 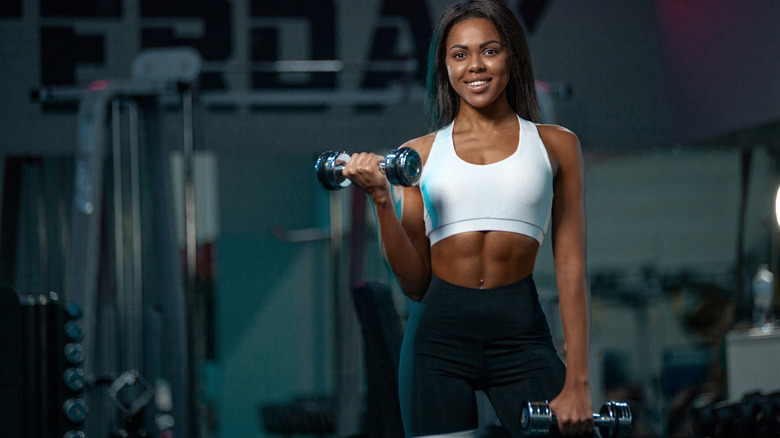 A quick workout can boost your mood and energy levels, no matter how tired you were before getting started. As you become stronger, you’ll also feel more confident and self-secure. Weight training is also a good way to fight stress and keep depression at bay (via The Washington Post).

For example, a 10-week study conducted on 341 women found that strength training may improve personal satisfaction and body image, as reported by the Journal of Extension. In other studies, this form of exercise has been shown to reduce depression symptoms (via JAMA Psychiatry). Further, a 2013 study published in the Archives of Internal Medicine suggests that weight training may also improve memory, brain plasticity, and other aspects of mental health.

Your brain releases serotonin, dopamine, and other feel-good chemicals when you lift heavy weights. At the same time, it improves sleep and makes you feel better about yourself, says the American Council on Exercise. “I’ve been doing CrossFit for just over two years now, and I have never felt more confident or as capable as I do now thanks to lifting,” said mom and self-described “mediocre athlete” Nichole Bennett (via Shape). “I feel like I can wear whatever the hell I want because I love my body so much, not only for how it looks but also for what it can do. Lifting is the best thing I have ever done for myself,” she added.