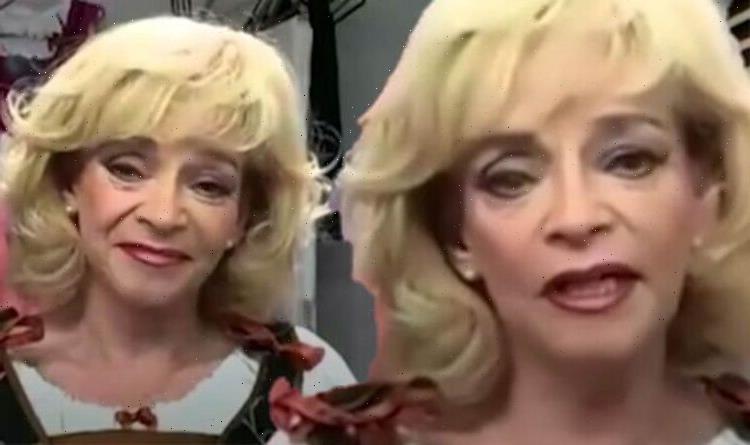 Speaking about the close relationship she and Challis had right from the beginning when appearing on The One Show earlier this year, Holderness said that she “still doesn’t believe he is gone,” and remains a close friend of Challis’ wife Carol. Similarly to Challis, Holderness watched the heartbreaking decline of Barbara Windsor. The pair shared the same agent and back in 2018 Holderness said how brave Windsor was for speaking out about the condition. Seeing first-hand the effects dementia and Alzheimer’s has on an individual, Holderness expressed concern for her own health, saying she was “petrified” of developing the disease.

“I used to have a photographic memory but now I struggle.”

The star recalled a time where Windsor was as “sharp as a razor” at remembering scripts, but went on to say that she herself now finds herself forgetting lines, keys and people’s names.

The Centres for Disease Control and Prevention explains that dementia refers to the general term for the impaired ability to remember, think or make decisions. These effects make it difficult for people to carry out everyday tasks.

The NHS explains that although it is normal for memory to be affected by stress, tiredness, certain illnesses and medication, those over the age of 65 who are becoming increasingly forgetful might be displaying early signs of dementia.

There are many different types of dementia, which can be easily confused with each other, but Alzheimer’s is the most common type of dementia, followed by vascular dementia.

The Mayo Clinic explains the key differences between the main types of dementia. Alzheimer’s disease patients have plaques and tangles in their brains. Plaques are clumps of a protein called beta-amyloid, and tangles are fibrous tangles made up of tau protein. It’s thought that these clumps damage healthy neurons and the fibres connecting them.

Vascular dementia is caused by damage to the vessels that supply blood to your brain. Problems with blood vessels can cause strokes or affect the brain in other ways, such as by damaging the fibres in the white matter of the brain. The most common signs of vascular dementia include difficulties with problem-solving, slowed thinking, and loss of focus and organisation, which tend to be more noticeable than memory loss.

Lewy body dementia occurs when tiny clumps of proteins known as Lewy bodies appear in the nerve cells of the brain. Lewy bodies cause a range of symptoms, some of which are shared by Alzheimer’s disease and some by Parkinson’s disease.

Common signs and symptoms include sleepwalking, seeing things that aren’t there (visual hallucinations), and problems with focus and attention. Other signs include uncoordinated or slow movement, tremors, and rigidity (parkinsonism).

Frontoemporal dementia is a group of diseases characterised by the breakdown of nerve cells and their connections in the frontal and temporal lobes of the brain. These are the areas generally associated with personality, behaviour and language.

Mixed dementia refers to when individuals have more than one type of dementia. The condition affects at least one in 10 people. Depending on the types of dementia a person has, symptoms will slightly differ.

Although there is currently no cure for dementia, an early diagnosis means its progress can be slowed and the individual may be able to maintain their mental function for longer.

For individuals like Holderness, who are struggling with mild memory loss, it might not indicate dementia but a condition known as mild cognitive impairment (MCI).

This is the stage between expected cognitive decline due to normal ageing and a more serious decline related to dementia. Characterised by problems with memory, language, thinking or judgement, friends and family may be able to notice that an individual’s memory has “slipped”.

The key difference between MCI and dementia is that an individual’s ability to carry out everyday activities is not affected by MCI. Instead, signs of MCI may include the following:

It is important to note that MCI may increase your risk of later developing dementia caused by Alzheimer’s disease or other neurological conditions. But some people with mild cognitive impairment never get worse, and a few eventually get better.

Although it is impossible to prevent, the strongest risk factors for MCI include increasing age and having a specific gene, a gene also linked to Alzheimer’s disease.

Other medical conditions and lifestyle factors that have been linked to an increased risk of cognitive change, include: