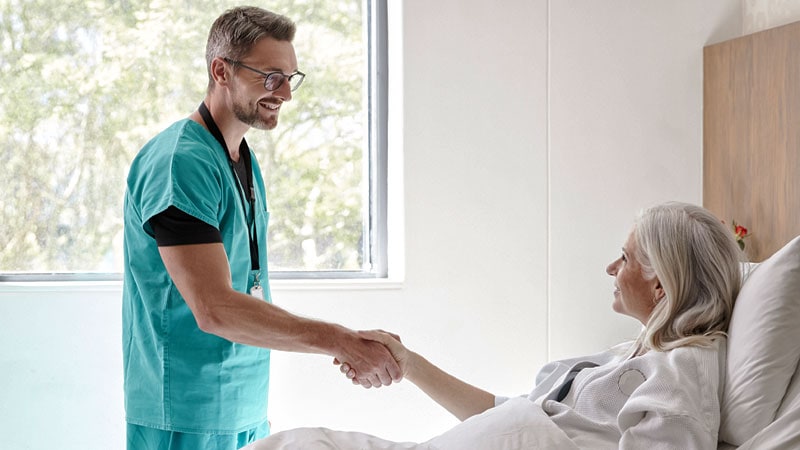 When there are several treatment options, the trend for doctors to discuss all options with their patients and for the patient to share in the decision-making can improve patient satisfaction and result in value care.

But such an approach is “only sometimes useful” when it comes to surgery, say two general surgeons from the University of Michigan, Ann Arbor.

“There are some scenarios that are so clear-cut that a discussion of treatment choices is futile” and “inappropriate,” comment Anne Ehlers, MD, and Dana Telem, MD, in a recent editorial in JAMA Surgery.

To illustrate their point of view, they give an example: “a 65-year-old person with hypertension…who is otherwise fit and healthy with a treatable colorectal cancer should absolutely be advised to have surgery…. Using shared decision-making in this setting is not useful and may lead to unnecessary confusion or distress for the patient,” they say.

“Rather than promoting a one-size-fits-all method of communication, we should tailor our discussion to meet the needs of each patient. An honest and transparent recommendation by the surgeon may do more to promote patient trust and autonomy than offering a choice, especially in cases where no choice exists,” they say.

The editorialists were responding to a study published in JAMA Surgery regarding how shared decision-making works in surgical consultations.

The idea of shared decision-making is to draw out a patient’s values and goals and tailor treatment accordingly, the editorialists explain. Past studies have shown increased patient satisfaction, better use of healthcare dollars, and other benefits, leading some to suggest that surgeon reimbursements should be tied to their use of shared decision-making.

However, the authors of the new study, led by Nathan Baggett, MD, an emergency medicine resident at Regions Hospital in St. Paul, Minnesota, said that their findings raise fundamental concerns about how the approach applies to surgery.

For their study, the team analyzed transcripts from 378 consults conducted by 43 surgeons at five US academic medical centers. They gauged how well surgeons performed on the five-domain Observing Patient Involvement in Decision-making (OPTION5) assessment, which assigns points on the basis of the extent to which physicians meet shared decision-making standards.

Patients were aged 60 years or older, had at least one comorbidity, and were considering major surgery. The majority of cases were for cancer indications, and the rest for cardiac, neurosurgical, or peripheral vascular problems. The average age of the patients was 71.9 years; just over half were men, and 83% were White.

Surgeons scored a mean of 34.7 out of a possible 100 points. Some barely used shared decision-making, while those who scored higher often did so when they were reluctant to operate, and then they usually used it to talk patients out of surgery.

Falling Short of the Ideal

Each surgeon in the study conducted at least three consults. Their median scores on OPTION5 ranged from 10 to 65 points.

Scores were highest ― a mean of 12.3 points out of a possible 20 ― on domain 3 of the assessment, the pros and cons discussion.

Scores were lowest ― a mean of 4.1 points ― on domain 2, fostering patient’s sense of partnership with their surgeon.

Surgeons who failed to mention they were there to help patients match treatment options with their preferences scored 0 points; they earned 20 points for ” ‘explicit support of patient/family in deliberation’. Examples: ‘My role is to provide you with information and to guide you’ in ‘the decision that you and I make together’.”

“Rather than conceiving of patient autonomy as an obligation to present a choice (and subsequently talk the patient out of that choice), surgeons may better show respect for patients by disclosing their reluctance and describing the source of this reluctance as it relates to the patient’s goals,” the authors comment.

Another issue is that sometimes surgeons fear “presenting an opportunity for patients to make the ‘wrong’ decision” when they believe “‘the stakes were too high to consider anything other than surgery’,” they say.

There was no significant association between OPTION5 scores and patient age, gender, and education, as well as surgeon age and gender and whether patients were considering cancer surgery or vascular surgery.

Longer conversations were associated with slightly higher scores, but there was a score of 80 for a 13-minute conversation.

“Skillful shared decision-making can be done in less than 30 minutes,” Baggett and his team note.

The study was funded by the Patient-Centered Outcomes Research Institute and the Greenwall Foundation. The investigators have disclosed no relevant financial relationships. Telem has received consulting fees from Medtronic.

M. Alexander Otto is a physician assistant with a master’s degree in medical science and a journalism degree from Newhouse. He is an award-winning medical journalist who worked for several major news outlets before joining Medscape and is also an MIT Knight Science Journalism fellow. Email: [email protected]