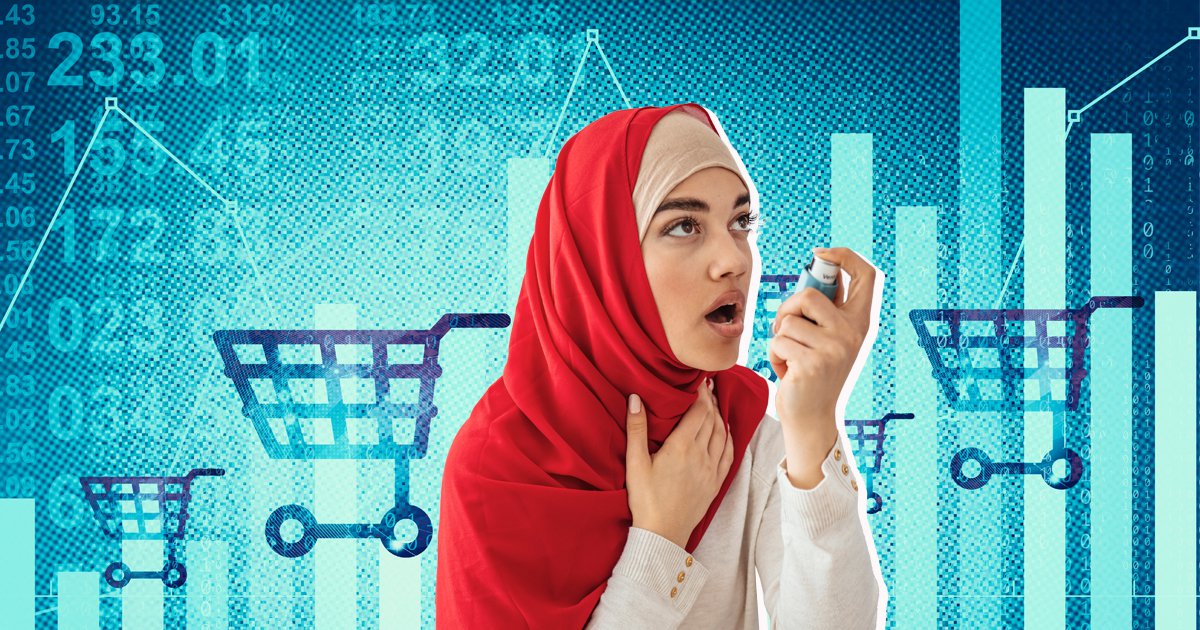 A lung charity warns that ‘with winter already the deadliest season for people with lung conditions, there could be a tidal wave of hospital admissions’ amid the cost of living crisis.

A new study has found that around one in one people in the UK with asthma, and a range of other lung conditions, have reported experiencing life-threatening asthma attacks after cutting back on medicines, heating and food as a result of rising costs.

They claim to have suffered from severe attacks after being forced to make significant changes to their healthcare – according to the research conducted by leading lung charity Asthma + Lung UK.

Asthma is a common lung condition affecting 5.4million people in the UK, so these reports highlight a massive problem.

The charity surveyed more than 3,600 people with lung conditions, including asthma, chronic obstructive pulmonary disease (COPD) and bronchiectasis and found that almost half of the respondents said their condition had worsened since the cost of living crisis began, with many needing emergency treatment.

Impact on people with respiratory conditions

This is true for Ben Robinson, 42, from North London, who has recently noticed a decline in his health.

Ben has severe asthma and COPD, which he manages by using a nebuliser, but in order to cope with rising costs, he’s had to cut back on fresh food and – with his energy bills taking up a third of his income – he is worried he may also have to cut back on using his nebuliser, too.

‘I’m genuinely worried that the cost of living rises are going to send me to an early grave,’ Ben said.

‘I’ve been hospitalised many times in winter because cold air and colds and viruses trigger my asthma and leave me fighting for breath.

Due to both of his respiratory conditions, Ben hasn’t been able to work for several years and is reliant on Universal Credit and Personal Independence Payment (PIP).

A few weeks ago, Ben was hospitalised after experiencing a severe asthma attack, and while he is recovering at home, getting out and about is now very difficult.

‘There’s a lot of anxiety bubbling in me about how I’m going to be able to afford the electricity needed to keep running my nebuliser,’ he said.

‘I try not to think about how I’ll manage this winter. If I’m cold, I’m prone to chest infections, and I can and will have more flare-ups that may land me in hospital. It’s a constant worry.

‘I’m constantly worrying about money. My lung condition’s getting worse, partly because I feel so stressed all the time.’

‘Warm homes, regular medicine and a healthy diet are all important pillars to good lung condition management – but they all come at a cost.

‘We are hearing from people already reporting a sharp decline in their lung health, including many having life-threatening asthma attacks.

‘With temperatures beginning to fall and further energy price hikes looming, we’re seriously worried that when winter bites, it will tip the country into a public health crisis.

‘Lives are at risk if the Government doesn’t step in to help people with lung conditions, including ending unfair prescription charges and providing financial support for people who face extra energy bills for medical equipment.

‘As part of the End Fuel Poverty Coalition, we are calling on the UK Government to provide more support for people on low incomes so they can afford to keep their homes warm this winter.’

Ultimately the charity is urging the Government to provide targeted financial support, particularly towards increasing energy, food and prescription prices, to help people with lung conditions stay well this winter in the face of rising costs.

The survey also found that 90% of people with lung conditions had already made significant changes to cope with the rising cost of living, with 63% of respondents eating less and buying less food, which can lower people’s immunity, putting them at increased risk of viruses.

A further 15% said they are cutting back on inhaler usage to make them last longer, 5% are borrowing medicines from someone else, and 6% are not collecting their prescriptions.

Almost half of those surveyed said that making these changes ultimately worsened their lung condition, and not having the heating on could have very severe consequences for their health, with 7% having to seek emergency treatment, including going to A&E.

‘Cold air is a trigger for life-threatening asthma attacks and COPD flare-ups. In the longer-term, cold homes are a hotbed for mould and damp, which alongside cold air, are also common lung triggers.

‘Breathing in mould spores can also cause a lung condition called aspergillosis, which can cause shortness of breath, wheeze, weight loss and a high temperature.’

Other charities have also issued stark warnings about the impacts of the cost of living crisis.

A June 2022 survey conducted by the Cystic Fibrosis Trust found that 87% of people with CF survey said they were worried about the cost of living.

It found that a third of respondents with CF missed essential hospital appointments due to how much it costs them to attend, while 30% ended up having to prioritise one ‘basic essential’ over another.

‘Our latest research shows one in three people are missing hospital appointments due to cost, and one in three run out of food before they have money to buy more.

‘With energy bills already double what they were last year and rising food costs, people could be at risk of severe health problems if they can’t afford to heat their homes or eat properly.’