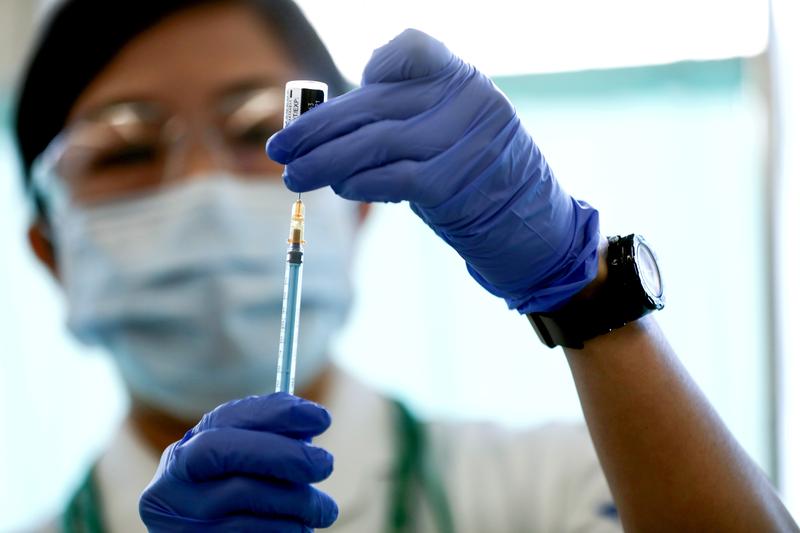 TOKYO (Reuters) – Japan is gearing up to offer COVID-19 vaccinations to around 2,500 Olympic and Paralympic athletes and support staff, using shots donated for the Games amid public anger over the slow pace of the country’s vaccine rollout.

With fewer than three months until the Olympics begin, Japan is struggling to contain a surge in coronavirus cases and a majority of the population want them cancelled or postponed for a second time.

Only about 2.6% of the Japanese population has been vaccinated at this point, and reports last month that athletes would be prioritised prompted anger on social media.

But last week, Pfizer Inc and its German partner BioNTech SE said they would donate doses of their COVID-19 vaccine via the International Olympic Committee (IOC) to help inoculate athletes and their delegations participating in both the Olympic and Paralympic Games.

Officials at the Japan Olympic Committee and Japan Paralympic committee said on Wednesday they are currently asking each athletic federation how many people want to be vaccinated and when this should take place.

“Our officials are saying we’ll make sure we don’t cause trouble for the overall population,” said Miho Kuroda at the Japan Paralympic Committee.

A report in the Yomiuri Shimbun daily said vaccinations could start as early as June, but the officials said the timing, as well as other details, such as who would give the inoculations, remained unclear.

Japanese regulations say only doctors or nurses can give the shots, which has slowed the country’s overall rollout. Dentists also gained permission last month.

The IOC, organisers in Japan and the Japanese government have repeatedly vowed that the Games will take place as scheduled from July 23-Aug. 8, although criticism remains rampant both at home and abroad.

On Tuesday, a New York Times essay titled “A Sports event shouldn’t be a Superspreader” called for the Games to be cancelled.

“It’s time to listen to science and halt the dangerous charade,” it added.

While Japan has been spared the worst ravages of the pandemic, 11,000 people have died and the medical system has been severely stretched by the country’s latest surge. Tokyo recorded 925 new cases on Tuesday.