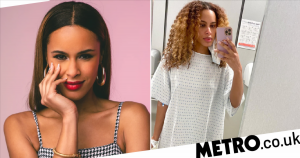 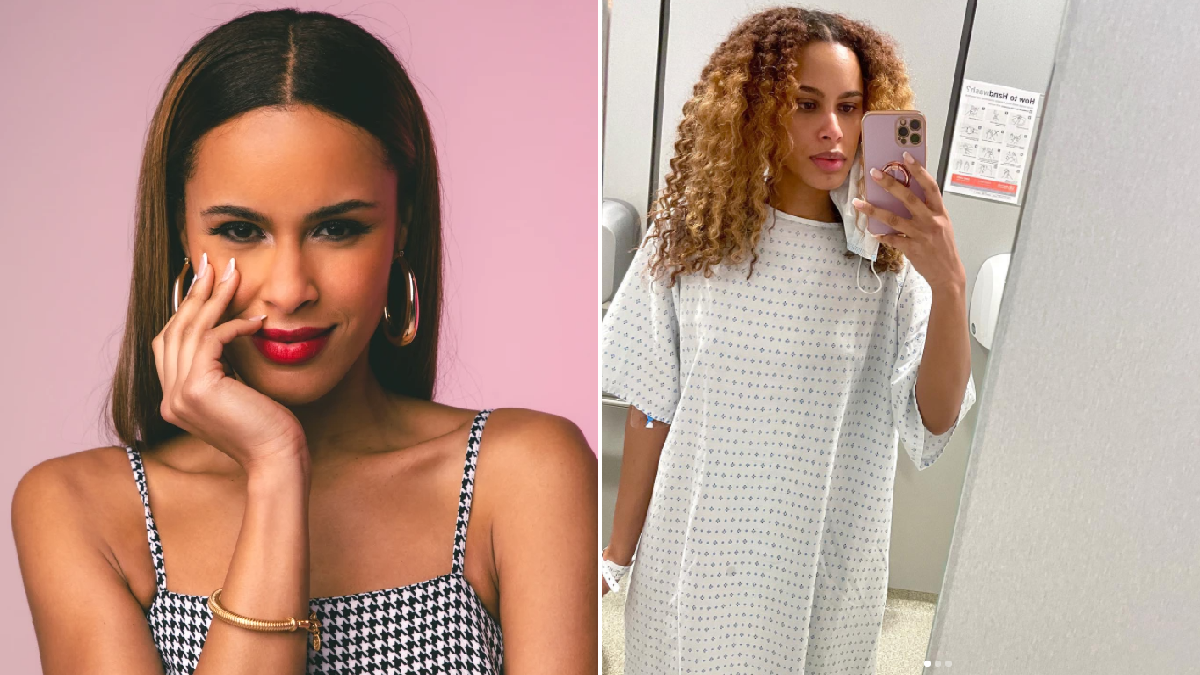 On average, it takes eight years to be diagnosed with endometriosis.

It’s a journey that broadcaster and sports presenter Anita Nneka Jones knows all too well.

Finally diagnosed in 2019, the 31-year-old spent her teens and 20s struggling with debilitating symptoms, but due to a lack of clear communication she thought what she was going through was normal.

Anita, who is from London, visited the doctor for the first time when she was just 14 because her periods were so painful, but the embarrassment and stigma associated with women’s health concerns proved a barrier.

‘Trying to explain to a male doctor that you feel like you’re giving birth to something the same size as your cat, or that there’s a weird stabbing pain in your private area is stressful,’ Anita tells Metro.co.uk. ‘Not to mention at 14. I just didn’t have the accurate vocabulary to explain to many people what I was feeling or what was going on in my body.

‘It’s this gap in knowledge as to what is a normal period and what isn’t that is a huge obstacle to diagnosis.’

At school, Anita’s performance suffered because she had to miss days every month because of the intensity of her period pains.

‘The pains varied from feeling like a metal wire coat hanger was being scraped across my private area, to intense stabbing, pinching near my right pelvic area and migraines,’ she says.

‘The intensity of these pains meant that paracetamol and ibuprofen no longer helped. I frequently took codeine and sadly to this day still need to take it in order to live as much of a normal life as possible.’

At 18 she started taking a pill that eased the symptoms a little, but she says her periods still ruled her life. In her late 20s, the pain started coming throughout the month, but it was only when a friend posted on Instagram that she had been diagnosed with endometriosis and listed her symptoms that Anita decided to take action.

‘I went from the girl who had accepted her periods were always going to be painful, to the woman who wouldn’t be denied medical attention,’ she recalls. ‘I demanded my GP send me to a gynaecologist for a referral.’

Eight months after her referral, a laparoscopy confirmed her condition.

‘When I got the diagnosis there were so many mixed emotions,’ says Anita. ‘Relief that I wasn’t mad all those years – that there really was something the matter with me. Hurt because I hadn’t been believed and it took more than ten years to get a diagnosis. And the feeling I still battle with to today is regret.

‘I’m not a pushover and like so many women I have no issues fighting for someone else’s problems, but in this instance I felt like a passenger and didn’t stick up for myself. That feeling of guilt forced me to see a therapist and it’s what pushes me to talk about it now.’

Endometriosis is a condition where cells like the ones in the lining of the womb are found elsewhere in the body, such as in the ovaries or the fallopian tubes.

Each month, these cells react in the same way to those in the womb, building up and then breaking down and bleeding.

Unlike the cells in the womb that leave the body as a period, this blood has no way to escape.

It’s a chronic and debilitating condition that causes painful or heavy periods, and it can lead to infertility, fatigue and bowel and bladder problems.

The condition is fairly common, with around 1.5 million women in the UK living with it. It can affect all women and girls of childbearing age.

Symptoms include having pain in your lower tummy or back, which usually gets worse during a period, period pain that stops you doing your normal activities, pain during or after sex, pain when peeing or pooing during your period, and feeling sick, constipated or having diarrhoea during your period.

Now, in her 30s, Anita is dealing with the impact of this condition on her fertility – which she was shocked to find out has already been affected.

Getting pregnant when you have endometriosis can be more difficult than usual, this is because the condition can cause problems with the pelvic structures and the follopian tubes, as well as changing the hormonal environment of the eggs.

Endometriosis does not necessarily cause infertility, but there is an association with fertility problems. For this reason, Anita decided to look into freezing her eggs to give her the best chance of getting pregnant in the future.

‘I had heard endometriosis could affect fertility, but didn’t really understand how or why,’ says Anita. ‘I asked whether I needed to consider egg freezing – I didn’t even know what that entailed – but I had heard of it and thought to ask.

‘I remember my consultant’s answer like he said it yesterday. He said I didn’t need to consider egg freezing for now (when I was 29) because women’s egg production only starts to decline at 32. Should I reach 32-years-old and find that I’m not in a position to have kids, then, he said, I should consider it.’

For Anita, that was that. She put egg freezing firmly to the back of her mind and focused her attention on learning how to live a better life with this condition.

She had surgery for the endometriosis on her abdominal wall and bowel. Then she was fitted with the coil – an experience she describes as feeling ‘like a bomb had exploded down there’ – but it worked, and for six months her period wasn’t a worry in her life.

However, in February last year, Anita had a flare up which involved a heavy bleed, and doctors discovered that the endometriosis was growing back.

‘At the time of my first surgery, I wasn’t aware of just how high the recurrence rate was,’ says Anita. ‘Once you have it and you’ve been operated on, there’s a chance it’ll come back and you’ll need further surgery.

‘When this all started to become clearer, I sort the advice of an endometriosis specialist and she advised me to get an Ovarian Reserve Test (ORT) – especially if I ever wanted kids. She warned that another surgery could have detrimental effects on my fertility.

Anita was shocked to learn that her fertility had already been affected. The egg production for her age then, 30, was low. On the basis of those results, she decided to freeze my eggs.

‘Given how low my egg production was I advised to purchase a pack of three cycles,’ she says. ‘This wasn’t an easy decision, as you have to do it privately. Egg freezing is expensive. The NHS won’t help you unless you’re in a relationship and have been trying for a child for a while.

‘My egg freezing investment almost feels like a mortgage investment, albeit I cannot see the investment and may not ever, but I couldn’t live with the regret if I didn’t try this.’

The first attempt didn’t go to plan. The coil prevented Anita from bleeding, but you need to bleed in order to start the egg freezing process. Even with a drug to try to cause a bleed, it never happened. However, the second time she did, so the process could begin.

‘The next step were the injections, scans and blood test,’ says Anita.

‘For a woman aged 30-35, it’s expected her body would produce between 10 and 15 eggs after the injection process. In my case after the first cycle, I produced just four.

‘Being told my body could only produce four eggs was also a reality check. That’s when it hit me, my fertility really wasn’t at the levels it should be.’

For the second cycle the result was even worse. Anita produced just three eggs.

‘It hurt all over again,’ she says. ‘I thought I had accepted it all but clearly hadn’t and the same feelings of guilt and regret came back, but this time because I hadn’t explored egg freezing sooner.

‘Had I have been advised differently by that consultant when I was 29 I would have looked into this sooner.’

Fertility clinics recommend you freeze as close as possible to 15 eggs to stand of a chance of the eggs eventually turning into embryos should you need them. Anita has one more cycle of egg freezing to go, but she has accepted that 15 may be a push for her body.

‘I’m grateful nonetheless that I’m even able to freeze any,’ she adds.

But the heartache of this process wasn’t only about the number of eggs Anita was trying to produce. There was the added complication that the process of egg freezing was actually aggravating her endometriosis – and making her symptoms worse.

‘With egg freezing, you’re injecting yourself with high doses of hormones which can send your system into a bit of a frenzy,’ she explains. ‘The pains towards the end of the injection phase were unbearable for me – which I have since learned is common in women with Endometriosis.

It’s a vicious cycle. The endometrioses is harming Anita’s chances of having children in the future. The egg freezing and testing is then worsening the endometriosis. Anita is finding all of this out the hard way, and now she wants to raise awareness of how these sorts of surgeries and procedures that can impact fertility – alongside the benefits of egg freezing.

‘The starting point for me in getting more awareness out there is educating young girls that painful periods are not normal,’ she says.

‘I was consistently told by medical professionals that some women suffer from worse pains than others and there’s really not much you can do about it, other than take painkillers. Beyond this, we all need to be taught more about periods in general because the attitudes held are so pervasive and stop women seeking help – or make them feel embarrassed in the workplace if they were to say they feel ill because of their period.

Anita says she wishes more women were told about the options of egg freezing in their mid-20s, and encouraged to test their fertility earlier.

‘An ORT test empowers you and gives you the power to be the key decision-maker in your life,’ she says.

‘I feel like with my endometriosis and now this egg freezing, I’ve almost felt like a passenger and not in control of my own life. It’s shattering and I really don’t want anyone else to go through it. Luckily, my egg freezing package includes therapy because I’ve needed it.

‘Fertility isn’t a joke. There’s so little we are actually really taught about it and I wish when I had originally been diagnosed with endometriosis, someone had sat me down and told me the real consequences this condition and the surgery can have on your fertility.

‘It makes sense to me now, but back then I was dealing with the emotional trauma of being told the pains I had been experienced were “normal.”‘