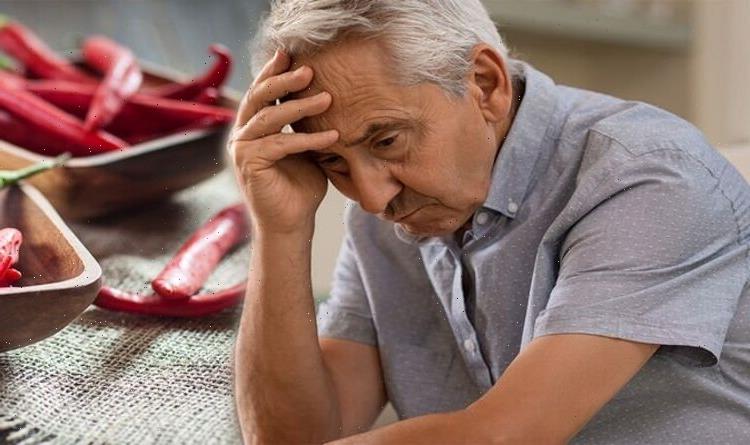 Dementia is a term used to describe a group of symptoms affecting memory, thinking and social abilities severely enough to interfere with your daily life. It isn’t a specific disease, but several diseases can cause dementia. A study has found a surprising food type which for non-overweight individuals, could put them at risk of developing the brain degenerative condition.

A study by the University of South Australia shows a spicy diet could be linked to dementia.

A 15-year study of 4582 Chinese adults aged over 55 found evidence of faster cognitive decline in those who consistently ate more than 50 grams of chili a day. Memory decline was even more significant if the chili lovers were slim.

The study, led by Dr Zumin Shi from Qatar University, showed that those who consumed in excess of 50 grams of chili a day had almost double the risk of memory decline and poor cognition.

“Chili consumption was found to be beneficial for body weight and blood pressure in our previous studies. However, in this study, we found adverse effects on cognition among older adults,” Dr Zumin said.

For the purposes of the study, the team included both fresh and dried chili peppers towards consumption but excluded sweet capsicum peppers—AKA bell peppers—and black pepper from their counts.

Results found that those in the study over the age of 55 who ate more than 50 grams of chili each day saw their risk of cognitive decline, memory problems, and dementia nearly double.

Data also found that skinnier participants were more likely to suffer memory loss if they ate a diet heavy in spicy foods.

Capsaicin is the active component in chili which reportedly speeds up metabolism, fat loss and inhibits vascular disorders but this is the first longitudinal study to investigate the association between chili intake and cognitive function.

Those who ate a lot of chili had a lower income and body mass index (BMI) and were more physically active compared to non-consumers.

Researchers say people of normal body weight may be more sensitive to chili intake than overweight people, hence the impact on memory and weight.

Contrary to the results of the study at hand, other research has found that spicy food can have considerable health benefits in other parts of the body.

The findings showed that compared to people who rarely or never ate chilli peppers to those who did and saw a 23 percent relative reduction in cancer-related deaths and a 25 percent reduction in early deaths overall.

There are a number of risk factors for dementia you cannot change but increasing evidence points to ways you can influence the risk.

One modifiable risk factor is cardiovascular disease (CVD) – a disease that damages the heart or makes it harder for blood to circulate around the body.

“CVD can greatly increase a person’s risk of developing dementia,” warns the Alzheimer’s Society (AS).