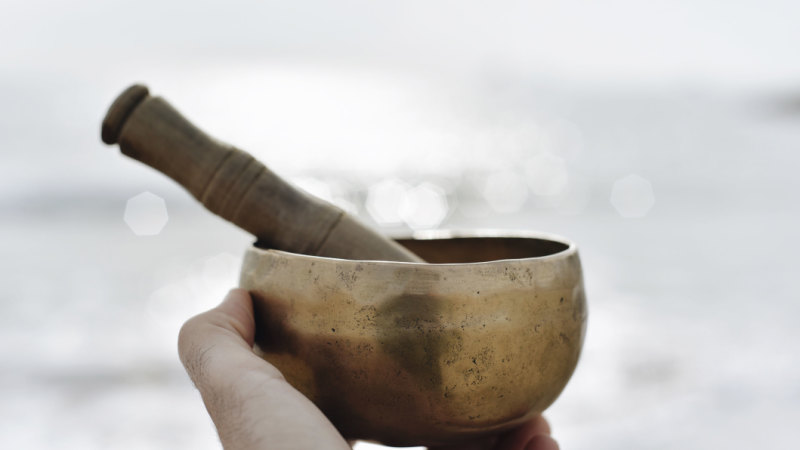 It's 7pm on a wintry Melbourne evening and I'm in a room full of strangers, soaking in a bath. No, not filled with water. Rather, I'm partaking in a ritual known as a "sound bath" (also referred to as "sound healing").

I've been lying here for half an hour as a myriad of sounds wash over me. There's the deep ringing of Tibetan and crystal singing bowls, the plinking of bells, and the melodious voice of our sound healer, Liz Millar. 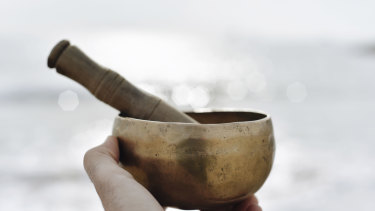 There’s been a recent rise in popularity, partially relating to our increasing desire to tap into consciousness, and interest in alternative health remedies.Credit:Stocksy

I'm lying on a yoga mat, covered by a blanket. Save for the flicker of candles and orange glow of rock-salt lamps, the room is dark. The word that springs to mind is "cocooned". I am cocooned: in darkness, warmth and sound.

And then, piano notes waft through the room, and my ears latch on to their intricate beauty. Soon, the Tibetan bowls break through, vibrating in effortless circles. I not only hear them, but also feel them viscerally.

I arrived here earlier in a rush. It had been a hectic day (as usual), and I was more than a little hesitant about the whole idea of a sound bath. As someone who's never even meditated, it sounded a bit out there. What if I hated it? How would I endure a full hour of such an experience?

It doesn't take long for my hesitation to subside. Worst comes to worst, I figure, as I snuggle under my blanket; it's far more relaxing than putting the kids to bed. But as the session continues, something happens. My constant flicker of thoughts starts to fade, my breath begins to slow. I let go.

So what is a sound bath? "Immersion in beautiful sounds and vibrations created by musical instruments and voice that can facilitate balance and well-being for your body, mind and spirit," explains Millar, who calls it a "relaxing, meditative experience" that can lead to healing and self-discovery.

Sound baths are not a new phenomenon. Millar says they can be traced back to at least ancient Egypt. Yet, she says, they've seen a recent rise in popularity, partially relating to our increasing desire to tap into consciousness, as well as growing interest in alternative health remedies.

Research backs the healing ability of sound, with a study in the Journal of Evidence-Based Integrative Medicine in 2016 finding a "significant difference" in mood, tension, anxiety, physical pain and spiritual wellbeing in response to singing-bowl sound meditation.

Meanwhile, a 2014 paper in the American Journal of Health Promotion found that blood pressure and heart rate responses were "enhanced" by Himalayan singing bowls before a directed relaxation.

And using sound as therapy makes sense. After all, we all have favourite tunes we wallow in during turbulent times, and there's nothing as life-affirming as letting yourself go at a concert or music festival.

Millar agrees that music can be more than just enjoyable but says the difference with sound baths is the intention: when you combine sound with positive intention, healing can occur. And the sound offered at such a place is organised and harmonious, with the added benefits of gentle physical vibrations. "Such sound has a literal physiological effect on your physical body as well as your emotions, your mind and your spirit," she says. "So every single level is being affected by those sound waves."

One of the parts I enjoy most is the lack of instructions. We're not told we have to do anything in particular during our session; we don't have to prescribe to any philosophy.

"It's not like you need to be convinced of anything," Millar explains. "You just hear and receive the sounds, you experience them, you have your own unique experience to it."

And that experience turns out far better than I'd hoped. After bathing in a kaleidoscope of sound, I emerge feeling calm, nourished, serene. Yes, it's deeply relaxing, but I can see how it could be therapeutic, too.

This article appears in Sunday Life magazine within the Sun-Herald and the Sunday Age on sale July 7.