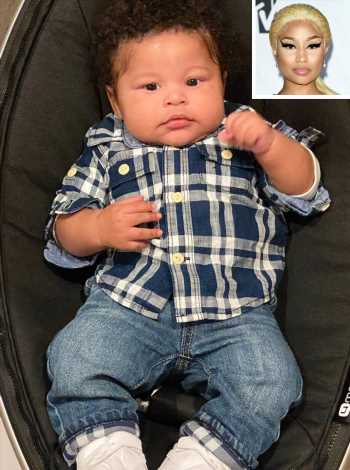 Nicki Minaj’s baby boy is ready for his closeup!

On Saturday, the rapper, 38, shared new photos of her 3-month-old son, whom she shares with husband Kenneth Petty, giving fans their first look at his face.

“#PapaBear thank you so very much for choosing me to be your mama 🎀🦄🙏 ,” she captioned a loving tribute, which included photos of her newborn lounging in adorable outfits and designer onesies. In one sweet snap, her baby even wore a “Papa Bear” necklace, in a nod to her affectionate nickname for him.

“Wishing you guys a happy & prosperous New Year. Thank you for your love & support throughout this journey. It’s meant so much to me. Becoming a mom is by far the most fulfilling job I’ve ever taken on,” she added. “Sending love to all the superhero mothers out there. Big hugs to all the women who have been pregnant during this challenging time.” Minaj also shared a sweet video of her son on Twitter.

“Best of 2020,” she wrote alongside the clip, in which her son adorably showed off his big smile.

The sweet posts came just days after Minaj replied to a fan who asked whether the newborn looked more like his mother or father. “’ll let you b the judge of that,” she wrote.

Minaj previously gave fans their first glimpse of her son in October — posting a photo of his foot — while celebrating her first wedding anniversary with Petty.

During a recent Q&A on social media, the rapper opened up about her experiences with motherhood and shared new details about the day she gave birth to her baby boy.

Minaj, who welcomed her son in September, revealed that her water broke after had finished taking a shower and asked her husband to "rub [her] back."

"As soon as I started scooting over to him in the bed I just felt the water start coming out. I was weirdly calm & I quietly said 'omg, I'm about to be in labor,'" she recalled.

The rapper went on to share that she was in labor "all night" and had a vaginal birth with an epidural.

"I pushed for 2½ hours. Only b/c first the epidural didn't wear off enough for me to feel myself pushing. Once I was able to feel the pain I pushed him on out," she explained.

"Happy 3 months Bday #PapaBear Mommy & Daddy love you soooo much," Minaj wrote alongside a picture from her pregnancy. "You’re the best boy in the whole wide 🌍."

Minaj gave birth to her baby on Sept. 30 in Los Angeles, a source previously confirmed to PEOPLE. She later revealed the sex of her new addition while raving about entering motherhood.

"I am so grateful & in love with my son," she shared. "Madly in love. My favorite liddo boy in the whole wide world."