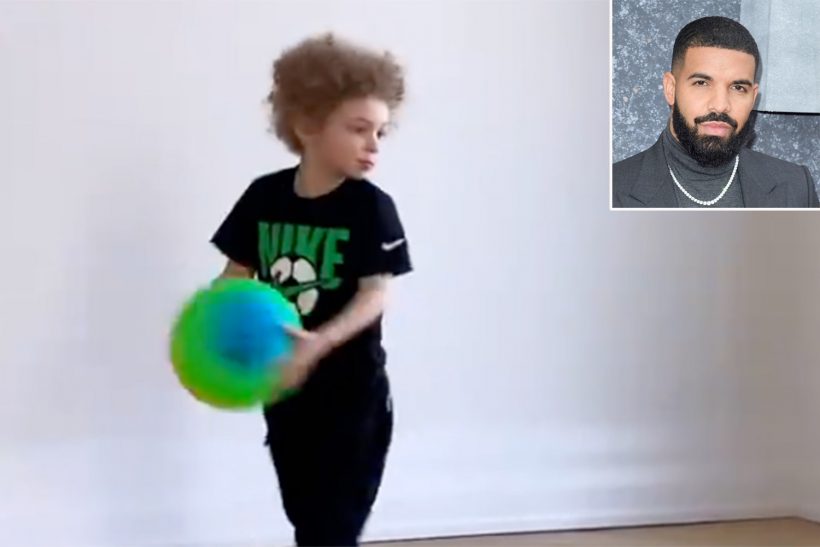 Drake has a little baller on his hands!

On Sunday, the "Laugh Now Cry Later" rapper, 34, shared an adorable video of his 3-year-old son Adonis playing basketball on his Instagram Stories.

In the clip, the toddler can be seen shooting hoops with a colorful ball. After making his first shot, the young boy holds up two fingers before impressively scoring a second basket. RELATED: Drake Shares Photo of Son Adonis on His 'First Day of School': 'The World Is Yours Kid'

This wasn't the first time Drake gave fans a glimpse of his son's athletic abilities.

During a 2018 episode of LeBron James' unscripted HBO series The Shop, he raved about his "beautiful" child and how the then-1-year-old was "already in the pool shooting the basketball."

Drake's video of his son playing basketball comes a year after the Grammy winner first posted photos of his son, whom he shares with artist and former adult film star Sophie Brussaux.

Before then, he had offered glimpses into his life as a dad — sharing shots of Adonis' artwork, Father's Day gifts and birthday party decorations — but never any photos of his child. Want to get the biggest stories from PEOPLE every weekday? Subscribe to our new podcast, PEOPLE Every Day, to get the essential celebrity, entertainment and human interest news stories Monday through Friday.

Last May, the "God's Plan" hitmaker opened up about his decision to introduce his son on social media, revealing that it was not a move he had "talked to anybody about or anything I planned."

"It was great for me. It was great to just share that with the world," he said on an episode of episode of Young Money Radio with Lil Wayne on Apple Music. "I just woke up one morning and I was like, you know what? This is just something that I want to do."

"I want to be able to go places with my son and share memories with my son. I don't want to feel like just because of a life choice I made to be a 'celebrity' that I got to make everybody live under this blanket," he added. "I just wanted to free myself of that."

Recently, Drake gave a nod to his son on the song "Lemon Pepper Freestyle," in which he rapped about dropping Adonis off at school and attending parent-teacher conferences.

"Yeah, dropped him off at school, big day for my lil' man/ Recess hits, daddy prolly made another M/ School bell rings and I'm out there to get him again," he rapped midway through the 6-minute track. "Yeah, teacher-parent meetings, wives get googly-eyed/ Regardless of what they husbands do to provide/ Askin' if I know Beyoncé and Nicki Minaj."