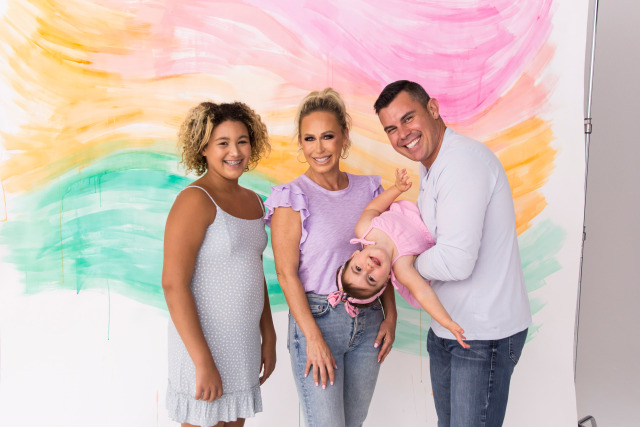 For Shannon Nuques starting a business is nothing new. The Los Angeles-based entrepreneur and mom of two cofounded GlamGlow in 2010. The skin care company well-known for its Hollywood-inspired aesthetic and mud masks was purchased by Esteé Lauder in 2014, but Shannon still calls it her baby. Now, she has a new baby — well, two new babies: her little girl Sienna, and her upcoming baby clothing line GracynSky.

Nuques cofounded GracynSky with her husband Luciano Nuques, but daughters Sienna, one, and London, 12, are the real creative forces behind the brand and have inspired every aspect of the business, including its name — GracynSky is a mashup of Sienna and London’s middle names.

“We were driving in the car and we were going back and forth like, ‘Well, what can we call this?’ And I was, like, ‘GracynSky,’” Luciano said. “It came so naturally.”

Shannon and Luciano thought of the idea when trying to find baby clothes for their daughter Sienna. They found options that they liked, but they felt something was missing: color, joy, surprise. Shannon was also frustrated by how quickly special patterns and prints would sell out. The couple’s business plans were temporarily put on hold due to the COVID-19 pandemic, but after months in isolation, they realized how passionate they were about the brand and decided to move forward.

To start, the Nuqueses knew they wanted to collaborate with artists for the brand’s line, which includes onesies, a swaddle cloth and a towel. Shannon knew the perfect artist to tap first: Donald Robertson, who had collaborated with GlamGlow for special launches like its Sonic the Hedgehog mud mask.

Shannon, Luciano and London worked with Robertson to create playful designs, most of which include animals and vibrant colors.

“The brand is all about playful pops of color and these with these fun, artistic, unique prints,” Shannon said.

Shannon is proud and inspired by her daughter London, who worked with Robertson to design the birthday print, and said that Sienna has also been a major inspiration for the GracynSky team.

“She’s our creative muse.…When we get the rolls of fabric to approve, we open them for the first time and see which one she gets the most excited about,” Shannon said. “She definitely has an opinion,” joked Luciano.

“You just see the joy in her when she sees it and that’s what we want other families to experience when they open our packaging or put the items on their children,” Shannon explained. “It’s just that pure joy that they give you when they’re excited about something.”

While cuteness is a top priority for GracynSky, so is functionality. Not every baby is one size fits all, noted Shannon. They designed the onesies, made from bamboo, to feature double zippers for easy diaper changes and extra length for a growing baby. The footies and mittens are also convertible, so they can be folded up or down.

Shannon and Luciano have also made a commitment to the L.A.-based chapter of Newborns in Need, a charity helping premature, ill and impoverished babies.

“We decided to go with Newborns in Need really to set an example for our girls.…We’ve got to do our best to help every child in need,” Luciano said. “We can help make the world a better place by giving every kid a better start so it’s definitely a labor of love.” The Nuqueses are partnering with Newborns in Need to promote their message and will be donating a portion of their proceeds to the charity.

GracynSky is set to launch Aug. 9 with plans to collaborate with more artists and expand their offerings…with inspiration from Sienna Gracyn and London Sky, of course.

“It is a family business. The girls are very involved with everything we do,” Shannon said. “For us, it’s important to give some homage to them. They are the reason why we’re doing what we’re doing.”