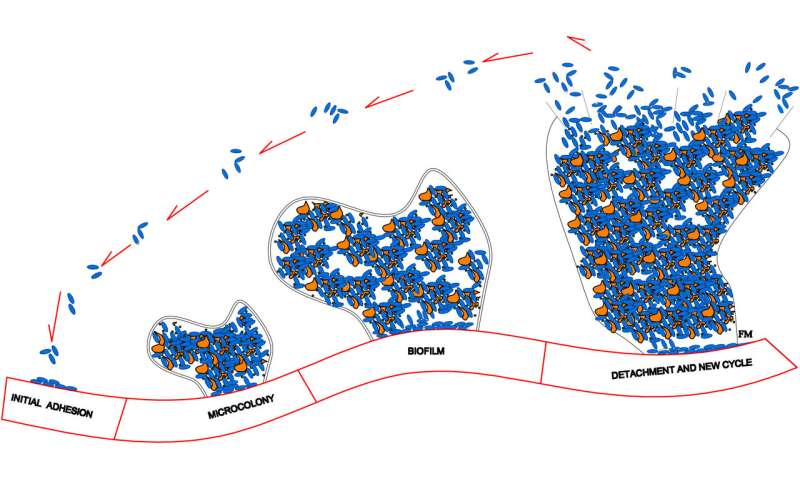 Medical practitioners routinely outfit patients with devices ranging from cardiovascular stents, pacemakers, catheters, and therapeutic lenses to orthopedic, breast, dental, and cochlear implants and prostheses. These accessories restore mobility and improve the lifestyles of millions of people. Yet despite the creation of new biocompatible materials, medical implants remain especially vulnerable to bacterial infection. Bacteria are either preexistent or inoculated during the surgical procedure, which weakens the host’s defense mechanisms. In fact, nearly 15 percent of all in-hospital infections among surgical patients are related to indwelling medical devices.

Upon adhering to an implant’s smooth surface, the bacteria aggregate and produce a biofilm—a protective environment comprised of DNA, proteins, and polysaccharides. It is important to inhibit formation of a biofilm because it greatly increases a bacterium’s resistance to both the host’s immune system and antibacterial agents. In many cases, the only way to effectively eradicate an infection once a biofilm has formed is to remove the implant entirely, clear out the bacteria with antibiotics, and ultimately replace the implant. This process is time-consuming and expensive, and poses a significant health risk to the patient.

Implant infections are typically highly resistant to systemic antibiotherapy and natural host defenses. Traditional systematic administration of antibiotics results in a low concentration at the target site, rendering many of these drugs ineffective. Yet while higher concentrations kill more bacteria, they also cause adverse side effects—like toxicity and renal or liver complications—in patients. Implants with anti-adhesive surface coatings, which release antibacterial drugs while simultaneously limiting adherence, may seem like an effective way to combat bacterial infections. However, these coatings can negatively affect the fusion between implant and bone by preventing bone cells from adhering to the prostheses.

A recent advancement in the medical community involves the use of clinical, drug-eluting coatings that disperse therapeutic agents into the polymeric surface of metallic implants. Upon contact with the interstitial fluid that surrounds cells, the biocompatible polymers in the porous coating release the drugs to targeted organs or tissues over an extended period of time. In an article publishing this Thursday in the SIAM Journal on Applied Mathematics, Raquel Bernardes, José Ferreira, Paula de Oliveira, Mario Grassi, and Manuel Nhangumbe present a mathematical model that explores the interactions between bacterial populations, the materials they colonize, and drugs delivered from the medical devices to which they adhere. In short, they are interested in polymer porosity and bacteria’s dependence on and reaction to both the polymeric coating and the drug.

“One of the most common approaches for preventing biofilm formation is the dispersion of antimicrobial agents in an implant’s polymeric coating,” de Oliveira said. “In medical devices like drug-eluting cardiovascular stents, therapeutic lenses, and intraocular implants, the drug is dispersed in biocompatible and biodegradable polymeric matrices and the release obeys a predefined pattern.”

When constructing their model, the authors make a handful of assumptions pertaining to the biological, chemical, and physical interactions on the surface of the drug-eluting implant. One such assumption is that an initially-solid drug is dispersed in the biodegradable polymeric coating of the implanted medical device. “When in contact with the interstitial fluid, the drug dissolves and diffuses,” Ferreira said. “To consequently govern the behavior of the solid and dissolved drug respectively, we need two partial differential equations (PDEs). The solid drug dissolves because the interstitial fluid permeates the polymeric coating and enters in contact with the solid drug. So a third PDE is needed for the interstitial fluid.”

The researchers’ model is therefore comprised of a system of PDEs—of the convection-diffusion-reaction type—coupled with an ordinary differential equation (ODE). The ODE controls the time evolution of the population density of the bacteria attached to the implant’s surface, meaning that its solution depends on the solution of the PDE. For the sake of simplicity, the authors describe the bacteria’s density only as a function of time. An integral function, which represents the mass of drug released by the polymeric coating at a given time, connects the PDEs with the ODE.

The authors note that the porosity of the device’s coating does not in any way compromise the strength of the medical device itself. However, polymer porosity is certainly complex. “As porosity increases, two opposite events occur,” de Oliveira said. “A larger porosity leads to higher drug release levels, and we can expect a subsequent decrease in bacterial density. On the contrary, a higher porosity provides the bacteria with larger surfaces to adhere to and a higher likelihood of survival.” The team therefore treats the bacterial growth rate as a function of porosity to account for bacterial proliferation’s dependence on porosity.

Use of indwelling medical devices, implants, and prostheses will continue to grow with time and progressively incorporate innovative technologies such as tissue engineering, subcutaneous microsensors, and artificial extracellular matrices. Practitioners will therefore be increasingly reliant upon mathematical models that examine drug delivery from the polymeric coatings of these devices, test mechanical properties, and simulate various drug release scenarios. Such models bridge the gap between theoretical analysis and more practical outcomes, and help doctors understand patients’ immediate post-surgery responses and long-range defense abilities.